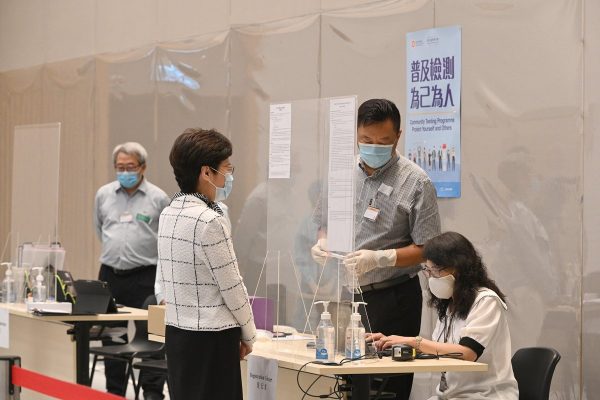 As Hong Kong’s fourth coronavirus wave shows signs of abating, authorities have begun plans to ease restrictions and launch a massive vaccination drive. Yet government measures are coming under more public scrutiny than ever before.

Following the passing of the controversial national security law last summer and a large-scale crackdown on the city’s pro-democracy protest movement, there has been drastic decline in trust between residents and authorities. In the past year and a half, people’s satisfaction ratings with the government have dropped to the lowest levels ever recorded since the city’s 1997 handover from Britain to China, according to the Hong Kong Public Opinion Research Institute.

The fallout is shaping public reactions to the government’s pandemic response.

When the Hong Kong government made its COVID-19 tracing app mandatory for eateries – now allowed to serve parties of up to four people until 10 p.m. – as well as other services, many expressed privacy concerns, HKFP reports. Some have opted to manually enter their details, while others have taken to buying cheap burner phones to circumvent tracing efforts.

This week, the Hospital Authority Employees Alliance (HAEA) called for a public boycott of the app, which it says is a tool for the government to spy on citizens. The union group was responsible for a massive medical workers’ strike last February protesting the government’s refusal to close borders with mainland China during the outbreak.

In response, the government accused the group of spreading “unfounded” information, insisting that the app doesn’t have any tracking functions and that records will only be kept on user’s phones.

Meanwhile, a massive voluntary vaccination rollout due to begin next week has also been met with concerns over a rushed decision, after experts advising the government recommended China’s Sinovac vaccine without waiting for endorsement from the World Health Organization. A survey in January by the Chinese University of Hong Kong’s medical school found that fewer than 40 percent of residents would be willing to take the Sinovac jab.

Following widespread skepticism over whether the decision was made under pressure from Beijing, the city’s health secretary on February 12 told Reuters that standards had not been lowered to accept Sinovac, and that “the government has not politicized any vaccine.”

Earlier this month, a spate of ambush-style lockdowns that began at the end of January also triggered widespread concern and anxiety. To contain the virus, the government targeted sites of infections in dense neighborhoods and sealed off entire residential blocks without warning. The lockdowns were lifted after residents were forcibly submitted to mandatory testing and the results were confirmed.

After the quarantines found only a limited number of cases, many questioned whether such drastic measures were necessary, even as officials argued that finding zero infections is an indication of success. The fact that many lockdowns took place in poorer areas of the city – where impoverished residents were already struggling to cope with the pandemic – also intensified public criticisms.

On February 15, the city reported just nine new infections – the first single-digit daily increase recorded since the fourth wave of the virus began in November. But over the past three days, the count of new daily cases has crept back up into the double-digits, ranging from 13 to 20.