Daniel Zhang, chief executive, said Alibaba was “closely monitoring the latest shift in US government policies towards Chinese companies” and noted that it would comply with new regulation.

In India, Mr Zhang said it halted operations of its popular UC Browser app and other innovation initiatives after New Delhi blacklisted it along with dozens of other Chinese apps. Mr Zhang said it would not have a material impact on its results.

“Globalisation is our long-term strategy, but in the near term we are closely monitoring the change of the geopolitical environment, and also the national policy of other countries, and we will adjust our strategies according to this change,” said Mr Zhang.

Hangzhou-based Alibaba increased revenues 34 per cent year on year to Rmb153.8bn ($22.2bn), ahead of the Rmb147.3bn forecast by analysts, with growth returning to its core Tmall and Taobao ecommerce marketplaces after stagnating in the first quarter.

“From a low price perspective they’re losing out to Pinduoduo, in more expensive categories they face competition from JD which is providing better service, and they are losing traffic to Douyin,” said Steven Zhu of Pacific Epoch.

“These are all material challenges that Alibaba is facing, but they do have the richest product offerings and the most users,” said Mr Zhu.

Growth at Alibaba’s core ecommerce business in China, which accounts for about half of its revenues, remained subdued as rivals at home and abroad have reported an uptick in sales from a coronavirus-induced shift to online shopping.

Revenue from the adverts that merchants buy to make their products more visible rose 23 per cent year on year, while commissions on sales rose just 17 per cent. The company said it had sold more low-cost goods with lower commission rates and had waived annual fees for merchants.

David Dai of Bernstein Research said Alibaba’s commission growth had been disappointing for the past four quarters, noting that while the company had a good explanation for each period, some investors worried growing competition was also a factor. 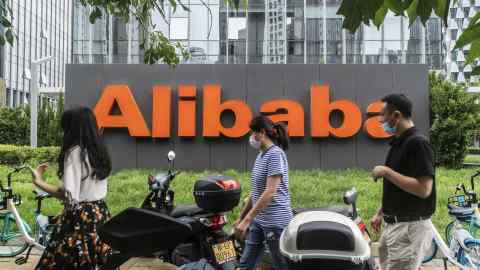 In the US, the tech giant is increasingly on the radar of the Trump administration as it targets Chinese companies ahead of the election in November. President Donald Trump signalled that he was considering taking action against the company, while Mike Pompeo, secretary of state, mentioned its cloud business as a possible target of a “clean network” initiative.

Still, other officials such as Wilbur Ross, commerce secretary, said this week that there was no ongoing “formal proceeding” against Alibaba.

Mr Zhang said Alibaba’s main focus in the US was to help small business and farmers export goods to Chinese consumers. The company’s cloud business also has two data centres in the country and the US is an important market for AliExpress, its global ecommerce business.

Alibaba reported net attributable income of Rmb47.6bn, up 124 per cent year on year as its investment positions in publicly traded equities, which had crashed in the first quarter, rebounded. On a non-GAAP basis, its net income rose 28 per cent.

Alibaba’s US-listed shares fell more than 2 per cent in early trading on Thursday.