Australia’s biggest listed winemaker will diversify away from China as it said Beijing’s move to slap tariffs on imports from the country threatens almost a third of its earnings.

Treasury Wine Estates said on Monday that Chinese demand for its luxury brands, such as Penfolds, would be “extremely limited” because of duties worth 169 per cent applied to its products from Saturday.

TWE said it would reallocate its exports of the Penfolds Bin and Icon ranges from China — which represent a quarter of the brand’s global volume — to markets including the US, Europe, Australia and elsewhere in Asia.

The Melbourne-based group said it would also cut costs and production, as well as source more of the wine it sells in China from its vineyards in France, to avoid trade sanctions linked to tensions between Beijing and Canberra. The company could also potentially sell more of the wine it makes in China.

TWE said the strategy would begin immediately but take two to three years to fully implement.

A strategy of hope is not a very smart strategy

Shares in TWE fell by almost 10 per cent on Monday, adding to an 11 per cent drop on Friday, the day the tariffs were announced.

Tim Ford, TWE’s chief executive, said the company would continue to engage with China’s ministry of commerce on the matter.

“We are extremely disappointed to find our business, our partners’ businesses and the Australian wine industry in this position,” he said. “We call for strong leadership from governments to find a pathway forward.”

Tariffs worth up to 212 per cent on Australian wine threaten up to A$1.2bn ($890m) in annual exports to China, the nation’s largest overseas market. It has already forced winemakers to delay shipments to China and seek alternative markets.

Industry groups warn the disruption will also cause job losses and hurt an industry that is still recovering from the drought and devastating bushfires that caused many winemakers to abandon their 2020 vintage.

Adam Fleck, an analyst at Morningstar, said the tariffs would hit TWE’s 2021 earnings and warned that the main concern for investors is that company’s trajectory looks very different without the booming Chinese market.

TWE said it has A$1.5bn of liquidity on hand and was not at any immediate risk of breaching the financial covenants on its debt. 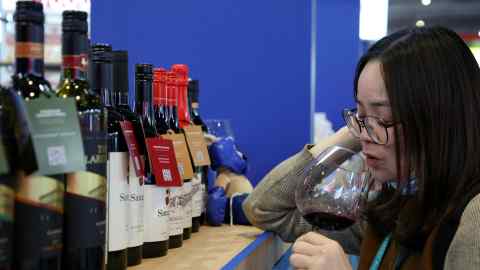 TWE has invested hundreds of millions of dollars in building its brands in China, helping Australia to leapfrog France to become the biggest single wine exporter to the world’s second-biggest economy in recent years. The winemaker has endured a turbulent year following the resignation of previous chief executive Michael Clarke, who repositioned the company to tap into booming Asian demand.

Mr Ford told analysts TWE would accelerate investments in sales and marketing outside of China, as the business could not rely on the possibility of Beijing lifting the tariffs.

“A strategy of hope is not a very smart strategy,” Mr Ford said.