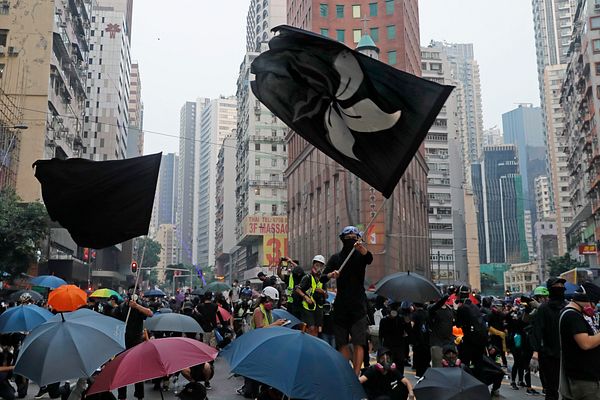 Hong Kong’s autonomy is being killed by a thousand cuts. The latest cut was executed by the Chinese Foreign Ministry, which announced last week its decision to expel over a dozen U.S. reporters and extend this ban to Hong Kong (and Macao). Clearly, the extension of the ban to Hong Kong is a violation of the Sino-British Joint Declaration (SBJD) Annex I Item XIV and the Basic Law (BL) Article 154, which confers upon the Hong Kong government the autonomous power to exercise independent immigration control.

When responding to the incident, the U.S. Congressional-Executive Commission on China Chairman, Representative Jim McGovern, remarked that he hopes “the government of Hong Kong will push back strongly on this gross infringement on its autonomy.” McGovern will probably be disappointed if he is placing his hope on the capacity of the Hong Kong government to defend its own autonomous power.

A research report recently released by Network DIPLO, a citizen diplomacy incubator, found that in 2019 the Hong Kong government made a total of 44 decisions not consistent with the SBJD and the BL. That includes seven cases where the Immigration Department had followed the official line of China by banning critics from entering Hong Kong, such as dissident Wang Xizhe, Falun Gong members, and former Philippine Foreign Minister Albert Del Rosario. Instead of pushing back against interventions, the Hong Kong government has proved to be more inclined to follow the instruction of its masters in Beijing, and undermining its own autonomy.

The failure of the Hong Kong government to uphold its autonomy should have disappointed and puzzled the West. After all, in the first decade of the post-handover period under the Tung Chee-hwa and Donald Tsang administrations, the civil service-led, non-popularly-elected Hong Kong government had largely adhered to the principle of rule of law. For a time, the West was convinced that Hong Kong would be able to sustain its autonomy as in the British colonial past, despite its sluggish democratization.

Such a system of “autonomy without democracy” is built on sand, though. In the old days when China restrained from overly intervening Hong Kong’s autonomy, the local government still had the room to muddle through. But since 2012, under the leadership of Xi Jinping, China has dared to directly intervene in Hong Kong, and the Hong Kong government has quickly degenerated into a “puppet government.” There may be Hong Kong government officials still trying to resist China’s intervention, but they are basically powerless to stop the trend. An illustrative example was when Yau Tsim Mong District Officer Dorothy Ma went on sick leave in October 2019. She was replaced by Laura Liang Aron, who moved quickly to bar democracy activist Joshua Wong from standing in the District Council election.

Hong Kongers and the West need to rethink the pillars that should be put in place to support the autonomy of Hong Kong. Instead of putting hope in Hong Kong government officials to push back against interventions or begging China to exercise self-restraint, stronger checks-and-balances by way of local civil society mobilization and international oversight are necessary to resist further political backsliding. Hong Kong’s civil society has already answered this call through the unprecedented Water Revolution since June 2019; it is now the time for the West to respond as well. The United States is about to conduct its first annual certification under the Hong Kong Human Rights and Democracy Act. Whether the act will be a “toothless tiger” or a “game-changer” depends on the judgment of U.S. Secretary of State Mike Pompeo about the role of Hong Kong on the U.S.-China geopolitical chessboard.

Apart from local civil society mobilization and international oversight, universal suffrage should be brought back into the agenda. After all, Hong Kong’s autonomy, and its fundamental value as a geopolitical neutral ground between China and the West, can only be institutionally sustained through democratic self-government. Ideally, a popularly-elected chief executive will be in a much stronger position to balance the interests of Hong Kong, China, and the West, while a fully-democratized Legislative Council will also be a stronger check on any erosion of autonomy.

Without doubt, China will say no to Hong Kong’s full democratization and will respond strongly to local civil society mobilization and international oversight. More resistance and fights are certainly ahead, but the realpolitik is that Hong Kong’s autonomy and democracy will only come through such a struggle.

For decades, China has adopted a “take-all approach,” trying to make use of Hong Kong’s international financial center for its own purposes on the one hand while imposing tighter political controls over the territory on the other hand. Therefore, the window for change will only come when China finds it difficult to push ahead its “take-all approach.” To reach this point, the local civil society and the West must join hands to push China to accept that full democratization is the only option should it want to keep Hong Kong’s international financial center useful for its own regime survival.

It will be an uphill battle, as always.

This article is part of the HongKongBrief, a monthly e-newsletter on the state of Hong Kong’s autonomy. You can subscribe here.

Oahu may be the absolute most time period within you re to allowed to blow your loan lower.