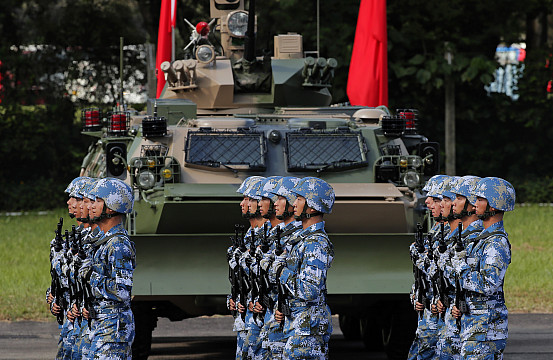 As the Union Jack was lowered and the Chinese flag was raised in Hong Kong on July 1, 1997, marking the handover of sovereignty over Hong Kong from British to Chinese control, another handover was taking place, as well.

The British garrison force in Hong Kong, which had been stationed in what was then its colony beginning in the 1840s, was replaced by white-gloved Chinese People’s Liberation Army (PLA) troops, which rolled into the city by the truckful that day.

Today, the Hong Kong garrison’s combat-readiness is underpinned by units from three distinct PLA Army branches, including ground forces, and smaller contingents of Navy and Air Force units. The combined force is estimated to be anywhere between 5,000 and 10,000 strong.

Housed in former British bases and barracks, the Chinese troops are tasked with air and sea surveillance for threats to Hong Kong and the mainland, countering espionage, and the basic task of defense of the territory, now known as a “special administrative region.”

But as reported by the South China Morning Post, the force is far more than a symbol of China’s sovereign role in Hong Kong.

Indeed, the PLA Hong Kong Garrison force has made a point to publicize its battle-ready capabilities. Just prior to the 20th anniversary of Hong Kong’s handover back to China in 1997, PLA Southern Theater Commander Yuan Yubai and political commissar Wei Liang wrote in the Communist Party’s journal, Qiushi, that “The PLA’s garrison in Hong Kong is not only a military garrison; more importantly, it is a political garrison.” The garrison reports to both the Southern Theater Command as well as to the Central Military Commission.

The article stressed that the garrison should “adhere to the decisions and orders of the central leadership of the party,” and that it is has “changed from image building to combat capability development.”

As the world contemplates whether Beijing will cross the Rubicon and use military force to quell protests in Hong Kong, one question naturally comes to mind: Would the existing garrison be used, or would tanks and soldiers, recently seen moving toward the border in nearby Shenzhen, come across from the mainland? Would they conceivably act as a combined force?

These are more than rhetorical questions. If the forces of the garrison were to be used, how could those troops ever co-exist again with the citizens of Hong Kong, assuming peace eventually comes to the streets of Hong Kong?

On the other hand, if troops and armored vehicles are brought across the psychologically significant mainland-Hong Kong border, how do Hong Kong citizens ever co-exist with the government in Beijing again? The last 22 years since China regained sovereignty over Hong Kong have already been fraught with friction, distrust on both sides, and open animosity between the people of Hong Kong and their mainland visitors. Now that hundreds of thousands to millions of Hong Kong citizens have expressed their open opposition to China’s ruling Communist Party, with that Party now having threatened the people of Hong Kong with the use of military force, how can Beijing’s goal of “deepening patriotism” to the People’s Republic ever be advanced in Hong Kong?

“Crossing the Rubicon” is in this case an apt analogy. When Julius Caesar in 49 B.C. took his troops across the Rubicon, a stream separating Gaul, of which he was then governor, from Roman-controlled Italian lands, he took an irrevocable step. Having been expressly forbidden by the Roman Senate to bring his army to Rome, his flagrant act sparked a civil war.

In Hong Kong’s case, the Basic Law defines the roles, rights, and responsibilities of all parties concerned in the government and administration of Hong Kong for 50 years from the handover date. One aspect of Its edict is clear: the garrison is not to interfere in Hong Kong’s “local affairs,” although the Hong Kong government can ask them to deploy in order to “maintain local order.”

The Hong Kong government is increasingly seen by its constituents as a puppet of Beijing; much of the ire, angst, and rage expressed in this summer’s protests has been directed at exactly that point.

Therefore, as a point of law, Beijing cannot use the garrison to intervene in “local” affairs, unless asked by the Hong Kong government. It is not a stretch to imagine Beijing asking Hong Kong to initiate exactly such a process.

But the Basic Law goes further. It also contains language that can be seen as contradictory to the fundamental premise of separating Hong Kong’s local affairs from Beijing’s whims. The Basic Law states that the garrison forces can be used if a “state of war” or an “emergency” exists.

Who defines the “emergency”? Beijing, of course, in the form of its National People’s Congress, which votes in lock-step with the wishes of the senior leadership of the Communist Party. Thus, the decision of whether or not to use PLA forces from within or outside of Hong Kong is functionally in the hands of one man: Xi Jinping.

As a final thought, it might give PLA commanders pause for consideration that possibly the last time troops were seen building up in Shenzhen was in December 1941. Those troops, however, were Japanese, and they were poised to enter, take, and break Hong Kong.

On that “day of infamy,” they accomplished their mission. One lesson to be had from their short-lived success: Trust and goodwill between the affected peoples, particularly those of Chinese and Japanese descent, may be said to have still not recovered.

As Julius Caesar and the Japanese Imperial Army both found out, sending an army across the Rubicon rarely ends well in the long run.