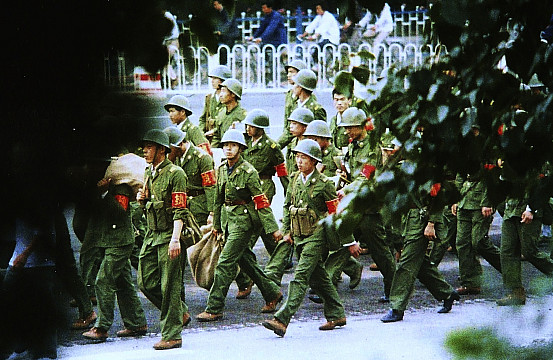 The great divide between Beijing’s 9 million Chinese residents and the infinitesimally small foreign population of less than 1,000 became starkly evident as the city sunk into the long, siege-like period of martial law which followed the massacre of June 4,1989.

I was a member of the tiny foreign population that lived under martial law in Beijing during that second half of 1989. There were no more than a few hundred of us, and some nationalities and regions were represented more than others. The majority of foreigners left in Beijing were from countries that had not gone to the expense of evacuating their embassy staffs. By definition, therefore, there were very few foreign residents left from the richer countries, such as the United Kingdom, most of Western Europe, the United States, or Australia.

I soon realized that there were stark differences between my experience of martial law and what Chinese friends and colleagues were forced to face. It was hard to compare notes, however. I, and most of my foreign friends, had little to no contact with Chinese friends and acquaintances in Beijing. To have made a phone call (to those who even had phones — less than one in 100 did), or worse, to have made a personal visit to a friend’s home, would likely have been catastrophic for the Chinese friend.

A close friend was a grandson by marriage of one of China’s 10 grand marshals. His wife’s family sat at the pinnacle of Chinese political power, prestige, and revolutionary pedigree. Even he, however, made it clear in a brief and nervous visit that he and his family could not see or talk with me until the crisis was over; that it was simply too dangerous for them.

One of the most defining features of pre-Tiananmen life in Beijing as a non-Chinese had been the constant attention from local residents that most foreigners received each time we stepped into public. Chinese were not accustomed to seeing people who did not look like them on the streets of their city, and most were not too shy to openly express their surprise and curiosity. It could feel at times like harassment, but it was not born out of ill will. We were always stared at. We were often touched, rubbed, and asked about our strange features. Those who had cameras usually wanted a photo together with their new foreign “friend,” even if that friendship was just a minute old.

In the post-Tiananmen Beijing administered under martial law, this behavior completely stopped. Walking around central Beijing during those first few months after the massacre, I felt invisible. Local residents not only didn’t stare at me or my friends, they seemed not to see us at all.

This astonishing change of behavior underscored the party line being spouted through China’s state-run media: Foreigners had fomented revolution in China, and had plotted to overthrow the government. It had been necessary, therefore, to root out the traitors who were working on behalf of foreign interests. The PLA was sent in to defend the people from the foreign forces and their local collaborators who had tried to destroy China.

People on whom I desperately wanted to check were off-limits. One was my older teacher from the Foreign Affairs College, and her husband, who had studied at Duke University in North Carolina in the 1940s and 1950s (and who, as a Chinese, had been forced to leave the United States when the Korean War broke out). My teacher had often sneaked me into their apartment on campus. Sitting on the bookcase in my foyer today is a cigar box full of the Mao and other “revolutionary” buttons she had been forced to wear during the Cultural Revolution. Handing them to me in 1988, she had told me that she “never wanted to see them again.”

Contacting this venerable couple would have implicated them in the eyes of the government in a foreign subversive plot to take down the Communist Party.

I also wanted to know the fate of my students. Although not in China to teach, I had volunteered one afternoon a week to help a class of bright computer science students improve their English. Two of my students and I had twice gone together to the demonstrations in the Square. Although I knew where each lived (part of their assignments had been to describe, in English, how to get from our classroom to their homes), again, the consequences for them of a visit from their American foreign teacher would have been devastating.

Two students in my class died on June 4, but I didn’t learn of that until the following year. I leave their stories untold for now, as I know that their families are still in China.

I went back to work for the Australian embassy, and occasionally for the New Zealand embassy, as well. Biking up to San Li Tun most mornings, I came out of the northeast gate of my apartment compound and rode right past the residence of the U.S. ambassador. Black sedans with dark tinted windows were perpetually parked outside the residence for the entire period of martial law and for nearly six months afterward.

The Chinese astrophysicist Fang Lizhi was inside. Internationally-known and respected for both his academic work as well as for his political activism, he and his wife had been constant and very public thorns in the side of the Communist Party since the 1950s. Over the years, they had both gone through periods of favor and expulsion from the party. They had slipped into the U.S. embassy on June 5 and were given immediate asylum. Dr. Fang was on China’s most-wanted list, although he did not directly demonstrate in Tiananmen. I bade him silent good wishes each morning and evening on my way to and from work.

Beijing was under curfew. There had been few nightspots for foreigners prior to June 4, and most of those were forced to close in the Western-branded hotels that housed them, not reopening until many weeks later. Instead, we bonded in one another’s homes, traveling at night between them despite the curfew that forbade it.

We could be stopped and searched at any time. Tanks took up residence on the roundabouts at the main intersections of Second Ring Road and beyond, and on the Jianguomen Bridge on Chang’An, which crosses over Second Ring Road in front of the diplomatic compound.

One afternoon, I was traveling by car with three friends along Chang’An Avenue to the Jianguo Hotel, Beijing’s first joint venture hotel. We could have walked, but thought that would have invited more attention from security than driving.

As we entered the Jianguomen Bridge from the west, uniformed soldiers stepped out from the side of their tank and motioned for us to stop. This was not uncommon, and we got our passports ready for inspection, per a protocol that we had all experienced many times before.

Three soldiers surrounded our vehicle, looked at the passports of my three friends, and then suddenly opened my back seat door and yelled at me to get out of the car, pulling me out as they did so. Two of my friends started to get out of the car to help me; they were pushed back and kept inside by soldiers who stood guard at each car door.

One soldier came in close and trained his AK-47 inches from my stomach, moving me a short distance away from the vehicle, toward the railing of the bridge overlooking Second Ring Road.

“Huzhao,” he said, “passport.” I already had it in my hand. He lowered his rifle and took the passport from me, perusing it slowly and deliberately, stopping on some pages where visas, and exit and entry stamps, had been placed. He saw the Chinese visa, my recent visa to the Soviet Union, a stamped entry into East Germany, and trips to West Germany, the Netherlands, the U.K., and Hong Kong. Having thoroughly inspected the document, he handed my passport back to me and nodded. He motioned me back to the car and we left.

We knew that the young PLA troops were green, and probably more scared of us than we were of them. The vast majority were from the rural, provincial areas of China. They only knew what they had been taught, and that was that foreign influences had tried to overthrow their country. I don’t blame the young man who aimed an AK-47 at my mid-section. The responsibility lies with the political party that lied to him about why he was there in the first place.