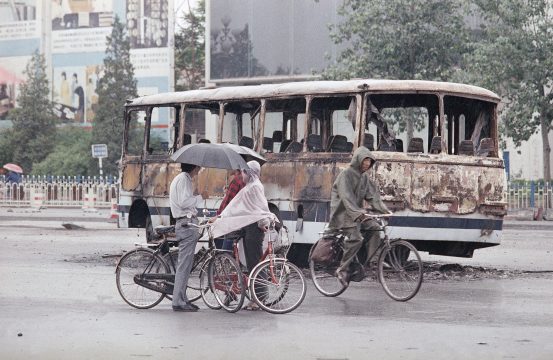 Martial law in Beijing in the second half of 1989 after the Tiananmen Square massacre created a virtual moratorium on contact with Chinese friends and colleagues. The safest option was to leave them alone, and let them take the initiative to contact us. Therefore, a life which was already largely centered on the foreign community became a life nearly cloistered with it. I did not hear from Chinese friends, colleagues, any of my former Chinese students, or any of my teachers at the Foreign Affairs College for more than six months.

Life was punctured by odd occurrences. A famous journalist claimed that she had been “grazed by a bullet” which killed the person next to her during the shootings in the square. Sitting across from her at dinner at the Palace Hotel nine days later, however, I and others observed, thanks to the spaghetti-strap tank top she wore, that no bandage, mark, scar, or contact burn was anywhere visible. Had she healed quickly, we wondered?

Over at the Australian Embassy, we had a visitor. He slipped in on June 4; he was gone some months later. He lived above our ground floor offices; staff walked by with trays of food, headed for the stairs to the second floor. The gates to the Embassy (later the European Union’s diplomatic home in China) remained closed and locked during our mysterious tenant’s tenure.

One day, walking to work from my new digs at a nearby local hotel, I saw from a distance that the gates to the embassy were open. He was gone. Hou Dejian, the controversial Taiwanese singer-songwriter who had supported the students on one hand, and who seemed later to take the Chinese government’s position on the other, had left the embassy overnight.

Yet for me the greatest revelation of the immediate post-Tiananmen era came in January 1990. My friend Li, mentioned earlier as the grandson by marriage of one of China’s ten grand marshals, phoned to ask me to dinner at his mother-in-law’s home the following evening.

Speaking as if no period of incommunicado had existed between us in the intervening months of the just-lifted martial law, Li said that his mother-in-law had specifically asked to see me.

This was an astonishing invitation. To be invited to the home of a Chinese friend was rare, and risky for any Chinese. Under the tense political climate in Beijing in early 1990, the invitation seemed almost foolhardy.

I had met Li’s mother-in-law a few times; we had been to dinner in various restaurants around Beijing. I was naturally intrigued by her, her story, and her background. She had always been unfailingly gracious to me. Unlike many Chinese in those days, she asked nothing of me. No requests to provide financial sponsorship to a relative seeking a college education in the United States, no requests to write a letter of invitation for a visa to the United States.

She lived with her husband in a nondescript apartment block in the Muxidi western area of Beijing’s primary avenue, Chang’An Jie, which runs east and west through the heart of Beijing; its epicenter is Tiananmen Square on the south side, and the entrance to the Forbidden City on the north.

The building’s unexceptional exterior belied the importance of its occupants. Housing no one lower than the rank of Vice-Minister or its equivalent in military and political terms, the only hint to the status of its tenants was a solitary military guard at its main gate. Otherwise, the building looked like a public housing project in any large international city, and still does.

I had been told which door to enter, and the floor number. I knew that someone would be waiting for me and so it was necessary to be precisely on time. I was. In mid-January at 6:00 in the evening it was already dark outside and the hallways were poorly lit with naked low-wattage bulbs. I missed a turn and had to backtrack from one hallway to another once I reached the right floor. I was making my way back to the elevator where I had made my wrong turn when I heard a heavy metal door open and a pair of footsteps come lightly toward me.

Coming along the inner hallway, which ran along the front windows of the building and the outdoor balcony beyond them, was my hostess. She had come out personally to greet me. She embraced me gently, another rarity in China, and took my hand to guide me back along the corridor that faces the avenue that the tanks had rolled down seven months before. Suddenly she gripped my wrist and stopped. As I started to ask what was wrong, she put her finger to her lips in the universal sign that says, “Don’t speak.”  She put one hand on my elbow and another on my back and turned me so that I was looking out of the window, which overlooked the balcony and the street many stories below us. She pointed.

This diminutive woman, who from birth stood at the nexus of both the Communist Party revolution as well as the Red Army that had ushered it in, showed me in quiet fury what she had asked me to come and see. In the dim light behind us and the street light that filtered in from in front of us, she pointed to each blemish in the windows, one by one by one, deliberately, looking at me with intent to ensure that I understood what I was seeing. I returned her looks, locking eyes with her to show that I saw them, that I understood what they were, that I registered the meaning behind their existence as well as the significance of their preservation.

The windows along the corridor were full of bullet holes. The punctures were circled by sunbeam rays of cracked glass emanating outwards from each puncture point.  Meticulously, each bullet hole and each spray of cracked glass had been frozen in time and place by two thicker pieces of glass cut especially for the purpose, one installed on each side of the windows.

Preserved in those windows by the top echelon of the People’s Liberation Army and the Communist Party of China itself, for all to remember, was nothing less than the story of the opening volleys of a civil war, a coup d’etat, or both.

A key figure of unassailable pedigree in the world of the Old Red Army families – lao hongjun – of the People’s Republic of China wanted a foreigner she could trust to see it, and understand it. And I am sure that, someday, she wanted me to report it.

Thirty years later, the full story of that night and all that it means for China is still not known by most Chinese, much less the rest of the world. Yet its importance has magnified with each passing year, and is commemorated outside of China in extraordinary numbers. Student demonstrators and China’s core establishment were both targeted on June 4, 1989. It remains to be seen whether justice for one, and a reckoning of the other, will ever take place.