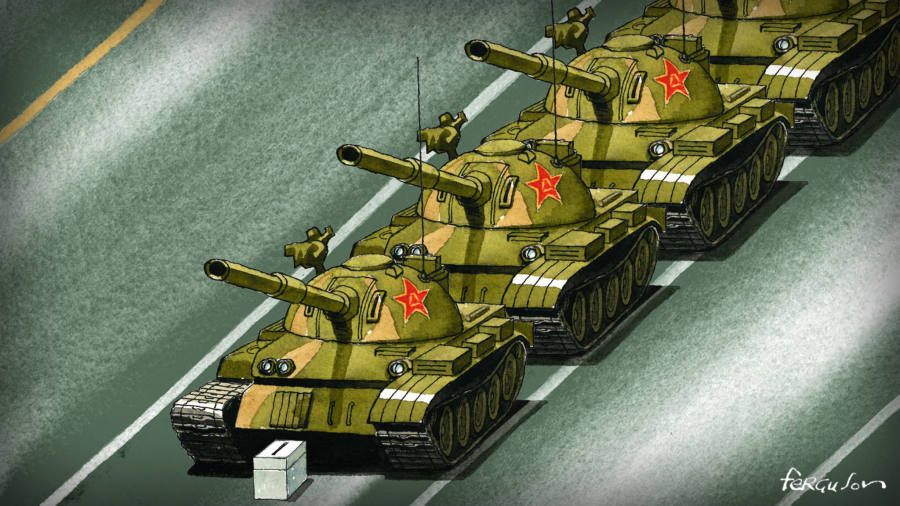 In the US and Europe, the year 1989 is synonymous with the fall of the Berlin Wall. But there were two 1989s. Five months before the wall came down, the Chinese military entered Tiananmen Square and crushed the pro-democracy movement. The 30th anniversary of that bloody event falls this week.

Watching from the west at the time, the dramatic events in Berlin seemed more globally significant than what had happened in Beijing five months earlier. China was just one country, albeit a large one; and it was still poor and under-developed. It was the Soviet Union that had been the second superpower throughout the cold war, and the Soviet empire had just collapsed. The cold war was over. The west had won. Democracy had won. In the great sweep of history, Berlin would surely matter more than Beijing.

Thirty years on, that verdict looks much more doubtful. It now seems possible that future historians will conclude that the most significant event of 1989 was the crushing of the Tiananmen uprising, not the fall of the Berlin Wall. It was Tiananmen that secured the Chinese Communist party’s grip on power, thus ensuring that the rising power of the 21st century would be an autocracy not a democracy.

Chinese autocracy no longer looks like an anomaly. The global spread of democracy — which seemed irresistible in the 1990s — has gone into reverse. The most recent report of Freedom House, which monitors political freedom around the world, makes grim reading. In February it noted that 2018 had marked “the 13th consecutive year of decline in global freedom”, adding that “the pattern is consistent and ominous. Democracy is in retreat.”

After the fall of the Berlin Wall, western intellectuals were churning out works on the triumph of liberal democracy such as Francis Fukuyama’s famous essay on the “end of history”, first published in the summer of 1989, and later turned into a book. Today, the best-selling political books have titles like On Tyranny and How Democracies Die.

This fear for democracy often has more to do with events in the west itself — in particular the election of Donald Trump — than developments in China. But the change in intellectual mood also represents a tacit acknowledgment that China has achieved what seemed impossible to most western intellectuals back in 1989.

But China has proved that theory wrong. It remained a one-party state. But it has continued to surge economically, becoming the world’s largest economy (measured by purchasing power) in 2014.

This has bolstered the official Chinese interpretation of 1989. The Communist party has always argued that the key to growth and prosperity in China was not democracy but stability. This became the official justification for crushing the Tiananmen uprising. And although this argument is obviously self-interested and amoral, it is not obviously absurd (unlike most Soviet propaganda).

China’s ability to thrive in the information age has been another nasty surprise for western liberal theorists. The rise of the internet strengthened the west’s post-1989 conviction that China’s one-party state was living on borrowed time. If the key to economic progress was now the free flow of information then it seemed that China faced a choice — it either had to open up or stagnate economically.

But events have undermined these confident theories. China has grown steadily richer, but the Chinese political system has become more, not less, autocratic. Meanwhile, a horrible realisation has grown that the internet and social media may not be the tools of political liberation that were envisaged during the Clinton and Obama years. China has successfully built a “great firewall” on the internet, blocking sites such as Google and Facebook. But that has not prevented the rise of successful and innovative Chinese tech giants, such as Alibaba and Tencent — on the contrary, it may have helped them.

Meanwhile China’s ability to monitor its citizens through their online activities and using new tools — such as facial-recognition technology — has conjured up a nightmare of a successful Orwellian state, able to reward or punish its citizens based on internet surveillance and the use of artificial intelligence.

The continuing rise of an autocratic China has prompted a major reversal in western thinking. The west’s embrace of globalisation and trade with China was not merely an economic decision. It also reflected a political judgment that globalisation would serve as a vehicle for western political values. George W Bush summed up this conventional wisdom, when he said before his election as US president in 2000: “Trade freely with China, and time is on our side.”

By launching a trade war on China, Mr Trump is signalling that he is operating on the opposite assumption: “Trade freely with China, and time is on their side.”