Beijing is on alert for flooding as China struggles with a series of severe weather events that are driving up food prices and threatening its economic recovery from coronavirus.

The Beijing municipal government, worried over a repeat of 2012 when flash floods killed about 80 people — some of whom drowned in their cars in underpasses, has shut parks, advised residents to avoid unnecessary travel and cancelled flights from its Daxing airport.

Throughout June and July, southern and central China were hit with days of incessant rain at levels similar to 1998, when flooding killed more than 3,000 people.

As of July 28, this year’s downpours had left 158 people dead or missing, displaced about 3.7m and caused Rmb144bn ($20.8bn) in damages, according to official figures, as well as destroying vast areas of crops.

The floods are threatening the country’s north while a typhoon has caused landfall on the south-east coast.

China’s consumer price index rose 2.7 per cent in July, according to official data released on Monday, with food prices jumping 13 per cent compared with the same period last year. 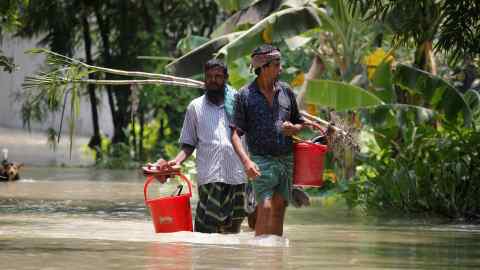 Ting Lu, chief China economist at Nomura, said this week that flooding along the Yangtze river was partly behind the higher inflation, which he said had “severely constrained” production and shipments of agricultural products.

Pork prices have already skyrocketed compared with last year because of the country’s African swine fever epidemic, which has sharply reduced the pig population.

Data from China’s ministry of agriculture showed that an index of the prices of 28 vegetables was at its highest level of any summer in the past five years.

The Communist party has poured billions of dollars into massive infrastructure projects, such as the Three Gorges dam, and claims flood control as one of its achievements.

But this year’s floods have severely tested the government’s network of tens of thousands of dams, levees and dykes along the Yangtze and its tributaries.

To protect urban areas, the authorities were forced to channel record-high water levels into downstream flood diversion areas, some of which had not been used in more than a decade, displacing thousands of farmers and ruining their crops.

Environmentalists warn that rising global temperatures are going to worsen China’s floods. “Recent studies on climate change in China have proved that extreme precipitation events in China have become more frequent and intense over the past few decades,” said Liu Junyan, a Beijing-based campaigner for Greenpeace.

Despite being an arid landlocked city with no natural rivers, Beijing’s concrete sprawl lies in a basin and the city has longstanding problems with its urban drainage system. This makes its streets liable to flash flooding during intense downpours.

Kleio. After date, she will provide BJ, do doggy and missionary.

Even even more Specifics Attached Articles

Extra Investigations Than The answers Relating to Genuine Carafe Within Nevada

Is As well A whole bunch Concern Growing to be Arranged In A good Coronavirus Vaccine?