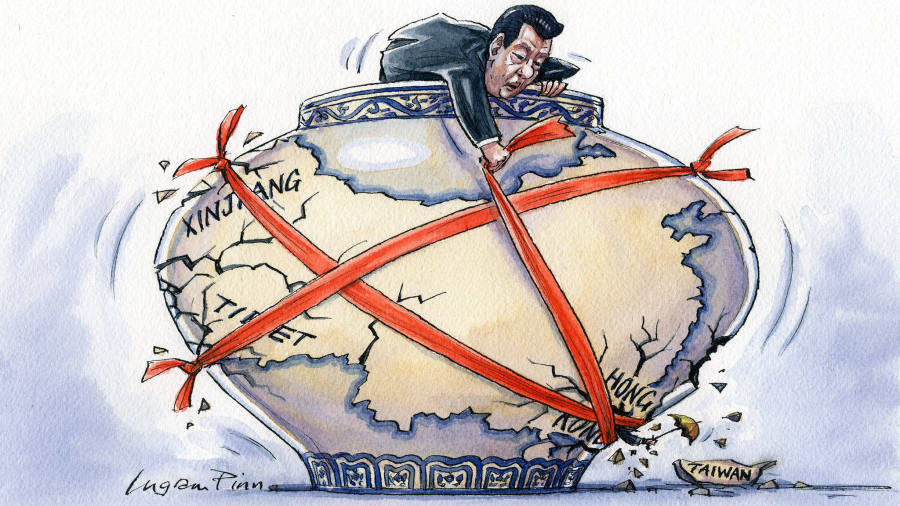 The very first line of Romance of the Three Kingdoms, one of the four great classical novels of Chinese literature, holds a prophecy for anyone seeking to rule China: “The empire, long divided, must unite; long united, must divide. Thus it has ever been.”

Probably the biggest question facing Chinese President Xi Jinping today is whether the empire is in one of its centrifugal or centripetal phases.

Mass protests on the streets of Hong Kong might suggest Beijing’s grip on its peripheral territories is slipping. On Monday, protesters smashed their way into the city’s legislative building, vandalising the halls and desecrating symbols of Chinese rule. In the ultimate gesture of impudence they even hung the old British colonial flag in the inner chamber.

Outside on the streets, hundreds of thousands of peaceful protesters marched through the city to express their anger at Beijing’s interference in their lives.

In recent weeks as many as 2m people at a time, out of a population of 7.4m, have marched in opposition to a law that would allow Beijing to extradite alleged criminals from the territory. Especially as a proportion of population, these are some of the biggest demonstrations in history and they forced the Hong Kong authorities to suspend the legislation indefinitely.

But many of the protesters say they are motivated by a sense of hopelessness and a belief this is the last gasp of free expression in Hong Kong. Judging by Mr Xi’s record they may well be right.

In another corner of the empire, the Communist party has gone to extreme lengths to bind the north-west border region of Xinjiang to the motherland. According to estimates from the US State Department, as many as 2m Muslims — around 10 per cent of Xinjiang’s entire population — have been detained in re-education camps, primarily because of their religion.

The Chinese government says this repression, aimed mostly at the ethnic Uighur minority, has helped it stamp out a separatist movement that organised sporadic knife and vehicular attacks across the country in recent years.

In Tibet, to the south of Xinjiang, the population has lived for many years under virtual military occupation.

It is not hard to imagine Mr Xi losing patience with Hong Kong and ordering a premature end to the “one country, two systems” framework that allows the only example of open dissent on Chinese soil to continue.

“Although it is painful to cut out the abscess, it is better than nourishing evil” is another famous quote from the Romance of the Three Kingdoms.

Even if Mr Xi does not decisively crush the unrest, he will almost certainly ramp up political pressure to bring Hong Kong into line. The demonstration effect for the rest of the People’s Republic is just too risky if Beijing is seen as too soft on the former British colony. If people in Hong Kong can get away with defying the emperor then why wouldn’t people in Shanghai or Shenzhen or Beijing give it a try?

Since the moment he took power in 2012, Mr Xi has identified the “great rejuvenation of the Chinese nation” as his overarching goal. If his vision is to be realised then one crucial element is missing: the independent island nation of Taiwan. Hong Kong used to be held up by Beijing as a possible model for democratic Taiwan. But nobody has seriously mentioned that idea for nearly a decade.

Mr Xi appears increasingly to favour some kind of military solution to his Taiwan question. A senior official in Taipei told me recently that Beijing now assesses the military and political cost of an armed invasion on “a daily basis”.

The main thing holding it back is the possibility of failure, especially if the US intervenes as it has promised to do in the event of an invasion. As Mr Xi knows from Chinese history, the fastest way to end a dynasty is to lose a war, especially one you started.

It has probably been more than two centuries since China looked as strong as it does today, at least from the outside, and the empire’s centripetal forces appear to be ascendant. But control of the periphery has only been achieved through harsh and extreme measures that alienate the subjects they are meant to control. Beijing’s ability to attract others with its soft power is almost completely lacking, even for many living within its current borders, let alone for people in neighbouring countries who look at China’s rise with growing trepidation.

The problem with the current policy of repression is that when China does eventually undergo political liberalisation — something I believe is not imminent but still likely in the coming decades — these territories will do their best to break away from the rest of the country. The Soviet Union provides an instructive example of what happens when the iron grip loosens.

This push for disintegration will happen despite the fact that Tibet, Xinjiang, Taiwan and Hong Kong would probably be better off economically and politically within the borders of a reformed, perhaps federally administered, China.

Because of the actions of the Chinese government today, the Celestial Empire’s cycle of reunion and dissolution will continue long into the future.

Global investors in limbo after Ant IPO torpedoed by Beijing