Recently, I and a colleague at the Education University completed a study on upward mobility of Hong Kong’s young people of different cohorts across three decades. The results indicate that among those born in 1991-95, only 12 percent were absolutely poor in the sense of earning an income less than HK$10,000 ($1,280) a month at 2018 prices. This compares with 36.3 percent for those born in 1986-90, a big improvement over those born just five years ago. For those who were born in 1986-90, life indeed looked a lot grimmer than those born in 1981-85 when they started their careers, say, at 21 to 25. But by the time they reached 26 to 30, the “absolutely poor” percentage fell to 5.3 percent, which is actually much better than those born five years ago. Moreover, no cohort before them had ever had such a low absolutely poor rate at 26 to 30.

One may think that those born much earlier, say, in the 1960s, would enjoy faster upward mobility. But as a matter of fact, those born in 1961-65 started with an 80 percent absolutely poor rate, and that fell to only 28.5 percent by the time they reached 26 to 30. This is a dramatic improvement, but that is still much higher than the percentage of all other later cohorts at the same age. 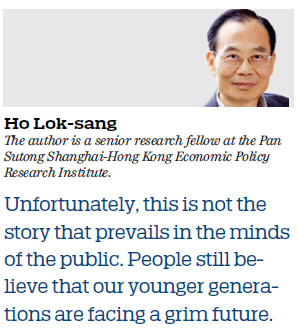 We do not have data about how those born in 1991-95 fare by the time they reached 26-30 because our research is based on census data. The latest by-census was conducted in 2016, when this group would have been only 21 to 25. But this latest cohort is actually financially far better off than any of the previous cohorts when they were at 21 to 25.

Data show that for those born in 1986-90, upward mobility has jumped, compared to those born just five years earlier. Whereas only 4.1 percent had monthly income HK$25,000 or higher at the beginning of their career, by age 26-30, 35.5 percent enjoyed such incomes. This is higher than that for any of the previous cohorts at the same age, suggesting faster upward mobility.

These results are drastically different from what is commonly perceived.

I believe that this has to do with the “postwar baby-boom” effect. Postwar baby boomers, defined as those born in 1946-55, became 60 to 71 in 2016, and these baby boomers retire in larger numbers than five years ago. Because the number of baby boomers is huge, the number of retiring workers is also huge, offering promotion prospects to others still at work. Since the promotion of senior staff also opens up promotion opportunities for more junior staff, the number of young people getting relatively senior positions at an early age has gone up.

Unfortunately, this is not the story that prevails in the minds of the public. People still believe that our younger generations are facing a grim future.

Sadly, what is happening in recent months may actually be turning fictions into facts. With Hong Kong’s business climate suddenly turning unfavorable, job prospects for this year’s graduates will indeed be grim, and things probably will not improve unless the current turmoil calms down quickly. Even if that happens, Hong Kong will take time to heal, and employers have to take time to restore confidence in the ethics of our graduates at least for a number of years.

Sadly, many young people wrongly believe that more democracy and being an American ally will automatically bring them a brighter future. They need to look at Chile, which is described by Wikipedia as “a representative democratic republic, whereby the president of Chile is both head of state and head of government, and of a formal multiparty system. The judiciary is independent of the executive and the legislature of Chile.” It sounds great, doesn’t it? Even more attractive for the Hong Kong protesters: “Regarded as one of the least corrupt and most vibrant democracies in South America, with a healthy economy, Chile is noted as being one of the closest strategic allies of the United States in the Southern Hemisphere.” Yet the recent protests and riots in Chile are no less violent than those in Hong Kong, and the brutality of the police and that of the military is definitely far worse. The headline of a recent posting in The Guardian reads: “Hundreds shot and beaten as Chile takes to the streets” (Oct 27). It “left at least 19 dead nationwide.” Military enforced curfew was ordered.

Chile has worse income disparity than Hong Kong, does not have a minimum wage, and its rule of law index ranking is 25, as compared with Hong Kong’s 16. That of the US, by the way, is 20. Hong Kong is not a paradise, but this is not the reason to destroy what we have. Emulating Chile or the US does not appear to be good for Hong Kong at all.