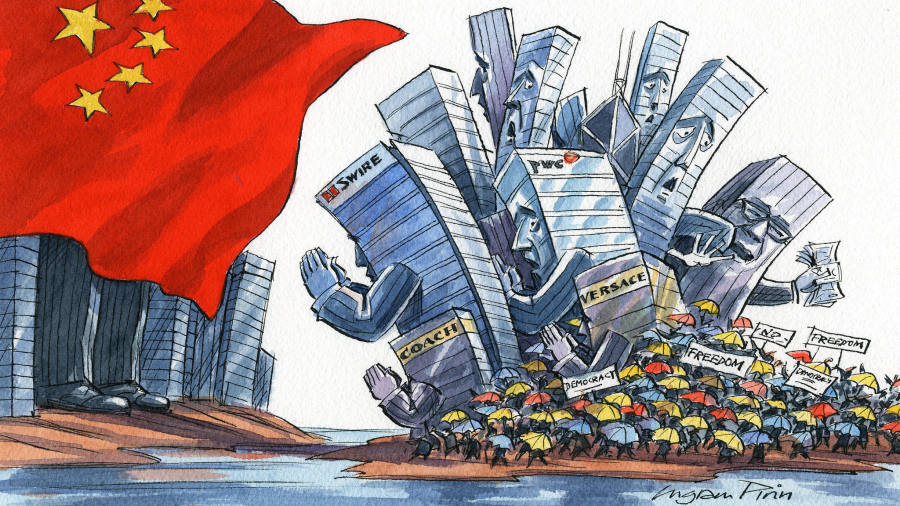 Li Ka-shing, the 91-year-old Hong Kong tycoon, is a veteran of communicating with symbols and allusions. So when his property company CK Asset Holdings acquires Greene King, the largest listed UK pub company, for £4.6bn, we should take note.

The deal followed weekend protests by an estimated 1.7m people in Hong Kong against China’s grip on the former UK colony. Mr Li, who has been excoriated in the People’s Daily for diversifying out of property in mainland China and Hong Kong into economies including the UK, is clearly unbowed.

The same cannot be said of Swire, the trading company established in Hong Kong by a Liverpool textile firm in 1870. Chinese pressure on Cathay Pacific, the airline it controls, over the role of employees in protests, last week forced the replacement of Rupert Hogg, Cathay’s chief executive.

Neither does it apply to auditors such as PwC, whose Hong Kong partners issued a contrite statement after Chinese outrage at employees of large accounting firms publicly backing the protests. Nor to the luxury companies Coach and Versace, which had to apologise for suggesting that Hong Kong is a country, and not a part of China.

“I aim to be strong enough to be respected, if not beloved,” declared John Samuel Swire, who brought his family’s firm to Shanghai and Hong Kong in the 19th century. But China’s use of multinationals to enforce party discipline on rebellious Hong Kongers is in danger of making them neither.

Companies such as Cathay Pacific, 70 per cent of whose flights overfly the mainland, feel unable to resist China’s intolerance of any challenge to sovereignty. But it is humiliating — one point of the open obeisance that China requires — and will hurt elsewhere.

The protests, which started in opposition to an ill-judged extradition law and have become a wider call for greater democracy and civil rights, are a turning point for businesses. Hong Kong’s “one country, two systems” offered both freedom and access to China; in future, they may have to choose.

“It is a very dangerous precedent, and shareholders may ask why they are kowtowing to Beijing,” says Willy Lam, a scholar at the Chinese University of Hong Kong. It is hard to proclaim a social conscience in one place and fail to stand up for staff in another.

China and its state media have made little effort to distinguish between violence and peaceful protest. The Global Times, an offshoot of the People’s Daily, last week relayed calls for the big four Hong Kong auditors to “fire employees found to have the wrong stance”. Deloitte showed some pluck by specifying that “we respect the right of individuals to peacefully express their views”.

Mr Li artfully straddled the line by placing advertisements in papers last week, signed “a Hong Kong citizen”. One included a line from a Tang dynasty poem about an empress who killed her children: “The melon of Huangtai cannot bear the picking again.”

That could be taken either as an admonishment against violence, or as a jab at China; the latter interpretation made Mr Li popular among protesters. He can afford ambiguity: having taken control in 1979 of Hutchison, Swire’s old rival, he has hedged his bets. Nearly half of the revenues of CK Hutchison Holdings, another Li family holding company, come from Europe.

It helps to be Chinese; history is an obstacle to defying China for groups such as Swire and HSBC, whose original prospectus promised a Hong Kong bank “run on sound Scottish banking principles”. A UK company that makes trouble is liable to be dismissed as colonialist, although rights such as freedom of assembly are in Hong Kong’s basic law.

China’s government and media are also practised at encouraging outcries on social media against foreign slights, and consumer boycotts. Liu Wen, a Chinese model, resigned as a brand ambassador for Coach last week after it labelled Taiwan and Hong Kong as countries on T-shirts. “I love my motherland and resolutely safeguard China’s sovereignty!” she wrote.

It is fair for companies to condemn violence and call for order and negotiations to settle the dispute. The outbreak of brutality among protesters at Hong Kong’s airport last week damaged the cause and increased the danger of China intervening by sending military police across the border.

But businesses have collective strength. David Webb, a Hong Kong corporate governance activist, says Cathay could have “called China’s bluff” after it threatened to block flights over the mainland. That might have deterred foreign investment in Hong Kong and scared the wealthy Chinese who keep family offices there.

Those with a big stake in Hong Kong’s future need to do more than fall meekly in line with China and become Beijing’s enforcers. John Slosar, Cathay chairman, was right to insist (before Merlin Swire, Swire’s chief executive, was reprimanded by China’s aviation regulator) that the airline “wouldn’t dream of telling [staff] what they have to think”.

Hong Kong was always a balancing act and its equilibrium requires financial and corporate independence, married to China’s market. Its business leaders should learn from Mr Li.