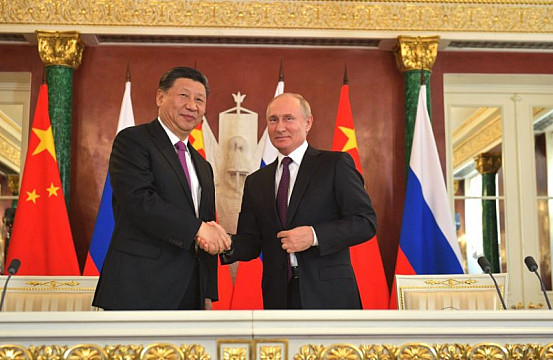 Chinese President Xi Jinping is in Russia this week, marking his eighth visit (and fourth state visit) to China’s northern neighbor since assuming office in 2013. His three-day trip, lasting from June 5 to 7, will include attending the St. Petersburg International Economic Forum, which is due to kick off Thursday. Xi’s trip has been in the works for over seven months, but accumulated increasing importance as the U.S.-China trade war kicked back into high gear after a brief truce.

Amid mounting tensions with the United States, long China’s top single trading partner, Beijing is now especially keen to emphasize the economic side of its relationship with Russia. That helps explain why Xi’s state visit was planned to coincide with Russia’s top international economic event. Chinese media in particular have been talking up China-Russia trade ties, and there are some early signs that relationship is benefitting as China moves away from importing U.S. energy and agricultural products. China-Russia trade grew 27 percent in 2018 and continued that steady growth into 2019, increasing nearly 10 percent year-on-year in the first quarter of this year.

In a written interview with Russian media outlets, Xi held up the growth in China-Russia trade as positive outlier in global trends: “These notable results of our business cooperation are especially valuable given the current complex environment of sluggish global trade and investment and surging protectionism in the world.” He added that both governments “are taking proactive efforts to bring our trade volume to a higher level and promote high-quality development of bilateral trade.”

Yet those rosy figures and optimistic rhetoric mask a more complicated picture. The bulk of last year’s trade growth was concentrated in Russian energy exports, and Chinese investment in Russia actually dropped in 2018.

In 2017, according to the most recent available World Bank data, Russia was China’s tenth largest trading partner, behind not only China’s Asian neighbors like Vietnam, Malaysia, and India, but farther flung trade partners like Brazil and Germany. Overall, Russia accounted for just under 2 percent of China’s total exports in 2017, and just over 2 percent of its total imports (the United States, for comparison, received 19 percent of Chinese exports and supplied 8 percent of China’s imports). Clearly, the economic relationship has a long way to go.

Chinese and Russian leaders recognize this. In 2011 they tried to jumpstart economic ties by setting some ambitious targets: reaching $100 billion in bilateral trade by 2015, and $200 billion by 2020. They seemed on track to meet the first target, topping $90 billion in two-way trade in 2014 – but then trade volumes fell off a proverbial cliff as international sanctions against Russia took hold. Trade plummeted to a mere $64.2 billion in 2015, and wouldn’t climb back up to finally crest the $100 billion mark until last year, when China-Russia trade volumes reached a record high of $107 billion.

Even if trade continues 2018’s remarkable 27 percent year-on-year growth rate for the next two years – a tall order, given how much of that trade is concentrated in the energy sector – it would still fall well short of the $200 billion goal in 2020. That may be why Moscow, at least, seems to have quietly pushed the target date back to 2024.

Instead, there’s a clear focus on geopolitics in China-Russia relations. The words “economy” and “trade” were mentioned only once each in Xi’s remarks to the press alongside Putin on June 5; the Russian president didn’t bother to talk about either. Instead, Putin emphasized that “the positions of Russia and China on key global issues are close or identical.” It was clear that when he praised China-Russia cooperation as being at an “unprecedentedly high” level, Putin was not talking about trade.

Likewise, Xi seemed more interested in praising the political and strategic nature of China-Russia relations, noting, “Both sides strongly support each other and defend each other’s vital interests.” And the stated purpose of Xi’s trip, according to a pre-visit press briefing by Chinese Vice Foreign Minister Zhang Hanhui, was to “consolidate the political foundation of Sino-Russian relations” (emphasis added).

Personal ties between Xi and Putin – and thus between their respective governments – are exceptionally close. Xi had glowing language to describe that relationship in his comments to Russian media: “I have had closer interactions with President Putin than with any other foreign colleagues. He is my best and bosom friend. I cherish dearly our deep friendship.” But alongside that strength comes a tacit admission that the relationship is at its weakest when it comes to economics. Xi put it as diplomatically as possible when he said that China and Russia “need to work closely to seek greater synergy between our development strategies [and] deeper convergence of our development interests.”

Zhang, in the pre-trip briefing, put it a bit differently, saying that China and Russia would be seeking to use Xi’s visit to “translate the advantages in high-level political relations into more tangible results.” It’s clear that despite the obvious bromance between Putin and Xi, those “tangible results” remain frustratingly difficult to realize in the economic sphere.

Let me make it clear about English and Comparative Literary Studies