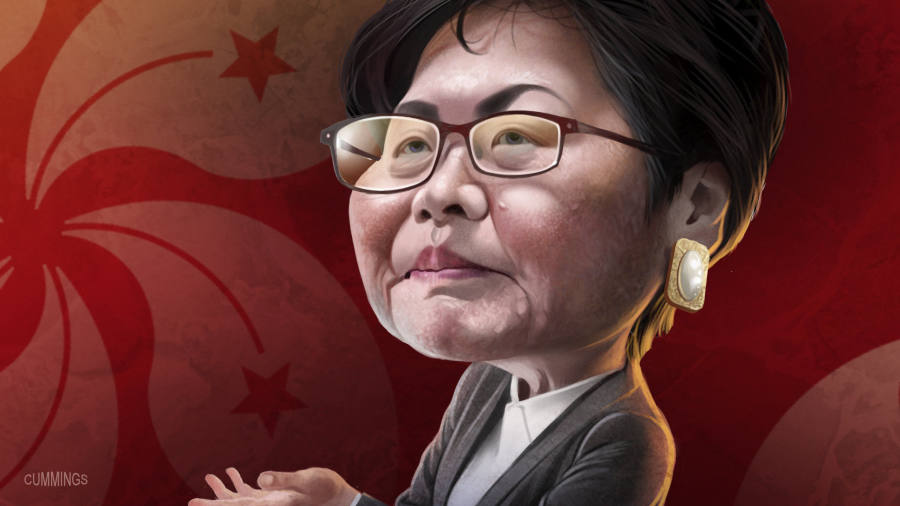 Before Hong Kong’s chief executive blundered into the city’s biggest political crisis since it reverted to Chinese sovereignty 22 years ago — with as many as 2m people marching in the streets last Sunday to demand her resignation — Carrie Lam was on a roll.

Just two years into Ms Lam’s five-year term, the Hong Kong government and courts had expelled pro-democracy lawmakers from the city’s Legislative Council, barred suspected Hong Kong independence supporters from running for seats in the legislature, and imprisoned leaders of a 2014 civil disobedience movement that occupied the central business district in a failed call for genuine democratic elections. Like her three predecessors, Ms Lam, 62, was selected by a 1,200-member “election committee” dominated by pro-Beijing figures.

Hong Kong’s leader is a career civil servant famous for her steeliness and fealty to Chinese president Xi Jinping who has impressed upon her his “absolute zero tolerance of anything related to Hong Kong independence”, says one former senior Hong Kong official.

In 1997, the former British colony became a “special administrative region”, where civil freedoms are protected under a “one country, two systems” arrangement. As Ms Lam put it in an interview with the Financial Times last year: “If we respect the one country, then we preserve our own system.”

In February, however, Ms Lam badly miscalculated when she proposed a legal amendment that would allow, for the first time, anyone passing through the territory to be extradited to China’s Communist party-controlled courts, if wanted for certain offences.

Criticism of the proposed measure was immediate and came from all sectors of Hong Kong society, from pro-independence activists to pro-Beijing businesspeople. Two huge rallies forced Ms Lam to shelve the legislation indefinitely on Saturday. But, still, some 2m people — almost a third of Hong Kong’s population of 7.4m — took to the streets the following day to demand the formal withdrawal of the amendments as well as Ms Lam’s resignation. Again this week, thousands of young protesters besieged government buildings and police headquarters, halting traffic.

The unprecedented backlash dominated headlines around the world and made it clear that the average Hong Konger sees too much deference to the “one country” as a threat to the “two systems” arrangement, which guarantees their civil freedoms.

Ms Lam also seemed oblivious to the fact that the steady squeeze her administration has put on pro-democracy legislators, pro-independence activists and leaders of the Occupy Central movement had generated so much resentment — especially among the city’s youth, who are mostly priced out of its sky-high property market. As Zoe Li, a university student, said after Sunday’s rally: “I don’t want to live in a Hong Kong where the atmosphere is dark. I don’t want to live in a place where there is only one idea or opinion.”

Ms Lam instead interpreted her defeat as an isolated error arising from poor communication with the public. When it finally came, her apology was that of a bureaucrat struggling to cope in the limelight.

“Carrie, like me, has no doubt at all that the amendment is both just and necessary,” says Jasper Tsang, founder of Hong Kong’s largest pro-Beijing political party. “It will not lead to the kind of consequences that many people have been saying there will be. That is why it would be very difficult for her to say in public, ‘It was a mistake, we shouldn’t have started the whole thing’.”

The irony is that Ms Lam was once, herself, the average person on the Hong Kong street. Born in 1957 to a working-class family in Wan Chai, then one of the city’s seedier districts, she worked her way up out of her surroundings through academic excellence — maintaining the air of a star pupil struggling to connect with her peers. People who know her well add that she combines a strong work ethic with a reluctance to delegate.

Ms Lam, who is married with two sons, joined the civil service soon after graduating from the University of Hong Kong, the then colony’s premier university. Her rise through the government’s ranks — becoming development secretary in 2007 and head of the civil service in 2012 — took her further and further away from her origins. Along the way she has enjoyed perks that the alienated youth of today’s Hong Kong can only dream of: a job for life, increasingly luxurious government residences and a gold-plated pension.

It is hard to see how Ms Lam, with her limited interpersonal and political skills, can recover from this month’s setback and finally win the trust of the millions of people who have marched against her. At best she will be able to serve out the rest of her first term as a lame duck; it would be too embarrassing for Mr Xi to lose his handpicked chief executive so soon. But serving a second five-year term would require a Lazarus-like political resurrection for the devout Catholic.

“When Carrie was secretary for development, she was never afraid to confront angry protesters in person,” says Mr Tsang. “This time, because the situation is so fiery, it would not be a wise thing for her to do.”