The Hong Kong government’s further revision of the extradition bill was a genuine response to recent concerns in society, not a case of favoring the business sector, said former justice secretary Elsie Leung Oi-sie.

On Thursday, Secretary for Security John Lee Ka-chiu announced that the threshold for extradition of fugitive offenders would rise from three to seven years in prison. This means only offenders involved in serious criminal offenses could be subject to extradition after the business sector expressed concerns.

Leung said this showed the government had not stopped listening to suggestions since the bill was introduced in February, even though some complained the consultation only lasted 20 days.

“The government is not giving special favors to the business sector,” Leung said. “It is because a great number of people are involved and so the government has done something to ease their worries.”

Leung also noted people opposing the amendment bill question whether the chief executive will resist the surrender of fugitive offenders if they are demanded by the central government. The opposition camp also said local courts can do very little to act as gatekeepers in such circumstances.

“It is also untrue when the opposition camp says the courts are very weak in their role as gatekeepers. Do they also mean the courts will be very weak too in dealing with extradition requests from other jurisdictions?” 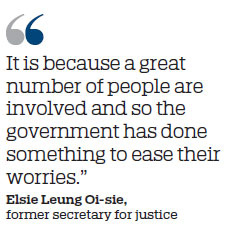 She cited the case of US fugitive Edward Snowden as an example. In 2013, the US requested Hong Kong assist in the arrest of former US National Security Agency contractor who hid in the city at that time. After receiving the request, the Department of Justice sent a list of questions to the US government to clarify the case, Leung noted.

The track record proves that the Hong Kong government always deals with fugitive surrender cases in accordance with the law, Leung said.

She is also aware that consuls general of European Union countries in Hong Kong recently made diplomatic overtures to Chief Executive Carrie Lam Cheng Yuet-ngor. She noted the nation’s Foreign Ministry had responded.

“Even EU countries such as France, Italy, Spain and Portugal have surrendered fugitive offenders to the Chinese mainland, what is wrong with Hong Kong doing the same?”

Leung said she had questioned this, adding: “How can I be sure this is not fake news when all the judges and lawyers were anonymous?”

She agreed with Executive Councilor Ronny Tong Ka-wah who said judges should not speak to the media about sensitive, political matters.