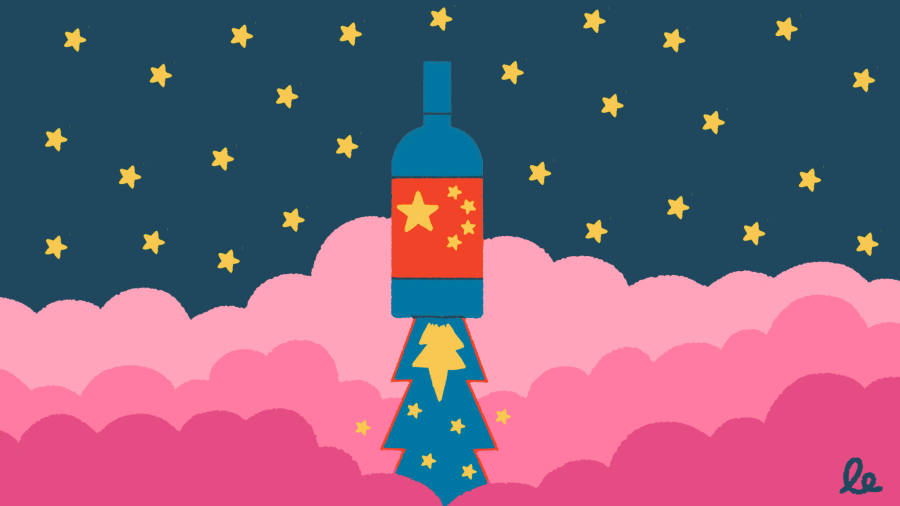 Château Lafite is the most famous of the Bordeaux first growths, so it’s arguably the most famous wine in the world. It is by far the best-known name in China, the fastest-growing, most brand-conscious wine market, where fakes have been commonplace.

So the fact that Lafite is finally launching its own Chinese wine, after 11 years of preparation, is a big deal.

I visited the winery back in February, but was sworn to secrecy. And nothing was more secret than the name of the new wine. None of Lafite’s Bordeaux staff, and not even the team in China who make it, a mix of nationalities but mainly French, knew what it would be called or how it would be labelled — until this week.

To prevent loose lips and skilled counterfeiters, the labels have been printed, under heavy security and many a non-disclosure agreement, in Bordeaux. They are impossible to detach from the bottle, and the foil over the neck is lined with a banknote-quality anti-counterfeit graphic.

The wine was launched on Wednesday with a luxurious lunch for local officials at the Chinese winery. Baron Eric de Rothschild, his daughter Saskia and Jean-Guillaume Prats, president of Domaines Barons de Rothschild, were all planning to fly out specially. After all, this was the culmination of a project that has not been easy.

When the first rumours that Lafite intended to establish a wine estate in Shandong were heard back in 2008, some eyebrows were raised. Shandong, on the east coast, was the initial focus of the modern Chinese wine industry because it is convenient for shipping, and winters are mild enough that vines don’t need to be painstakingly buried every autumn.

But it has the disadvantage of being routinely plagued by monsoons between late July and mid-August, which encourages the vine scourges rot and mildew. Although the climate here is tending to get warmer and drier, midsummer spraying is essential, and the landscape is dotted with flapping silver foil, applied to the ground by locals to ward off excessive moisture.

There were also rumours of challenges in the initial state of the soil on the estate, and the oldest planting was only in 2011. The late Gérard Colin, the original estate director, who was poached from Grace Vineyard — producer of the first fine red wine in China — left to establish another venture in the far west of China.

The first vintage made in any quantity was 2014, but it and the two succeeding vintages have been dispatched to a distillery to become neutral alcohol, ensuring they never reach the marketplace as wine and create confusion with debut vintage 2017.

With a nod to the significance of the number eight in China, the Lafite team (who made much of their 2008 vintage Pauillac) originally wanted to hold the major launch for the Chinese wine trade on August 8 2018 but have had to postpone it to September 19 this year. Numbers are crucial in China.

For a period, Lafite joined up with one of China’s biggest trading companies, CITIC, for this venture, but wine seems to have lost some of its shine for such enterprises and now the Rothschilds are going it alone, albeit with the support of the former mayor of the local village, who left his civic duties to work for Lafite.

The countryside between Yantai and Penglai is extremely hilly and Lafite has taken full advantage of the many different exposures available. There are a few other wineries around and there are likely to be even more now that Lafite has blessed the area, but the Chinese-owned vineyards tend to be on fairly fertile soils on the flat (and their winery buildings tend to be considerably showier). Lafite aims for the thinnest of soils on the local granite base, encompassing 360 terraces on less than 30 hectares of vines.

The key to the project is Juliette Couderc, the 27-year-old French vineyard manager, who has worked in Chile, New Zealand and France and seems to be as beloved by her young team as by the stray hound who follows her everywhere. “It’s much easier to be a woman boss in China than in France,” she assured me. “The Chinese have a real respect for hierarchy.”

Couderc only arrived in 2017 but I was impressed by a few samples of 2018s from varied plots that I was allowed to taste in February.

So what of the all-important 2017 that will hit the market in September at the carefully calculated price of 1,100Rmb (about £127) a bottle to the consumer? (Prats, when working for LVMH, was responsible for the launch of the rival French-owned fancy Chinese red. Ao Yun, from Yunnan in the south of China, was launched in 2017 at an ambitious 2,800Rmb.)

The name first. I have no idea how many possibilities were considered but Long Dai, meaning “chiselled mountain”, is a bit of an anticlimax. But perhaps names don’t really matter. The liquid, and the Lafite connection, are certainly far more important.

Yields in 2017 were only 20 hectolitres per hectare so there are just 2,500 cases of a dozen bottles to go round, although they expect to get to 4,000 cases over the next five years. The blend is half Cabernet Sauvignon with Cabernet Franc and Marselan, a Chinese favourite.

Long Dai will initially be aimed at the status-conscious Chinese market, but they plan to target Chinese expatriate communities in places such as Vancouver and Sydney towards the end of the year.

As tasteful as the winery itself — a low-key, sustainable, modern grey stone edifice on which London-based architect Pierre-Yves Graffe has worked since 2009 — the wine is suitably Lafite-like.

Half of it aged in new casks fashioned in Lafite’s own cooperage in Pauillac, it is as bone dry as the Bordeaux first growth, utterly correct if not absolutely stunning. I expect the 2018 to be even more beguiling. Compared with many of China’s most ambitiously styled reds, Long Dai is notably subtly packaged.

Will it be too subtle for the Chinese? “I have some experience of this sort of thing,” Prats told me, “but I have no idea what will happen. Will people go crazy or be a bit sceptical? I just don’t know.”

Stockists from Winesearcher.com. Tasting notes on Purple Pages of JancisRobinson.com

Follow @FTMag on Twitter to find out about our latest stories first. Listen and subscribe to Everything Else, the FT culture podcast, at ft.com/everything-else or on Apple Podcasts