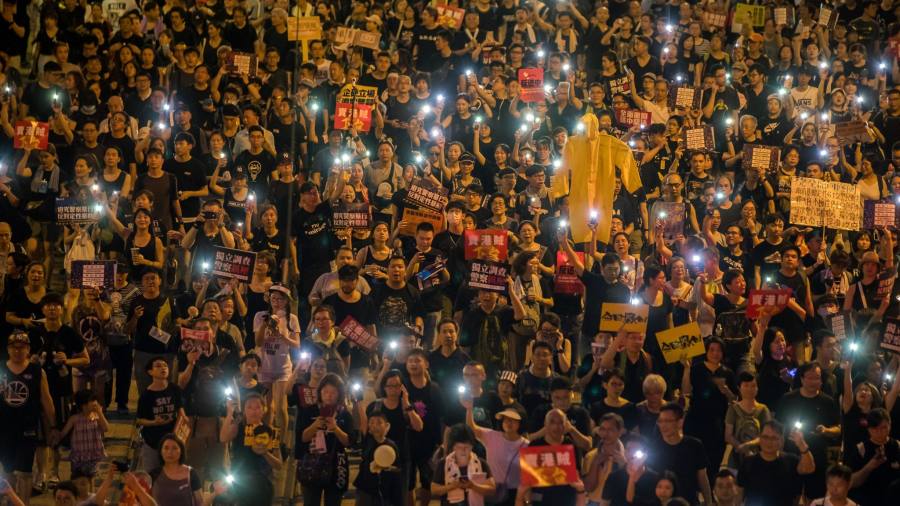 China and the UK were embroiled in a full-scale diplomatic row on Wednesday after Beijing accused the British government of “gross interference” in the affairs of Hong Kong.

In a rare press conference at the Chinese embassy in London, Liu Xiaoming, ambassador to the UK, vigorously attacked the way British ministers have been defending the rights of Hong Kong demonstrators as they seek to protect their freedoms.

“The UK government chose to stand on the wrong side,” Mr Liu told reporters. “It has made inappropriate remarks not only to interfere in internal affairs of Hong Kong but also to back up the violent lawbreakers.”

The ambassador added: “I would like to reiterate that Hong Kong is China’s special administrative region; it is not what it used to be under British colonial rule.”

Mr Liu’s comments immediately triggered a sharp riposte from the UK, which announced that the ambassador would be summoned to the Foreign Office for a meeting with the permanent secretary Sir Simon McDonald.

In recent days, UK prime minister Theresa May and Jeremy Hunt, the foreign secretary, have repeatedly insisted that China must stand by the 1984 Sino-British Joint Declaration that guarantees the rights and freedoms of the people of Hong Kong.

On Wednesday, Mrs May returned to this theme, telling MPs it was important that Hong Kong’s rights were respected by China, saying the “vast majority” of protesters in the city were peaceful despite violence in the legislative council.

However, the Chinese ambassador said the bilateral relationship between the two sides “has been damaged by the interference of the British government” in the affairs of its former colony and that “mutual trust has been weakened”.

Mr Liu said it was “hypocritical” of UK politicians to criticise the lack of democracy and civil rights in Hong Kong when, under decades of British rule, there had been no elections nor right to protest.

Mr Liu said: “We have made strong representations to the British side and we have told them to stop interfering.” He said the UK needed to recognise China’s sovereignty over Hong Kong, its “territorial integrity and principle of non-interference in domestic affairs”.

The Sino-British row over Hong Kong is the latest indication of how relations between both sides are deteriorating.

When George Osborne was UK chancellor, he boosted bilateral business ties and hailed the prospect of the UK and China entering a “golden era” in their relationship.

However, under Mrs May relations have become frostier. In 2018 Mrs May also refused to formally endorse China’s flagship Belt and Road Initiative which would pave the way for a major boost to Chinese investment in the west.

Although Britain’s Conservative government is focused on Brexit and the Conservative party leadership contest between Mr Hunt and former foreign secretary Boris Johnson, UK ministers have lined up this week to defend the 1984 Joint Declaration which established the “one country, two systems” arrangement that guarantees Hong Kong a level of autonomy.

The declaration laid out how Britain would end its century-and-a-half long rule over Hong Kong when its lease terminated in 1997.

Is Dating that is casual Good Relationships? Casual relationship isn’t the same as starting up, even though they will have several things in accordance.