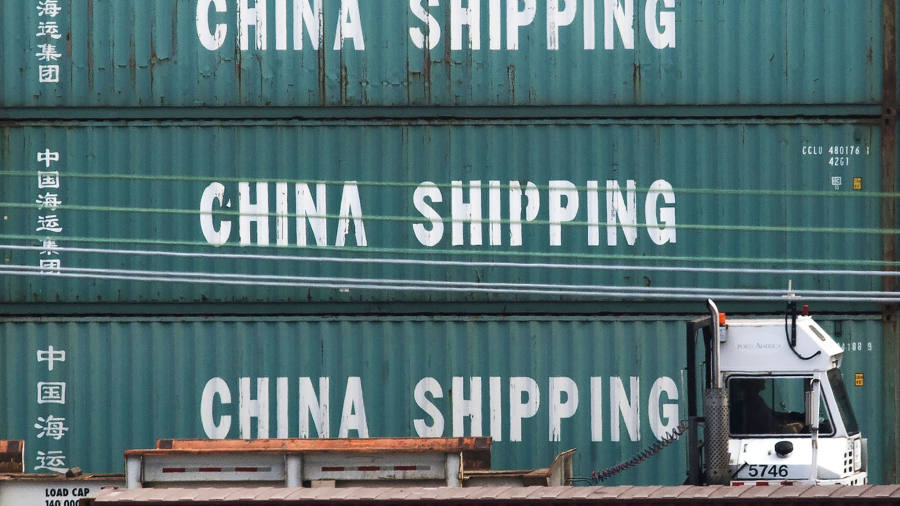 Exports from China fell in August as an intensifying trade dispute with the US took a heavier than expected toll on the country’s manufacturing sector and a forecast temporary increase in orders failed to materialise.

China’s exports decreased 1 per cent last month compared with a year earlier, according to the customs administration, despite the majority of economists polled by Reuters forecasting an increase. The decline compares with a 3.3 per cent rise in exports year on year in July.

Goldman Sachs had forecast that there would be a 2 per cent increase in exports in August because it expected buyers of Chinese goods to “front-load” orders before a new round of US tariffs kicked in on September 1.

The decline in exports was accompanied by a 5.6 per cent drop in imports in August, unchanged from July.

For more than a year, Beijing and Washington have stepped up levies on goods worth hundreds of billions of dollars, hitting a range of goods from medical devices and aircraft components to agricultural products. Both economies have suffered as a result and the dispute is adding to headwinds that have led to slowing growth in China.

The latest round of US tariffs, which took effect last Sunday, were aimed at so-called final goods, such as shoes and clothing manufactured in China, and were expected to hit not only Chinese producers but also US consumers that rely on cheap goods from the world’s second-largest economy.

China responded to the US measures, triggering additional tariffs on US goods including crude oil, although the outlook improved later last week when both countries agreed to restart trade talks — a breakthrough after weeks without positive news on the matter.

The export figures for August also showed that China’s trade surplus, a measure of how much its exports exceed its imports by value, fell to $34.8bn, far below analysts’ expectations. The country’s surplus was $45bn in July.

China’s leaders have demonstrated over the past week that they plan to combat slowing economic growth by pushing banks to lend more to companies, in the hope that a boost to available credit will translate into stronger growth in gross domestic product by the end of the year.

China’s central bank said on Friday that it would cut the amount of reserves it required banks to hold, increasing their ability to lend by Rmb900bn ($126.4bn). The move comes after several similar cuts in recent years, which fuelled hopes that greater lending capacity at banks would translate into stronger economic growth.

The move represented a rapid increase in stimulus measures, signalling that Beijing is growing increasingly concerned over the impact of the trade war.

“We think the tone change . . . reflects rising downward pressure on the economy, which in part was indicated by weaker July activity data and August PMI amid higher US tariffs,” Barclays analysts said on Friday.