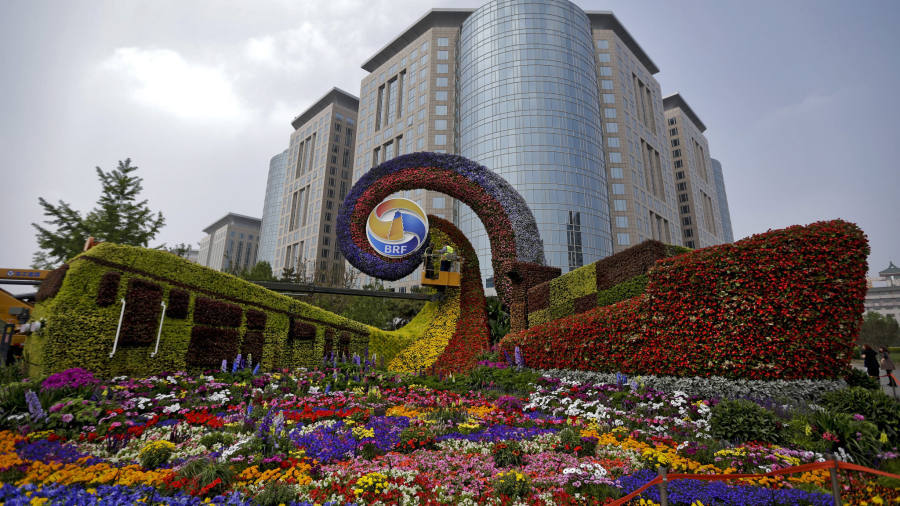 When Christine Lagarde, managing director of the IMF, appeared at the Milken conference in Los Angeles this week, her section of the event was entitled Time of Transition.

But one of the most striking topics she addressed did not concern the IMF — or its economic projections. It came when she was asked about China’s controversial global infrastructure programme, the Belt and Road Initiative. She produced an unexpected flash of optimism.

Ms Lagarde told the gathering of 4,000 financiers that the IMF had been working with the Chinese “for weeks and weeks . . . to explain how debt sustainability matters”. She noted that President Xi Jinping had pledged at last week’s BRI summit to create a new framework to make the hundreds of billions of dollars of debt it has extended for BRI projects more “sustainable”, in both a fiscal and environmental sense.

“The fact that they have now announced [the framework] . . . is encouraging,” she enthused. Another senior official at a multilateral group agreed, saying privately: “The Chinese position has changed recently — they are finally talking to us seriously about [BRI] debt.”

Some financiers might roll their eyes at this. The Chinese government is deft at producing pious pledges about globalisation and Mr Xi’s use of the word debt “sustainability” seems hollow, given the way Beijing has behaved this decade.

China has thrown billions at (often) self-serving infrastructure projects in poor countries and some of them have created environmental and social problems. But what is really striking is how chaotic and opaque this debt binge has been, since the loans are issued by competing Chinese agencies and state-owned enterprises.

This reality undermines the usual stereotype about Chinese planning and makes it difficult to track the scale and terms of these loans — and the real debt burden faced by vulnerable countries.

Given how rapidly reported emerging market debt has swelled this decade, the Chinese contribution is alarming. “The problem is not just that the IMF and World Bank don’t know the size of the debt,” a senior official at one multilateral group notes. “The Chinese themselves don’t know.”

What is clear is that the burden is painful: western analysts estimate that two dozen countries are struggling to repay this debt, and eight — Mongolia, Montenegro, Pakistan, Laos, Maldives, Djibouti, Kyrgyzstan and Tajikistan — are near or in effective default.

Take Tajikistan (a country where I used to live). It used to rely on the World Bank, IMF and European Bank for Reconstruction and Development for loans. But in the past decade Chinese loans have reportedly accounted for four-fifths of the country’s increase in external debts. Few locals expect Tajikistan to repay, and the country has reportedly given land and minerals to China instead. But the situation has been so opaque that the IMF and World Bank have been reluctant to step in.

Unsurprisingly, this morass has sparked rebukes from Ms Lagarde, as well as David Malpass, the new US-backed head of the World Bank. But that is also why Ms Lagarde’s comments this week stood out. As the debt pressures rise, China is facing increasing public criticism (and embarrassment) from countries such as Malaysia. It is also suffering losses: a report by the Rhodium consultancy this week suggests that no less than 38 BRI loans, worth about $50bn, have been restructured in recent years; 14 were debt write-offs, and 11 involved deferments.

Until now, this process has been ad hoc, bilateral and secretive. However, western multilateral officials tell me they were informally consulted when the Chinese restructured a railway loan in Ethiopia and on talks with Zambia. Hopes are rising that this will pave the way for collaboration on measuring the debt. They are also discussing working together on environmental standards and possibly using the Asian Infrastructure Investment Bank as a template to improve governance of BRI loans.

It would be naive to think this will deliver real transparency anytime soon; nor will it prompt China to take the next obvious step and join the Paris Club of responsible creditor nations. Moreover, it is unclear how the White House — and Mr Malpass — will react.

But the wider world should applaud and strongly encourage these hints of change, particularly at a time when relations between China and the west are deteriorating in so many other ways. After all, the first step to dealing with a debt problem is to measure the pain. Fingers crossed that this is done before the global credit cycle turns.