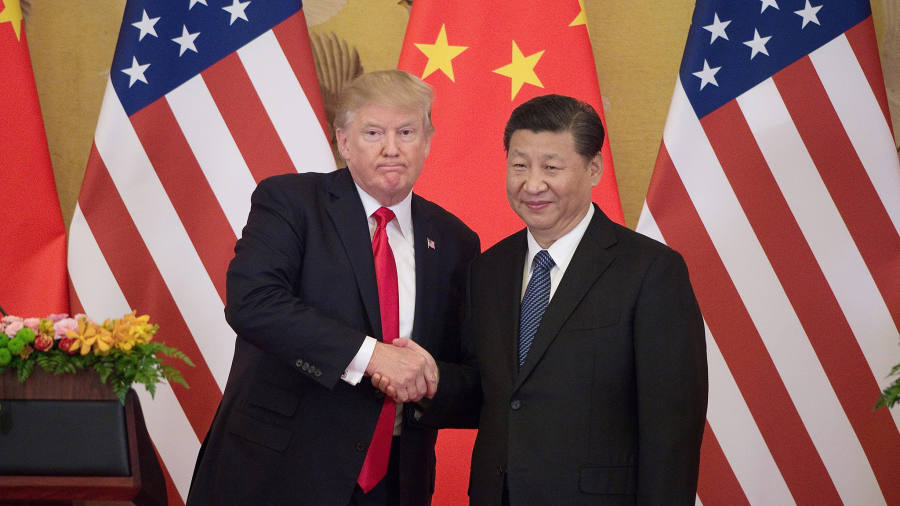 Hopes for an end to the trade dispute between China and the US were set back last month by moves including President Trump’s tariff increase on $200bn of Chinese goods, and US-imposed restrictions on doing business with Chinese telecommunications company Huawei.

These actions ratcheted up the hostility between the two countries, prompting China to implement retaliatory measures.

Last week’s announcement of an “extended meeting” between the US and Chinese presidents at this month’s G20 provided some grounds for optimism. But, for now, the effects of the trade war are spreading.

Domestic US companies are trimming their earnings forecasts. Public sentiment reflects unease. More than six in 10 Americans are very or somewhat concerned that their local economy will be negatively affected by trade tensions with China, found a recent poll by Monmouth University.

Broader economic growth is expected to take a hit. The US-China tariffs could reduce global gross domestic product by 0.5 per cent in 2020, which would amount to the loss of roughly $455bn, warned IMF managing director Christine Lagarde in a June 5 blog post.

“Indeed, there is strong evidence that the United States, China, and the world economy are the losers from the current trade tensions,” Ms Lagarde wrote.

Investors, too, are feeling the pressure. With US-China trade relations seemingly rockier from one day to the next, some asset managers and advisers are finding the risks in the emerging market outweigh the benefits, at least in the near term.

Lori Heinel, deputy global chief investment officer at asset manager State Street Global Advisors, says emerging markets, in general, have seen a growth slowdown in the last year to year-and-a-half. She also raises the question of whether and when the US, which is experiencing a prolonged economic cycle, will face a correction or even a recession.

Against this backdrop, “the recent escalation in some of the trade conflicts has rendered China an even more precarious EM”, says Ms Heinel. “The concern we have right now, and one I think we’re seeing play out in the markets, is how does this trade spat . . . feed into the economy?”

In an effort to limit risk, she says, State Street is currently underweight on China in EM portfolios, whereas roughly a year ago, it was overweight. The manager is also repositioning by moving into domestic and financially oriented companies, those that should be better insulated from geopolitical tensions.

Advisers say a long-term horizon, when it comes to China, is critical. On the one hand, it is a challenging time to consider investing in the country, says Eric Leve, executive vice-president and chief investment officer at Bailard Institutional, a registered investment adviser (RIA) that is part of this year’s FT 300.

But in 2019 so far, China has outperformed the wider emerging markets, he adds. This has helped the CSI 300 — an index of China’s top stocks — to a rise of about 7 per cent over the past 12 months, according to Capital IQ figures, compared with a 2 per cent fall in MSCI’s EM index.

Mr Leve thinks this outperformance masks the impact of the trade tensions. But with China’s weight within many EM indices set to exceed 30 per cent, he argues it is too important a market to ignore. Investors “can’t avert their eyes from it, but one has to, as they view it, be very careful,” Mr Leve says.

One option to lessen the risks is to consider Hong Kong, which offers the ability to enjoy the benefits of broader Chinese growth “without the overhang of the trade dispute”, says Mr Leve, who has been with Bailard for more than 30 years. He acknowledges that mass protests this month, fuelled by a since suspended extradition bill, could raise concerns among investors. But he still thinks Hong Kong’s outlook is good over the medium term.

Considering emerging markets on the whole, Litman Gregory recommends a 20 per cent exposure to these markets in the equity portion of client portfolios, an effort designed to decrease the exposure that can arise when any one market sees a decline, he says. It is also wise to use active managers in EMs, particularly in China, says Mr Jain.

“Managers who are on the ground, who are looking at companies and assessing the risks, are better suited than just a passive investment,” he adds. These investment professionals can meet company and government officials to get a sense for what the risk factors are.

For Mr Jain, the downsides at the moment are the unknowns for China’s economy — and that concern is not limited to the trade negotiations with the US.

Advisers at Litman Gregory, also an FT 300 constituent, worry “enormously” about how credit excesses and likely low returns on some investments in China will “ripple across the economy”, according to Mr Jain. Added to that, the ongoing trade dispute is not supportive of global growth, he says.

It is a “tricky balancing act”, Mr Jain says of investing in China. “The market is becoming increasingly relevant from an investment standpoint.” But when accounting for the risks, he adds, “we are far from being China optimists”.