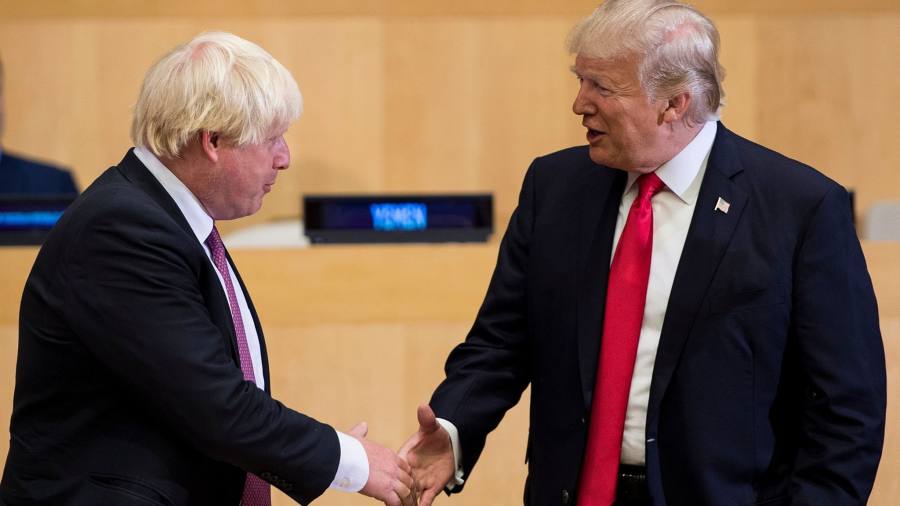 A populist is someone who abhors the metropolis and demands its respect. According to the cultural right, big cities are teetering Babels, lawless and ghettoised, but also wealth-hoarding success stories that look down at the conservative provinces. “You crammed and besieged losers,” this Tom Wolfe-ish attitude to urbanites seems to say, “we are just as good as you.”

All of which helps to explain why some British populists back a foreign president over the mayor of their own liberal capital. The running tiff between Donald Trump and Sadiq Khan is modern politics — closed versus open — in miniature.

But there is more behind the courtship of the visiting president than that. There is foreign policy at work. The British right sees the US as a natural companion in a post-Brexit world. If a no-deal Brexit puts the UK out in the European cold, it hopes to warm its hands on the fire of a fast-growing America.

That hope should be checked. British conservatives have been misreading American ones since Dwight Eisenhower declined to look away as the Suez Canal was summarily invaded. Yes, there is a promising bonhomie between Mr Trump and Boris Johnson, the former UK foreign secretary. And the US right cherishes the nation state, not the EU, as the last word in human organisation. Both countries also talk an excellent game about a bilateral trade deal.

They just happen to have divergent interests on the largest question of the century, that’s all. Even before Brexit, the UK viewed China as a commercial opportunity. Its disposition will have to become even warmer once it loses full membership of its own continental trading bloc. It is not in a position to pick and choose its economic friends.

All the while, the US is moving in the opposite direction twice as fast. It is actually more suspicious of China than it was when it began its tariff campaign a year ago. What could then have been explained away as one quixotic president’s attempt to secure better trading terms has become a wider confrontation. Mr Trump’s views have caught on in formerly laissez-faire boardrooms and in once-orthodox Washington symposia. To call it a consensus is a leap. Some eminent Americans hope to rattle China a bit and leave it at that. Others aspire to nothing less than the eventual decoupling of the two economies. But the general direction of US thought, and its incompatibility with the UK’s Chinese interests, is unmistakable. And possibly intractable.

If this seems a more theoretical than actual problem, then look to the recent past for a case study. In 2015, when London signed up to the Beijing-led Asian Infrastructure Investment Bank, Washington chafed at this “constant accommodation” of China. And that was under the Barack Obama administration. Imagine a replay under Mr Trump or another populist.

Because Britain has long been out of the superpower business, the rise of China has no implications for its own status. Its economic interests and its foreign policy can be almost the same thing. The US is in a very different predicament. It is a ruling power facing demotion by (in its mind) a revisionist one. Its foreign policy has to go beyond entrepreneurial nimbleness.

No doubt, close partners can bicker over one thing while remaining in broad concert. But it is an odd partnership that contains such opposing views on quite so important a third party. As time wears on, this strategic tension cannot be glossed over with the usual grammar of UK-US meetings: the one-sided flattery, the talk of “cousins” that belies the non-British ancestry of even most white Americans. This state visit had its stresses. The question of the tech giant Huawei, which the two countries view with differing levels of suspicion, came up. Such wedge questions are likelier to multiply than to recede over the years.

Singapore, Germany, Australia, Brazil: lots of countries hope not to have to choose between the US and China. But the UK plan — to be ultra-intimate with the one while profiting from the other — is another order of ambition.

That British conservatives put so much hope in Mr Trump, and found Mr Obama’s anglophilia so wanting, only defeats their own argument. The “special” relationship, it seems, is a transcendent fact of the world, as immutable as force equals mass times acceleration, and yet entirely dependent on whoever is in the White House at any given moment.

Well, for now, that occupant is Mr Trump. Sympathy for Brexit is certainly one part of his worldview. But mistrust of China is much the larger. It is not a mistrust all countries can afford.