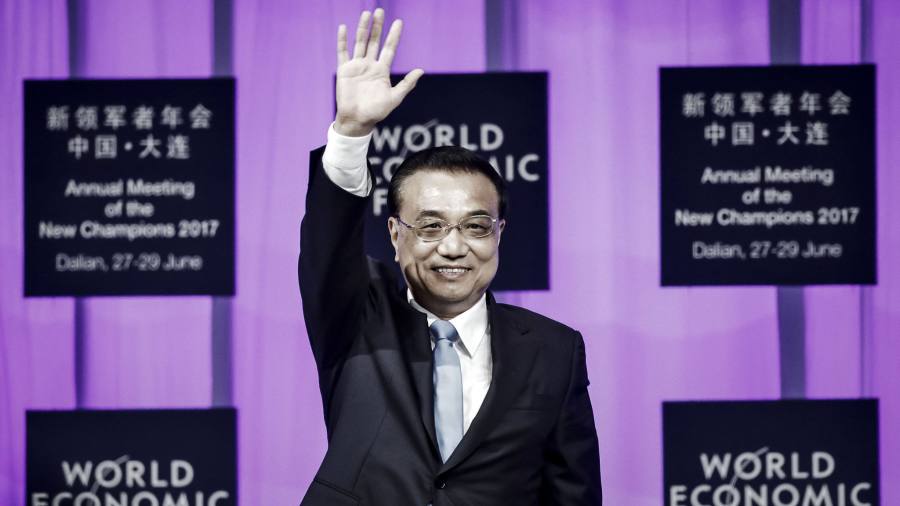 Chinese premier Li Keqiang said the country would allow majority foreign ownership of domestic securities companies by next year, opening up its financial sector ahead of schedule as he looked to bolster claims that China is a champion of globalisation.

On Tuesday, Mr Li announced that China would bring forward the removal of foreign ownership limits on domestic securities companies to 2020, a year earlier than planned, in a speech at the World Economic Forum in Dalian.

Chinese regulators approved applications by JPMorgan and Nomura to establish majority-controlled brokerages in March, after UBS received the first such approval last year. Officials had promised a range of measures to liberalise the financial services industry in late 2017 but they were put on hold as the trade war between the US and China intensified.

The moves are part of Beijing’s drive to attract overseas capital to the country’s stock and bond markets. China is set to become a net debtor this year for the first time since 1993, and will need greater foreign inflows to finance its expected current account deficit.

Peter Reynolds, head of greater China at consultancy Oliver Wyman, said the moves could reassure companies that the country would offer more real returns rather than continued promise.

“No longer is ‘being in China’ enough to guarantee growth . . . a clear customer value proposition and carefully tailored strategy to tap into the right pools where firms have a competitive advantage is needed,” he said.

Tuesday’s announcement came on the heels of a trade truce struck between Donald Trump and Xi Jinping at the G20 summit in Osaka, after the two leaders agreed to resume talks and hold back further tariffs on goods while negotiations continued.

Officials from the world’s two largest economies had been negotiating for months in an effort to resolve the trade war, only for talks to collapse at the last minute over issues such as intellectual property rights and the enforcement mechanism for a future deal.

Mr Li announced the easing of restrictions alongside a broader defence of globalisation, saying “we are all passengers in the same boat” in a world of rising economic risks and slowing global trade.

He added that “all have benefited in this process” of free trade — in stark contrast to Mr Trump, who has railed against what he perceives as China’s unfair advantage on trade. Mr Li urged the World Trade Organization not to waver in its mission of free trade, saying China was seeking a “level playing field”.

Describing China’s response to slowing growth, Mr Li said it was “natural for the government to tighten its belt”, saying he would consider gross domestic product growth of 6 to 6.5 per cent this year to be substantive progress.

He added that tax and fee cuts to support growth would total $300bn, enabling the country to increase spending on research and development.

Addressing persistent criticism of China’s management of its currency, Mr Li said the country “would avoid competitive devaluation” and keep the renminbi “at a reasonable equilibrium level”.

The US Treasury decided against labelling China a currency manipulator in May, but kept the country on the list of nations it monitors for unfair economic practices.

Catholic and seeking for love on the web. Why are so many people not any longer depending on old-fashioned ways to find their partner?