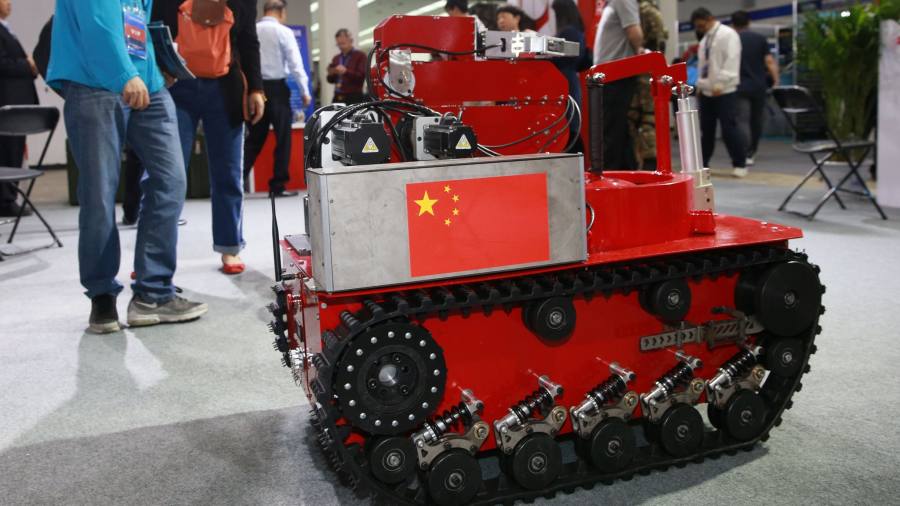 While the US has launched a barrage of criticism of China’s trade practices this week, the country’s government officials have been subdued in their response. But even as Beijing was publicly calling for “mutual respect”, a much more hawkish faction was airing their discontent at home: the military-industrial complex.

“I very much hope that the negotiations will break down,” said Dai Xu, a professor at China’s National Defence University and a retired air force colonel.

“Once the negotiations are over, the United States will be finished, for sure . . . we kick out all the American companies and bring all of ours back . . . No way will Trump be re-elected,” he added.

Mr Dai was speaking at a forum on military-civil dual-use technology in Beijing this week, a forum organised by a group of mostly state-owned military companies to encourage more civil-military partnerships in technology development.

Private and state-owned companies used an exhibition at the fair to show off their latest high-tech devices, including prototypes of sleek black military drones, underwater missiles and miniature tanklike robots that scanned the underground structure of roads.

But beyond the gadgets, the hawkish stance among the attendees — current and retired military officers, defence company chiefs and academics — highlighted how Beijing wants to present a tough stance to its citizens at home, while at the same time being more flexible in its negotiations with Washington.

“[President] Xi is very concerned about his authority, as he doesn’t want to be seen like Yuan Shikai,” said Wu Qiang, a commentator and former politics lecturer at Tsinghua University, referring to a former Chinese leader who was seen as conceding too much to foreign powers.

The slogan that was often repeated throughout the two-day forum was “autonomous and controllable” — a reference to China’s desire to develop its own technology and supply chains. Many of the speakers at the forum were anxious about China’s shortcomings in these fields and all acknowledged the need to boost self-sufficiency at a time when they believe the US wants to limit the country’s rise.

What’s the meaning of remembering the history without the hatred? It’s meaningless

“The US openly sees us as their biggest enemy,” said Tan Yungang, an air force colonel. “The United States will block China more than they did the former Soviet Union,” he added, arguing that Washington had been implementing a series of “technological blockades” against Beijing in order to maintain its own dominance.

The increase in tariffs, Mr Tan said, was not only a way of adding pressure in the trade talks but was also an “intentional” measure to force supply chains to move back to “the US, Europe and Japan”.

The US extradition request for Meng Wanzhou, chief financial officer of Huawei who has been detained in Canada since December, “was manufactured to completely contain” the telecoms group, he said.

The US is going downhill, and “screaming loudly is a sign of their decline”, said Liu Honghai, secretary-general of the China Science Centre of the International Eurasian Academy of Science, a research group.

Mr Liu wants China to build an alternative power bloc through its Belt and Road Initiative, the huge infrastructure building programme and Mr Xi’s flagship foreign policy. Last month, Mr Xi announced China had signed $64bn in deals with countries as part of the BRI. But China has been accused of practising “cheque book diplomacy”, with that leaves some countries mired in debt after the infrastructure projects prove unsustainable.

Yu Shiguang, an officer at the Investment Association of China, a government-run industry body, echoed this view, saying that the world was dividing into different centres of power. “The world we are about to enter will not be an era of peace and development, it will be an era of strategic separatism,” he said. “Trumpism is just American imperialism but one that is ‘America First’ and more savage, bloodier and more warlike.”

Some in China’s state media have supported the fiery rhetoric, pushing the message to a much wider audience. “If you want to talk, we can talk, if you want to fight, we will fight”, read the headline of an article published on the blog Taoran Notes. it referred to the Korean war, in which China intervened on North Korea’s behalf against the US, saying that “for two years, [the sides] were fighting while negotiating at the same time”. The article was quickly reposted by both The People’s Daily and Xinhua, the state media outlets.

“Chinese people need to have backbone,” said Prof Dai. “I am very opposed to one of our traditional concepts, which is that no matter how much others have hurt China, we are educated to forget . . . what’s the meaning of remembering the history without the hatred? It’s meaningless.”