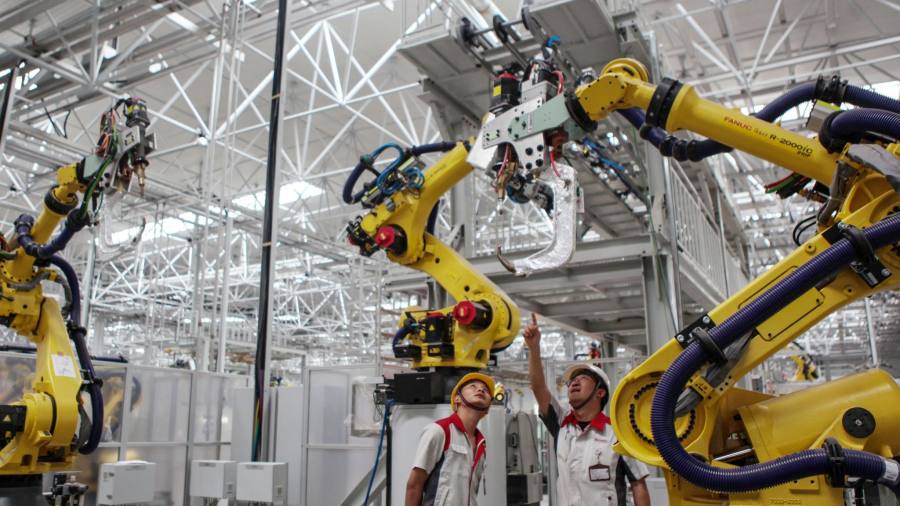 Chinese factory output slowed to its weakest pace on record last month, adding to pressure on Beijing to unleash further fiscal and monetary stimulus as the trade war with the US remains unresolved.

Output growth in China’s industrial sector slipped to 5 per cent year on year in May, according to official statistics, with sectors such as automobiles, medical products and computer equipment seeing the sharpest slowdowns.

US trade talks stalled in May, with US president Donald Trump announcing Washington would raise tariffs on $200bn of Chinese goods by 25 per cent and put telecoms group Huawei on a restricted export list.

Beijing retaliated by increasing levies on about $60bn of US imports this month, though customs data showed Chinese exports beat expectations in May partly as companies rushed to ship orders before the new tariffs went into effect.

Analysts said the slowdown was mainly the result of weaker domestic demand.

One reason was Beijing’s decision to pull back on government stimulus in April as relations with the US appeared to improve, according to economists at Goldman Sachs, although they added that the trade war affected domestic demand via “impacts on expectations”.

Beijing has signalled new stimulus efforts in recent weeks, with local governments told to increase the use of bond issuance for large infrastructure projects, and some analysts forecasting further measures in the coming weeks.

Yi Gang, governor of the People’s Bank of China, said last week that there was “tremendous” room to make monetary policy adjustments if the trade war worsened, though Beijing is also keen to avoid a rapid increase in the country’s overall debt.

“Fiscal stimulus could increase and will mainly be through speeding up existing infrastructure investment as planned as well as adding new infrastructure projects,” said Iris Pang, chief China economist at ING.

“We expect China’s economic growth to ease in the second quarter, before stabilising later in the year in response to the macro policy easing,” said Louis Kuijs of Oxford Economics.

But he added: “Further escalation of tension with the US will certainly weigh heavily on Chinese exports to the US and hurt consumer and investment confidence in China, and undermine China’s growth outlook beyond the near term.”

Other sectors of China’s economy showed more resilience in May, with retail sales growing 8.6 per cent up from 7.2 per cent the previous month.

The pace of industrial sector growth, down from 5.4 per cent in April, was in effect the weakest reading since that data series began in 1995.

Though January 2001 was technically weaker, at that time the statistics bureau published monthly data for January and February separately, suggesting that the figure reflected lunar new year distortions.