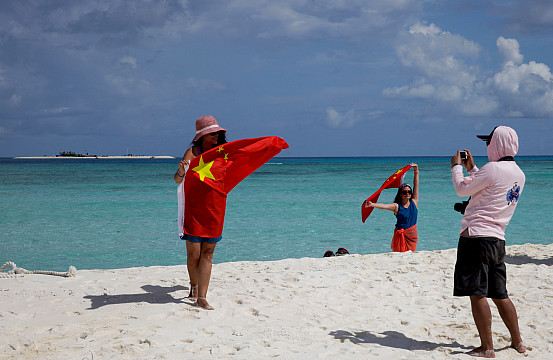 On August 21, China’s newest South China Sea supply ship completed its maiden voyage to the Paracel Islands. Christened the Sansha 2 on July 12, the 8,000-ton ship was handed over to the Sansha City government on July 31 at the Wenchang Qinglan Port in Hainan province. Guangzhou Shipyard International, which built the ship, claims the Sansha 2 will “play an important role in guarding the motherland’s southern gate,” a reference to Sansha City’s mission of defending national sovereignty and protecting China’s maritime rights and interests in the South China Sea.

The Chinese government established Sansha as a prefecture-level city in July 2012 to administer the entirety of its claims in the contested South China Sea. Headquartered on Woody Island in the Paracel Islands, Sansha City has progressively bulked up its logistics capabilities.

Initially, the city commissioned the 7,800-ton Sansha 1 supply ship. CSIC Bohai Shipbuilding Heavy Industry, a Chinese state-owned enterprise, won the contract in December 2012 and started construction in 2013. The Sansha 1 conducted its maiden voyage from Hainan to Woody Island in January 2015. According to reports, the Sansha 1 was designed to travel at 19 knots, endure voyages of up to 6,000 nautical miles, and carry around 450 passengers. By January 2019, the Sansha 1 had allegedly sailed over 80,000 nautical miles across 203 voyages, carrying 110,000 people, 9,000 vehicles, 50,000 tons of fresh water, and 90,000 tons of cargo.

As one of Sansha City’s vital lifelines to the outside world, the Sansha 1 has helped transform Woody Island into a hub of civilian, administrative, and law enforcement activity in the South China Sea. Once a remote outpost, Woody Island now hosts a growing population, a school, numerous banks and shops, new port infrastructure, and a maritime militia.

By early 2016, however, the Sansha City leadership was already exploring the idea of building another supply ship, the Sansha 2. Construction of this new ship began in December 2017. Compared to the reported 120-meter length and 20-meter width of the Sansha 1, which displaces 7,800 tons, the Sansha 2 displaces 8,000 tons and roughly measures up to 128 meters long and 20.4 meters wide.

The ship is expected to perform a variety of functions, which include bringing supplies to the islands and reefs of Sansha City, exercising administrative control within the South China Sea, performing rescue operations, and assisting scientific surveys. Such activities are often framed as assertions of China’s sovereignty.

Though perhaps not quite as exciting as missile tests or the Haiyang Dizhi standoff between Vietnam and China, the Sansha 2 is no joke. For one thing, the launch of this ship is just one of several recent upgrades to Sansha City’s capabilities; the Sansha 2 will enter into service just weeks after China installed 5G stations in the Paracel and Spratly Islands. Moreover, this improvement to the city’s logistics means that transporting vital supplies, personnel, vehicles, building materials, and anything else to-and-from the middle of a geopolitical flashpoint just became 8,000 tons easier.

Zachary Haver is a Washington DC-based research consultant working on the South China Sea, maritime infrastructure, and Chinese investment. Follow him on Twitter at @zacharyhaver.