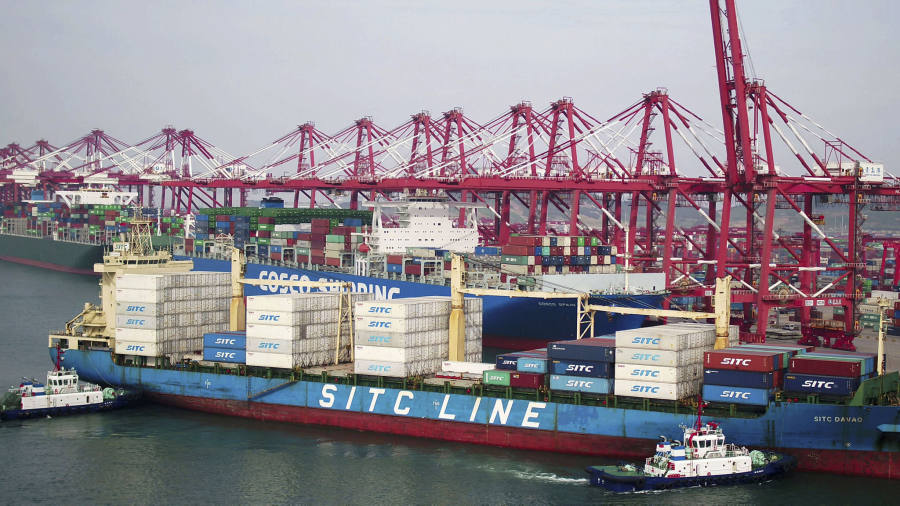 The rapid deterioration of trade talks between the US and China this week has caught Chinese businesses off guard, with many companies saying they cannot shoulder the huge additional costs and lack viable options to immediately modify their supply chains.

“The news has come too quickly so exporters haven’t had the time to react or negotiate with their US counterparts or apply for government exemptions,” said Willy Lin, who owns garment factories in China and is chairman of the Hong Kong Shippers’ Council.

The US increased tariffs on $200bn worth of Chinese products from 10 per cent to 25 per cent on Friday and Mr Trump said he was “starting the paperwork” on Thursday to impose 25 per cent levies on Chinese goods worth an additional $325bn.

Some export industries in China will be hit harder than others with electronics, computer circuit boards, computer parts, furniture, floor coverings and automotive parts disproportionately burdened by the increased tariffs.

On Wednesday, a US trade official said the higher tariffs would apply to products exported from China starting on Friday but not goods already in transit. This gives US and Chinese negotiators a window of two to four weeks to hammer out a deal before the bulk of the pain from the 25 per cent tariffs hits US consumers and businesses.

But many businesses in China are already struggling to stay afloat since the US imposed 10 per cent tariffs in September last year. They say while they tried to share these costs with their US counterparts, they will now have no choice but to pass on a significant proportion of the latest tariff increase to their customers.

“Margins on electronics products are on average in the single digits so it is impossible for exporters to share the costs from the additional tariffs,” said Herbert Lun, a manufacturer of haircare electronics in China who ships three-quarters of his products to the US.

“The US importers will have to absorb it and transfer it on to consumers,” Mr Lun added.

The uncertainty and volatility created by the trade war has led to businesses delaying investment and expansion plans. Some Chinese manufacturers have adjusted their supply chains by moving manufacturing and warehousing to south-east Asia, Mexico and Canada, said Jon Cowley, a trade law expert at Baker McKenzie, the law firm, in Hong Kong.

“The tariffs will have a gigantic impact on my business,” said Michael Zhuo, who exports electronic parts for cars, with 40 per cent of his products going to the US.

“But my colleagues and I are hoping there will be a deal in the next few days. There is a saying in Chinese we like to use to describe Trump and how quickly he changes his mind: ‘His mood changes faster than he can pull down his pants’.”

Mr Zhuo said he considered moving his manufacturing line to south-east Asia after he was hit by 10 per cent tariffs in September. He decided against it because it would have been to difficult to find land, build relationships with local government and most important, he is unconvinced Mr Trump is serious about sticking with long-term tariffs.

Other manufacturers said US buyers would struggle to find alternative suppliers immediately but in the long run, Chinese companies would need to consider moving their factories to south-east Asia or eastern Europe.

“Our US counterparts mostly absorbed the 10 per cent tariffs but the 25 per cent tariffs are too much to bear,” said Thomson Lai, chairman of an industrial electronics manufacturer that sells about 20 per cent of their products to the US, adding his partners would probably pass on the new tariffs to consumers.

Businesses are also bracing for China’s response. Washington’s tariffs will directly hit Chinese automotive parts suppliers but it is also likely that US-made parts will suffer from retaliatory tariffs imposed by Beijing.

“This, in combination with decreasing sales and profits in the Chinese car market will add more pressure to the already dire financial situation facing Chinese carmakers, especially joint-venture car manufacturers with US counterparts,” said Zhong Shi, a committee member of the China Automobile Dealers Association, an industry body.

Economists at Barclays estimate that a 25 per cent tariff on $200bn of exports could cut China’s growth by half a percentage point over 12 months, and as much again if Mr Trump acts on his threat to penalise an additional $325bn worth of exports.

Others analysts argued Friday’s tariffs would not have a massive additional impact on China’s growth since exports are already a significant drag on gross domestic product due to previous developments in the trade war and the depressed global trade environment.

“This will have an outsized impact on markets but not much of an impact on China’s underlying growth story,” said Andrew Polk at Trivium, a Beijing-based consultancy.

Does the demise of QuickQuid sign the end of payday advances?