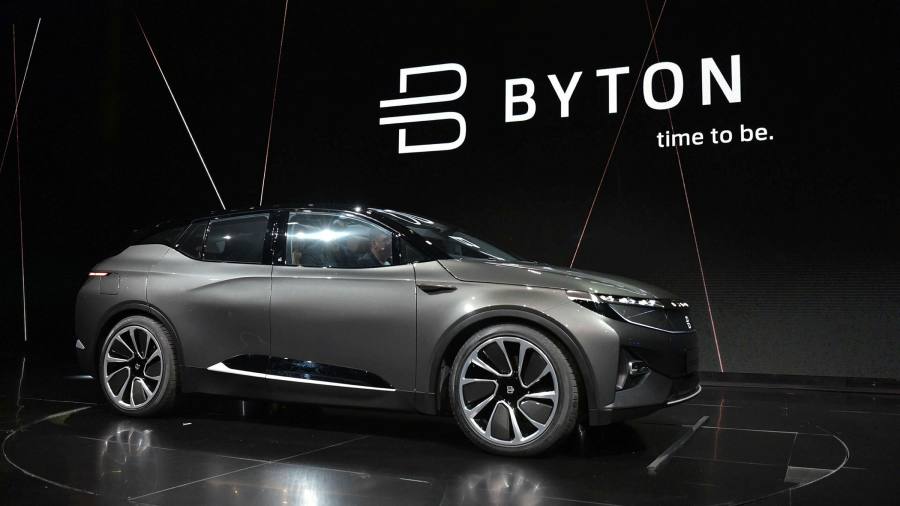 Chinese electric car start-up Byton is suspending operations and furloughing staff, making it the first high-profile victim of a shakeout in the country’s electric vehicle sector exacerbated by the coronavirus outbreak.

From Wednesday Byton will furlough all staff involved in production and halt the majority of its operations in China for six months, it said in a statement, and will begin a process of cost-cutting and reorganisation.

“Covid-19 has posed great challenge to Byton’s funding and business operation,” the company said, adding that management and shareholders are “working closely” on a road map for the future.

Byton, which has about 800 employees in China, has faced protests from staff over lack of pay and has vacated offices in Beijing and Shanghai in recent weeks, according to employees and local media reports.

Founded in 2017 by former Nissan and BMW executives, Byton had become a leading name among hundreds of electric vehicle start-ups seeking to capitalise on a shift away from traditional fuel-burning cars in the world’s largest automotive market.

But sales of battery-powered and hybrid cars in China have been in decline since August last year, falling 23.5 per cent year-on-year in May, as the withdrawal of once-generous government subsidies put the brakes on a decade of rapid growth. Analysts reckon only a handful of companies will survive sector consolidation.

“The consolidation of the EV sector in China is happening right now,” said Tu Le, founder of Sino Auto Insights, a consultancy. “What would’ve taken 12 to 18 months without Covid took four to six.”

Even before the pandemic Byton — which has not sold a single vehicle — was under pressure to secure fresh funding and get production off the ground. The drop in demand for cars caused by the global health crisis has deepened the pressure.

On Monday, China’s state broadcaster CCTV reported that Byton was facing a “crisis”.

China has set ambitious goals to shift towards cleaner vehicles, aiming for 25 per cent of sales to be electric by 2025 from around 5 per cent now.

But Beijing is increasingly unwilling to foot the bill for the transition to EVs, and as a result Chinese EV start-ups, especially those that have not yet started selling cars, are rapidly losing leverage with investors, Mr Le said.

Byton, which is backed by state-owned carmaker FAW Group, had pledged that its M-Byte sport utility vehicle, which features a 48-inch touch screen, would be among the most technologically advanced vehicles on the market and a rival for industry leader Tesla.

Technology groups Tencent and Foxconn were early backers but have not participated in recent fundraising.

Some of Byton’s competitors have managed to secure investment in the nick of time. Nio announced in April that it had secured a Rmb7bn ($989m) cash injection after months of cost-cutting in the face of warnings of impending insolvency.

China’s threats to the UK risk being more than ‘loud thunder, little rain’

China says ties with US at lowest point since 1979