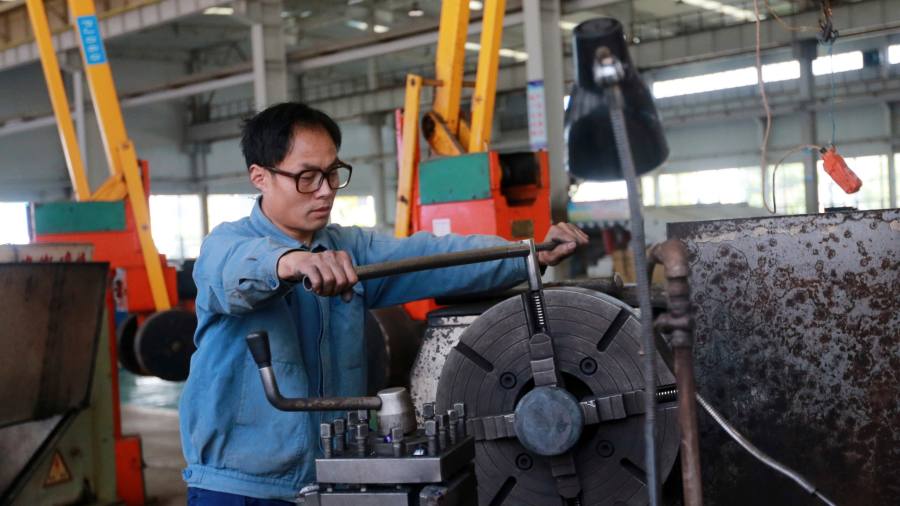 Activity among Chinese factories expanded ever so slightly in May, a private survey showed on Monday, as a modest rise in exports defied a significant ratcheting up in the country’s trade war with the US.

The Caixin-Markit China manufacturing purchasing managers’ index came in at 50.2, unchanged from the previous month and ahead of the reading of 50 forecast by economists polled by Reuters. The reading has now come in at more than 50, which indicates expansion in factory activity, for three months in a row.

The positive reading comes despite a substantial rise in trade tensions with the US during May. US President Donald Trump during the month announced increased tariffs on about half of all Chinese exports to the US, worth about $250bn, and ordered the Department of Commerce to put Shenzhen-based Huawei on an “entities list” restricting its access to essential US components and technologies.

China responded by increasing tariffs on about $60bn dollars worth of US imports, which came into effect over the weekend, and announced it would establish its own blacklist of foreign companies that harm the interests of Chinese groups. Both sides began collecting the tariffs on Saturday.

Beyond the headline number, the Caixin-Markit China PMI data painted a mixed picture of the country’s economy. While export orders posted their best showing since January, business confidence among Chinese manufacturers slipped to its lowest level since the data series was first published in 2012.

“The trade tensions between the United States and China are having an impact on confidence,” said Zhengsheng Zhong, director of macroeconomic analysis at CEBM Group

Last week, an official gauge of activity at Chinese factories registered a reading of 49.4, down from 50.1 in April. Perhaps more worryingly, a key employment indicator tumbled to a 10-year low. The Caixin-Markit PMI data is more focused on smaller, private companies in the world’s second-biggest economy.

China lowered its annual growth target earlier this year to 6 to 6.5 per cent, in what would be the slowest growth rate for three decades.

Climate Cooperation With China Can Power the World – Sustainably

How to Compose an Essay on Each and every Topic: Effortless Tips