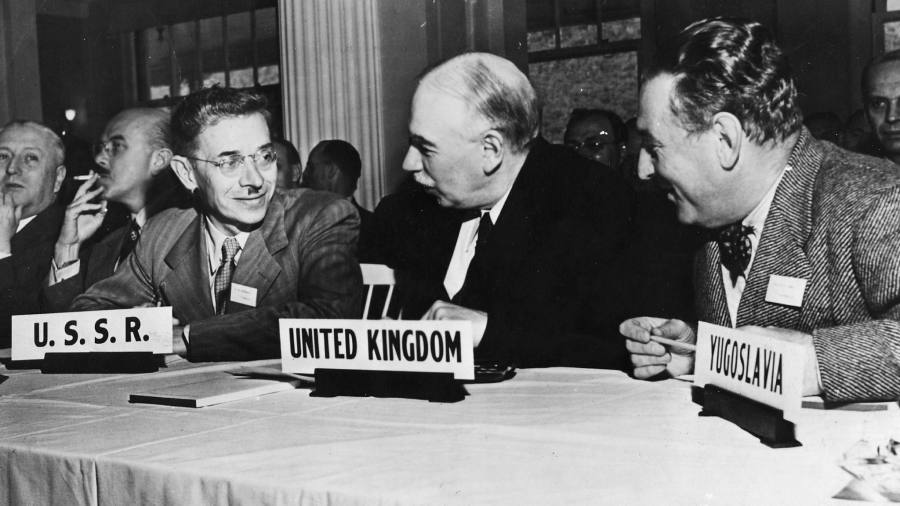 It would be tasteless to crown the geopolitical winner of the coronavirus pandemic. What a blessing, then, that there isn’t one.

Not one global power has distinguished itself of late. From the US, there has been no Bretton Woods or Desert Storm in this crisis: no herding of allies into concerted action. Even if President Donald Trump had the inclination for such work, he does not have the finesse.

The mistake is to bank on a change of president this November to restore America’s old knack for leadership. The problem goes deeper than any one man and touches on the country’s underlying dividedness.

The US can afford two squabbling parties. It cannot afford two different accounts of the truth. The discrepant seriousness with which Red and Blue America have taken the virus outbreak is not just a domestic problem. It compromises Washington’s ability to lead any other nation. For all his diplomatic grounding, a President Joe Biden — the Democrat is polling well against Mr Trump — would face the same constraint. A nation’s leadership abroad is not somehow removed from its internal coherence.

But then nor has this been the Chinese Moment either. Beijing has squandered credibility through its lack of candour. International recriminations as to the origins of the virus have only just begun.

As for Europe, its response to the pandemic now spans British vacillation and Hungarian autocracy. It has thrown up no version of Gordon Brown (the then UK prime minister) during the crash of 2008: no leader with the nous and political grip to maximise their nation’s middling clout. At EU-level, we are back to the eternal question of whether “ever closer union” is to include common public debt.

As its one service to us, then, the pandemic is exposing the true state of global affairs in the early 21st century.

It is now plain enough that we no longer live in a unipolar world. But then nor do we exactly live in the bipolar one of such loud and recent billing. When it matters, the established power is too dysfunctional to lead but its rival lacks the capacity or the trust to fully supplant it. Neither is there a persuasive third power or coalition of countries.

Settle in, therefore, to what we must call the non-polar world. It might last a while. No one nation is formidable enough to shepherd the global commons, but at least two are too large for international institutions to direct. The resulting lack of control passes unnoticed most of the time. In a crisis, it tells.

Eight years ago, the risk consultant Ian Bremmer anticipated this state of affairs in his book, Every Nation for Itself. In a “G-Zero” world, he wrote, “no single country or bloc of countries has the clout to impose a solution.” A lot of globaloney weighs down the world’s nonfiction bookshelves, but it is increasingly hard to deny his prescience.

With luck, one victim of the crisis will be all the lurid and premature talk of a “second cold war”. The term attributes more structure to the world than it really has. True enough, the US and China are mutually hostile — even more so than before the pandemic.

But the point about the cold war is that it did not just pit two powers against each other. It arranged much of the rest of the globe into more or less coherent blocs. It gave shape to international relations for half a century.

Maybe this great planetary cleaving will happen again. For now, though, the world is much more fragmented than that. It is not as if the US is curating the west’s antivirus response while China takes the lead in its own equally cohesive camp. Instead we see national strategies, arrived at nationally. Even regional co-ordination is scarce.

And this is the trouble. A flawed world structure, led by flawed powers, can be better than no structure at all. The 19th-century radical Alexander Herzen used the metaphor of a “pregnant widow” to describe the lull between historical eras. That is, one dispensation has expired and its successor is yet to be born.

This interim is so fraught because there is no controlling power. The 1930s come unpromisingly to mind, when Pax Britannica was on its bandy last legs but the US and the USSR had not yet usurped it. For all the later agonies of the cold war, the world had a semblance of predictability then that it lacked in the free-for-all Thirties. The mistake is to think we are living through a repeat of the former, when the crisis is much more evoking the second.

Horror vacui, or fear of the void, was an old principle of art. It rejected the idea of empty space in a painting. History does not even allow the choice. From time to time, it throws up a vacuum. Whether this one will be quite as anarchic as the last, it is our burden to find out.