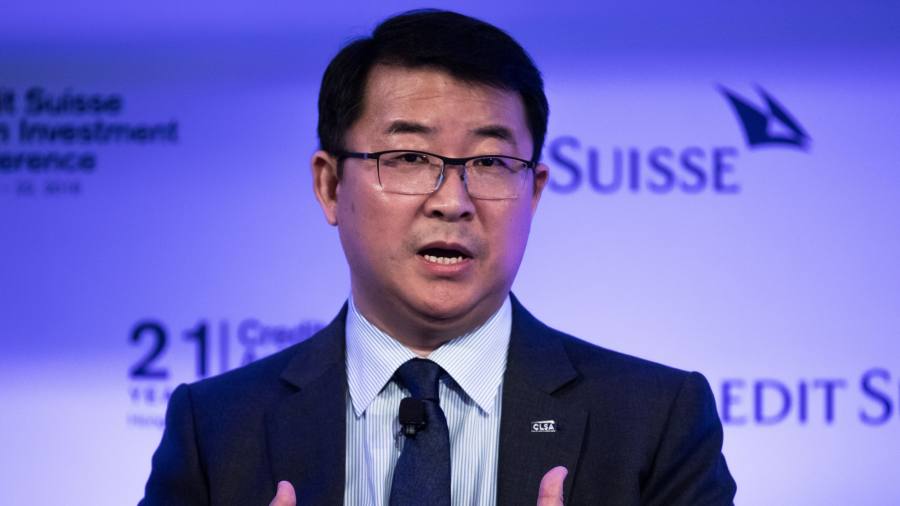 Credit Suisse has appointed Tang Zhenyi as its chief executive for China, where the Swiss bank has recently been moving to expand its business.

Mr Tang, who abruptly left Citic-owned CLSA in March as part of a management exodus at the Asia-focused broker, will be based in Beijing.

The Swiss bank said in a statement on Monday that Mr Tang would take responsibility for “execution of Credit Suisse’s strategy in China across its business and regulatory activities”, citing his “substantial experience building businesses in China and enhancing connectivity between China and international markets”.

Citic Securities bought Hong Kong-based CLSA in 2013 and Mr Tang later became chairman. Mr Tang’s stint as a senior official at Citic Securities, the securities and investment banking arm of one of China’s largest state-owned conglomerates, followed many years as an official at the country’s ministry of finance.

In March, he was one of several senior executives to leave CLSA amid a culture clash with Citic. Jonathan Slone, CLSA’s longtime chief executive, and Nigel Beattie, chief operating officer, also left the company around the same time. More recently, Christopher Wood, CLSA’s chief strategist, departed to take a job at Jefferies.

People familiar with the matter said in March that Citic has struggled to mesh the Wall Street-oriented culture of CLSA with that of Citic, which ultimately takes its direction from the Chinese government. During his time at CLSA, Mr Tang was viewed as more of a western-style banker, despite his background at state-run Citic and China’s finance ministry.

Credit Suisse has been moving to expand its business in China. In April, it announced it would take majority control of its joint venture securities company, Founder Securities.

The bank said it had agreed with Founder to increase its stake in their joint venture to 51 per cent from 33.3 per cent, a previous limit for non-Chinese companies, via a capital injection of about SFr94m ($94m). The increase is still subject to regulatory approval in China.

That followed similar investments from rivals including UBS, which won approval from regulators to take a controlling stake in its own joint venture in December.

JPMorgan and Nomura have also secured permission to set up majority controlled JVs, while Goldman Sachs and Morgan Stanley have said they are considering similar moves.

Pressure has built on China’s top leadership to open the country’s markets if they expect reciprocal treatment overseas.

Regulators have vowed to speed up the process, and a year ago set out clearer timeframes for allowing banks, securities companies, asset managers and insurers to take full ownership of their local operations.

“We remain committed to enabling the development of wealth and financial markets in China,” said Tidjane Thiam, Credit Suisse chief executive, in a statement.