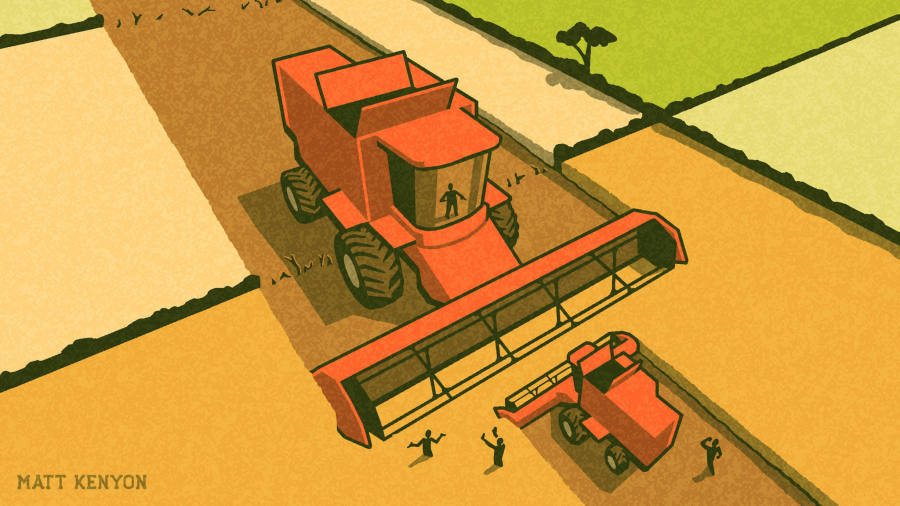 The two major beneficiaries of the global status quo since the 1980s have been big companies, and big countries. US president Donald Trump is (and will continue to be) spending much of his airtime ahead of the 2020 election going after the biggest of them all: China.

However, Democrats are focusing their economic policy attention at home on the issue of corporate monopolies. And in the last couple of weeks, they have come up with a new focus for their complaints about antitrust issues that could help them gain ground in Republican and swing states — agribusiness.

At a recent “heartland forum” in Iowa, five Democratic presidential hopefuls laid out policies to break up “Big Ag” and help small, family farmers. Elizabeth Warren said she would challenge mergers of big agricultural companies, such as German chemicals group Bayer’s 2016 purchase of US seeds group Monsanto. Meanwhile, Amy Klobuchar, the ranking member of the Senate antitrust subcommittee, complained that two seed companies dominate that market, and four railroads — the same number as “on the Monopoly board”— do most food shipping.

Other contenders, including Cory Booker and Bernie Sanders, have introduced measures to level the playing field in farming. Even the centrist think-tank, Center for American Progress, has come out with a report on concentration in agribusiness, pointing out that four transnational companies control the bulk of America’s food supply. That turns Midwestern pig farmers into unlikely mascots for the diminishing power of labour relative to capital, and links their fortunes to those of groups being targeted by the Democrats, such as gig economy workers. Their message is that while Mr Trump may claim China is the problem, America has bigger issues at home.

The markets for corn seed and meat processing are not quite as concentrated as those for mobile phones or search engines, according to data compiled by the Open Markets Institute. But farms are far more emotionally resonant than technology. The beleaguered American farmer has been a powerful political icon for decades — think of Dorothea Lange’s photographs of Dust Bowl migrants, or the 1985 Farm Aid concert featuring artists including Neil Young, Willie Nelson, and my fellow Hoosier John Mellencamp, whose hit song “Rain on the Scarecrow” was inspired by the worst rural economic conditions since the Depression: “The crops we grew last summer weren’t enough to pay the loans; couldn’t buy the seed to plant this spring, and the Farmer’s Bank foreclosed”.

Current conditions are not that bad, but they are not good. In April, a sentiment index based on a survey of 400 agricultural producers across the US, recorded the fourth largest one-month drop since data collection began in October 2015. Worries about trade had increased, the Purdue University/CME Group Ag Economy Barometer, found. Only 28 per cent of respondents felt that the growing dispute between the US and China over soyabeans (and other trade issues) would be resolved by July, down from 45 per cent the previous month. Nearly half wanted the US to rejoin the Trans-Pacific Partnership, the free trade pact that Mr Trump pulled out of shortly after his election.

This presents an opportunity for Democrats to pick up votes in crucial Midwestern swing states. Farming represents only 1.3 per cent of US employment. But nearly one in five rural counties depend on agriculture as a primary income source. In Iowa, the site of the caucuses that are an early test of US presidential candidates, 30 per cent of the economy is linked to agriculture.

What is more, concentration of power in agribusiness has been a bigger and certainly a longer-term problem for American farmers than China. As a few companies gained control of key areas of the food supply chain, spending on research and development fell, input costs rose, and margins for individual farms went down. The CAP report also documents small farmers being forced into opaque contracts and held up by ridiculous rules, such as those forbidding them to repair their machinery without permission from John Deere or other large manufacturers. (That is something Ms Warren wants to overturn.) Those who try to organise unions have faced retaliation.

It all fits into the larger Democratic effort to reset the economic discussion. They are promising to shift from a trickle down, market-knows-best, technocratic approach that limits the use of public policy solutions to one that acknowledges that where outsized power exists, it needs to be curbed with appropriate regulation.

Do not underestimate heartland support for Mr Trump. His approval ratings in Iowa are at the same level as before the trade war. And I have spoken to any number of people willing to take economic pain in order to reset what they see as a false “free” trade paradigm, in which China gets more than it gives.

But I think Democrats are wise to plant their policy seeds in Iowa. The president has done very little to help the Midwest in real terms over the past two years. Quite the opposite: Deutsche Bank calculates that eight of the 10 states most affected by Mr Trump’s tariffs voted for him in the last election.

PUBLISH YOUR ASK FOR A PERSON LOAN