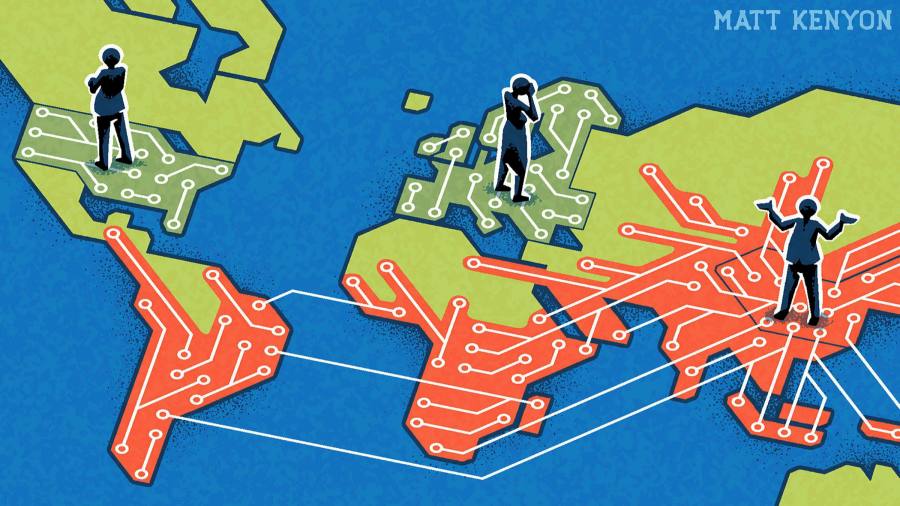 One of the biggest mistakes that Donald Trump has made in recent years, amid a very long list, was trying to go it alone in his technology and trade war with China.

Europeans share many of concerns that the US has about the Chinese surveillance state, and the dangers that it poses to competition, privacy and liberal democracy. The US president could have drawn Europe into an alliance that would have pressured China about old trade grievances as well as the need for a new global framework on how digital business should be governed.

Instead, the Trump administration took on all the world at once, slapping tariffs on enemies and allies alike. The result has been the creation of a tri-polar world in which the US, Europe and China are moving in separate digital directions.

Events last week underscored the fragmentation. A European court struck down the Privacy Shield data sharing agreement between the US and EU, which many companies depend on to transfer safely across borders information such as payroll data. The UK, under pressure from the US, also decided to pull Huawei out of its telecoms networks. EU nations such as Germany are hedging their bets, for now. Even so, a recent Deutsche Bank report estimates that this Sino-US-UK tech cold war will cost $3.5tn over the next five years.

That is not all. Last week, the EU was also defeated in its efforts to force Apple to pay €14.3bn in back taxes to Ireland, which had given the Silicon Valley giant a sweetheart deal for years. Separate national tax regimes are perfectly legal. But they also create a race to the bottom that pits countries against each other and allows companies to shop for the best deal. It’s a technological tragedy of the commons. That is especially so now, when highly indebted governments need more tax revenues to support spending during the pandemic.

The US and Europe are also fighting about how to tax companies that profit from consumer data. As the world shifts towards an ever more intangible economy, the EU wants a regime that targets Big Tech. But the US argues that other multinationals — such as, say, a European handbag maker that also collects personal data from customers — should pay tax in the US too, and has threatened new tariffs against France.

As data is a resource currently mined for free by Big Tech and other multinationals, it is in the interests of both sides to come up with a shared taxation framework. The fact that Mr Trump is still threatening Brussels with various tariffs makes that all but impossible.

There are only two winners so far in this transatlantic war. The first is Big Tech and other digital data miners, which continue to grow in wealth and power. The second is China, which is rolling out 5G telecoms systems globally much faster than either the US or Europe. Beijing has already drawn dozens of emerging market nations into its orbit through its Belt and Road Initiative, other development programmes, and its influential position at the UN’s International Telecommunication Union, which sets global telecoms standards.

And who can blame these countries, given the inability of the US and Europe to create cohesive or long-term standards and strategies about digital governance? Without these, it is impossible to predict — let alone join — the liberal democratic west’s alternative to China’s digital surveillance model.

“It would very much serve US interests to build an alliance with Europe and other countries based on the values that we hold to be important,” says Victoria Espinel, head of the Business Software Alliance, one of the largest tech lobbying groups. True. But that can’t happen until “we” Americans and “we” Europeans agree about what this alternative should be.

If Joe Biden wins the US presidency, the basic dynamics of US-China tech decoupling are unlikely to change. Recent statements by the Democrat party’s presumptive candidate have made clear that he wants more domestic innovation, and safer and shorter supply chains too.

However, unlike Mr Trump, Mr Biden has stressed the need to co-operate with US allies. Creating a new transatlantic trade and technology framework should be top of his agenda. Angela Merkel, German chancellor, and Emmanuel Macron, French president, should meanwhile draw up a list of what they’d like that framework to include.

The EU has unprecedented negotiating power right now. For one, the US cannot compete alone against China in 5G. If Mr Biden becomes the next US president, he will also have to spend some goodwill to fix the damage Mr Trump inflicted on transatlantic relations.

A new deal might include lifting tariffs in exchange for developing a shared framework for the digital economy. This framework should exclude China’s Huawei from 5G systems, and be built around Qualcomm, Nokia and Ericsson instead. It would require a mutual EU-US digital privacy agreement. There would also have to be a digital tax system that allowed nations to capture tax revenues from companies that monetised citizen data. Lastly, an independent bureau should address competition and transparency issues.

Agreeing on all these issues would be very hard. But it would also ensure that the US and Europe are better placed to compete against China in an ever more fragmented digital world.

Fast and simple – online. This really is maybe perhaps not the situation for conventional banking, right?