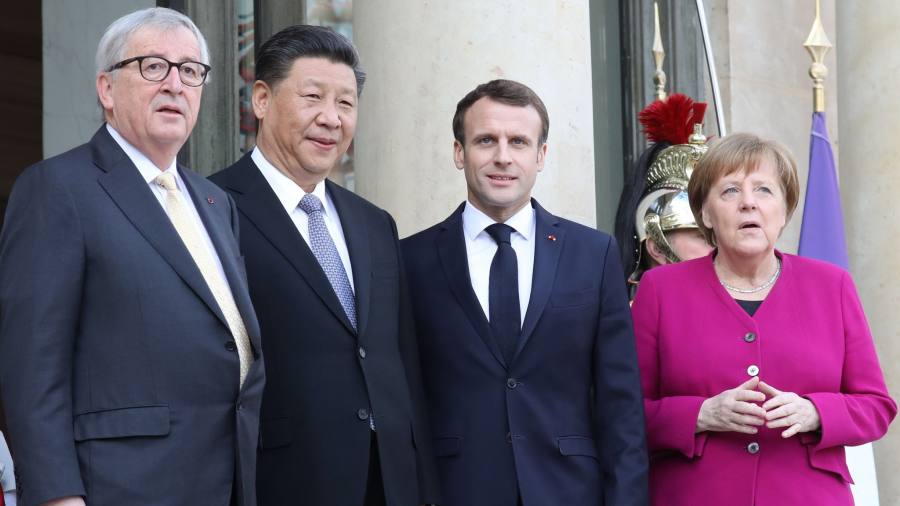 China has been notably successful in creating rifts among EU member states. This year, Italy formally endorsed the Chinese Belt and Road Initiative and Greece joined the “16+1” group of eastern European countries looking to deepen ties with Beijing.

The task for the EU, therefore, is to foster common European interests in a volatile geopolitical landscape. French president Emmanuel Macron made a start in this direction by inviting German chancellor Angela Merkel and European Commission president Jean-Claude Juncker to participate in his meeting with Xi Jinping, the president of China, in Paris in March.

During the past three years what Mr Macron calls a process of “European awakening” has taken place with regard to China. Assumptions about China’s domestic reform trajectory and its international ambitions have changed fundamentally. While EU member states engage with China to varying degrees, few now dispute that its rise is based on an authoritarian party system, massive state intervention in the economy and an uneven playing field for foreign competitors.

The new realism about Beijing in European capitals is clearly expressed in the European Commission’s “strategic outlook” on EU-China relations, published in April. The document describes a multi-faceted relationship with an emerging superpower that in some areas acts as a partner and in others as a competitor or even “systemic rival”.

EU officials and leaders alike increasingly agree that competition with China requires a comprehensive overhaul of European policy. This is especially true in the area of trade. The majority of Chinese investments abroad are made by state-owned or influenced enterprises. The lack of transparency in the financing of such companies makes it impossible to apply World Trade Organization rules on subsidies. The problem is exacerbated by a lack of reciprocity in access to the Chinese market for international investors.

To address this imbalance, Brussels has strengthened its powers to act against subsidies and price dumping. Most importantly, the commission this year introduced an investment screening mechanism to identify threats to national security, including unwanted technology transfers, external political influence or excessive leverage. At the international level, the EU has lobbied against China acquiring the coveted “market economy status” at the WTO. All this has only been possible through an impressive degree of European unity.

The EU maintained its tougher stance at the summit in Brussels in April. Initially, the Chinese delegation seemed unwilling to address a range of European concerns. Eventually, however, the EU’s tougher line led to Chinese concessions on opening its markets to foreign investors and a robust joint statement. It remains to be seen how much follow-up there will be on both sides.

But we must be realistic. There is no guarantee that unity on China can be maintained indefinitely. Some eastern European member states, eager for Chinese investment, have in the past been friendly to Beijing, at the expense of a common EU position. Similarly, Greece, Italy and Portugal are more accommodating towards China than either Paris or Berlin are comfortable with.

Where a shared European position or policy is not achievable, member states with similar views on China should co-ordinate their approaches. For instance, Germany and France share a vision of relations with the Chinese — they not only see the geopolitical threat posed by China’s rise, but also the considerable opportunities it offers. Their prime objective is not to engage in competition or rivalry with Beijing, but to strengthen a partnership on mutually beneficial terms.

This is also a propitious moment for the French and Germans to involve Poland in the process. While Warsaw has a strong interest in co-operation with China, it is also increasingly disillusioned by the failure of much promised Chinese investment to materialise.

Besides encouraging member states to “Europeanise” their China policies, Mr Macron’s joint meeting with Mr Xi in Paris was an important step. Inviting Mr Juncker was a way of linking the intergovernmental level to EU institutions.

Ensuring that EU officials are present at meetings with Chinese delegations is important for monitoring and co-ordination, and would allow the commission to gather information and oversee agreements.

The EU and member states have demonstrated that they can adjust their posture towards China. This success deserves praise. But it is no reason for complacency. There is great deal of work left to do.