Former secretary for food and health Ko Wing-man is satisfied with the way the police handled the recent demonstrations sparked by the extradition law amendments, saying they had shown a high degree of professionalism and self-restraint.

As a veteran, well-respected figure in the medical sector, he also expressed appreciation of the police force’s stand concerning a dispute between its officers and some frontline healthcare workers.

“A few recent incidents in the public healthcare system have made me feel highly unconformable,” said Ko, who is now in private practice.

The police were criticized for trying to obtain information about patients (specifically people who were injured in the protests) in public hospitals. Officers were reportedly not treated politely, with some hospital staff calling them “dogs” and taking away chairs from police working areas in public hospitals.

“It’s the professional ethics of healthcare personnel to maintain the personal privacy of patients, while disclosure of such data shall only be made when it’s highly warranted, such as a patient’s transfer to another hospital or doctor.

“However, it’s sometimes necessary to provide such data to law enforcers if healthcare staff suspect that the injured persons are involved in crimes like family violence, child abuse, rape or robbery. The police are authorized to demand personal data and arrest the suspects, but they should respect the views of healthcare workers in relation to the conditions of patients,” said Ko.

Ko, who was also a top official at the Hospital Authority, said the HA would not care about the political stance of healthcare workers but they should show appropriate respect for police officers and should not insult them because of different political opinions.

“If the reported incidents are true, I would be very disappointed with the healthcare workers, knowing that such behavior should not happen”, he said. However, he said most healthcare workers are highly professional and devoted to the well-being of patients and society as a whole as they had shown during the SARS outbreak in 2003.

Referring to the police’s decision to vacate the 24-hour posts in two public hospitals, Ko said he accepted the explanation that police officers were not working in a friendly atmosphere, but he hoped the withdrawal is just a temporary measure.

In this connection, he said the HA should review the guidelines on working with the police force and also issue guidelines related to protests if such measures do not exist.

Associations of pharmacists have written to the chief executive and the commissioner of police, calling for restraint in the use of tear gas and pepper spray in dispersing protesters.

“I don’t want to comment on why pharmacists have made such a statement,” he said, but noted it’s necessary to consider the reasons for using these weapons.

“The police have strict guidelines on the use of force, and it’s only used when necessary. As can be seen from news coverage, the level of force used by the police is similar to and not higher than that used by overseas policemen,” Ko said.

He also defended police’s decision to evacuate from the LegCo complex on the night of July 1 before radical protestors stormed the building and caused massive destruction, until police officers retuned at midnight to clear up the scene. If the police had stayed at the scene, he said they could have clashed with the protesters and the situation could have gone out of control. 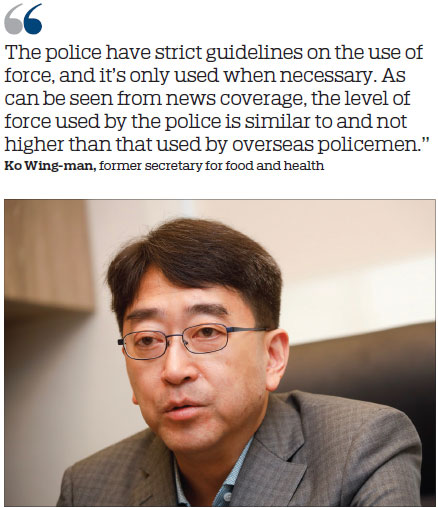