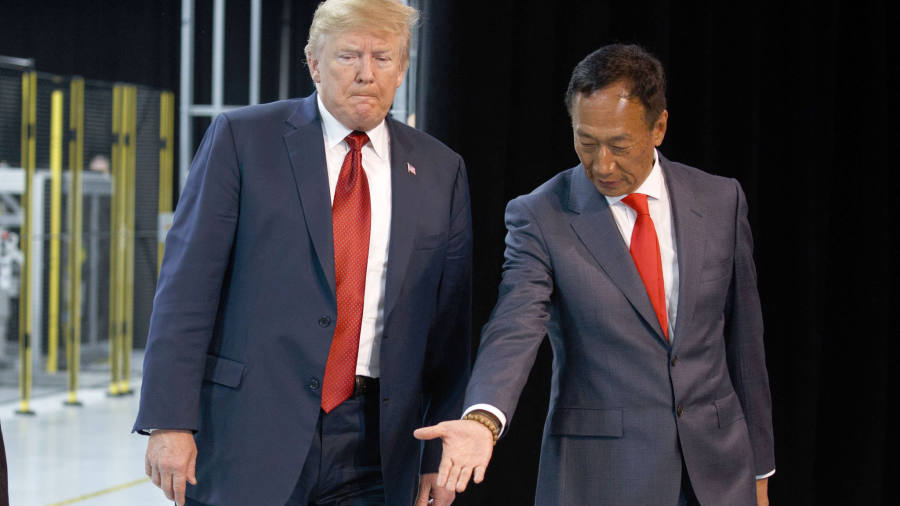 Terry Gou, Taiwan’s richest man, has sought to boost his chances in the island’s upcoming presidential elections by showcasing a meeting this week with US president Donald Trump as evidence of his close relations with the country’s strongest ally.

White House press secretary Sarah Sanders, speaking on Thursday a day after the two men met, described Mr Gou, the founder and chairman of Foxconn, the main assembler of Apple’s iPhone, as “just a great friend” of the US president.

While Mr Gou is not yet officially a candidate, analysts said the encounter with Mr Trump was a tactical masterstroke typical of the businessman. “He is exploiting his status as chairman of Hon Hai for what no other presidential candidate from Taiwan has achieved before nor can achieve after him,” said a person who worked for Mr Gou for several years. Hon Hai is the holding company of Foxconn.

While the Taiwan presidential election is still nine months away and Mr Gou faces fierce competition to win the nomination of his party, the Kuomintang, Taiwan’s largest opposition party, the Trump meeting throws a spotlight on how his bid could break the mould of Taiwan policy.

Mr Gou and Mr Trump “did not discuss support for his campaign in Taiwan”, Ms Sanders said, but instead plans by Mr Gou to invest in a plant in Wisconsin, which the US president has held up as evidence he is fulfilling his promises to revitalise the country’s rust belt.

During the meeting, the Taiwanese tycoon said he had invited Mr Trump to attend the opening of Foxconn’s planned factory in Wisconsin a year from now, and the US president had agreed to come.

“Imagine he wins the election and Trump really comes to the [Wisconsin] plant opening — then we have a meeting between a Taiwanese and US president, the impossible could happen!” said the person who worked for Mr Gou.

Mr Gou has said he will step back from daily operations at Foxconn in the near future, but he remains in charge and directly involved in the company’s Wisconsin project. Although Foxconn has fallen behind on its construction and hiring timetable, Mr Gou has pledged to stick to his promise of building a liquid crystal display factory and employing 13,000 people there.

The Foxconn chief’s presidential bid had triggered concerns that if elected, he might compromise Taiwan’s national interests because of his company’s vast interests in China. Beijing claims the island as its territory and has threatened to invade if Taiwan resists unification indefinitely.

But his decision to kick the primaries race off with a White House visit suggests he might use the contacts he has built in other countries as an asset.

Mr Gou said that Mr Trump had told him being president was “a tough job”. In a lengthy Facebook post adorned with the slogan “Make our nations great again”, Mr Gou said he had given Mr Trump a cap emblazoned with the Republic of China flag — normally a taboo for US government officials.

Political analysts, however, believe that a possible meeting between Mr Gou if he becomes president and Mr Trump remains extremely unlikely.

Mr Trump triggered shockwaves in the US’s relations with China in December 2016 when he took a call from Taiwan’s president Tsai Ing-wen to congratulate him on his election victory — unprecedented since Washington dropped Taipei for Beijing.

He has since, following the advice of the administration’s China experts, backed away from challenging such basic taboos.