Gibraltar strives to use tech to support Bay Area

Stakeholders in the Guangdong-Hong Kong-Macao Greater Bay Area should pursue deeper collaboration with Gibraltar and each other to boost Hong Kong’s aspirations to become a global technology and innovation hub.

Gibraltar, a British overseas territory on the southern tip of the Iberian Peninsula, has a land area of 6.7 square kilometers and shares its northern border with Spain.

Albert Isola, Gibraltar’s commerce minister, told China Daily that the European territory could provide its regulatory expertise in blockchain technology to complement Hong Kong’s vision as a global technology and innovation hub in the Bay Area.

The commerce chief started his business trip in the Chinese mainland and Hong Kong in mid-June, meeting with entrepreneurs and regulators of the financial services industry across the border to promote Gibraltar in the technology field in general, and blockchain technology in particular.

Blockchain, a decentralized list of linked records that can be applied in different segments of the economy, is widely applied in financial services, healthcare, education and sciences. Many governments apply blockchain technology in the operation of their internal systems.

“Hong Kong is one of the leading areas of using advanced technologies. We can complement Hong Kong in the technology field by providing the European legal framework for companies to access those markets,” Isola told China Daily in an interview. Business firms in Gibraltar have already launched blockchain services worldwide, the commerce chief said.

“We are not competing with Hong Kong. We are working with the city to provide Hong Kong firms solutions to access the European client base from the jurisdiction, where blockchain is regulated. This is very important,” Isola added.

Hong Kong is vying to be the global technology and innovation hub under the central government’s Bay Area blueprint. Under the macroeconomic road map, the city is striving to develop innovation and technology industries and high-end services to complement the manufacturing base on the east bank of the Pearl River Delta, with Shenzhen and Dongguan as its core.

In addition, the Bay Area backdrop also stresses the importance of Hong Kong as an international financial services center.

“Hong Kong’s potential as a financial center in the Bay Area is already there,” Isola said, adding that both parties will seek cooperation in different segments of the financial services industry.

Financial services such as captive insurance and fund management, e-commerce, tourism, and shipping services are the four major pillars of Gibraltar’s economy. 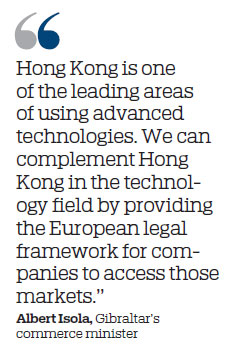 As Gibraltar is a major offshore captive insurance services provider, it makes a lot of sense for Gibraltar to cooperate with Hong Kong when the latter is also aspiring to be a regional captive-insurance hub. The insurance industry has widely applied blockchain technology, and industry players are looking at how to use the technology to improve their services, Isola said.

Promoting the use of fund management vehicles in Gibraltar is another work priority in the business trip, Isola said.

Apart from regulator-entrepreneur collaboration, the private sector is also ramping up financial support for the Bay Area’s technology push.

HSBC Commercial Banking announced in mid-June the launch of the GBA+Technology Fund, which will provide $880 million of senior debt financing to high-growth, early-stage companies, especially those in the Bay Area. Enterprises in sectors such as e-commerce, financial technology, robotics, biotechnology and healthcare technology will be eligible for the fund.

According to HSBC figures, over 45,000 high-technology companies are currently operating in Guangdong province, up 37 percent from the same period last year.

Mergers and acquisitions, fundraising, wealth management, digitalization and policies in the Bay Area are all significant drivers for the future growth of the banking industry in the region, the report added.

“Huge demand from infrastructure funding, an increasing need for asset management, offshore and onshore business development, and the two-wheel drive of ‘Technology + Finance’ have brought crucial development opportunities to the banking industry in the Bay Area,” said Ivan Li, head of financial services for southern China at KPMG China.

In terms of innovation, commercial banks should be proactively engaging in this transformation strategy and driving the digitalization of their physical branches, strengthening their operating model and service process flow, and in turn enhancing the core competencies of banks.

The Bay Area blueprint is the central government’s plan to transform the city cluster area – comprising nine mainland cities in Guangdong province as well as Hong Kong and Macao – into a global innovation and technology hub and modern industrial system through facilitating the free flow of people, capital, goods and information within the region.

With an area of 56,000 square kilometers, the Bay Area is endowed with the most intense cluster of airports and ports in the world. It is an enormous market, with a population of 71 million and a GDP of $1.6 trillion at the end of 2018, equivalent to 12 percent of the country’s GDP. 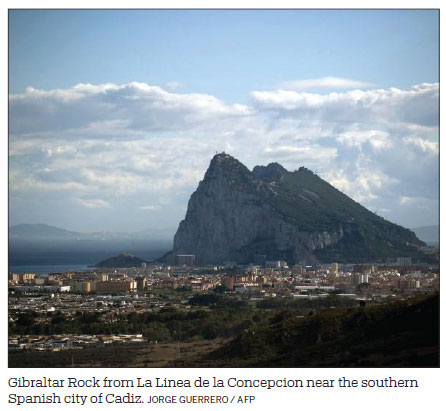