Global equities softened on Monday, but remained on track for a record monthly gain powered by Covid-19 vaccine breakthroughs.

Europe’s benchmark Stoxx 600 index was down 0.1 per cent in early trading, while London’s FTSE 100 fell 0.2 per cent. MSCI’s index of developed and emerging market equities lost 0.3 per cent.

But that comes after weeks of gains. Investor sentiment has been lifted in November by optimism following Joe Biden’s victory in the US presidential election and a string of positive announcements regarding Covid-19 vaccines. The Stoxx has rallied more than 14 per cent this month, while MSCI’s global stocks index has risen nearly 13 per cent — putting both on course for a monthly record.

At the same time, haven assets have fallen out of favour. Gold fell another 0.7 per cent on Monday to $1,776 per troy ounce. The metal has lost more than 5 per cent of its value in November, heading for its worst month in four years. The dollar slipped a further 0.1 per cent against a basket of other currencies, taking it to its lowest point since April 2018.

The caution on Monday followed the release of Chinese industrial production data, which showed the recovery in the world’s second-largest economy remained patchy. The official manufacturing purchasing managers’ index showed output from China’s factories grew at its quickest rate since 2017, while a gauge of services rose to an eight-year high.

But Rabobank’s Raphie Hayat pointed out that the recovery in Chinese industry was “uneven” and continued to be affected by coronavirus shutdowns and restrictions in the rest of the world.

“The production of ‘stay at home’ items such as TVs and smartphones is doing much better than ‘working from the office’ items such as copying machines,” he said. He added that China’s services sector was not doing as well as industrial production, indicating that consumer demand was “lagging behind”.

Shares in Chinese oil group Cnooc and chipmaker SMIC fell as much as 9.3 and 3.4 per cent respectively after Reuters reported that the two state-run companies would be added to a US investment blacklist for companies with alleged ties to China’s military. 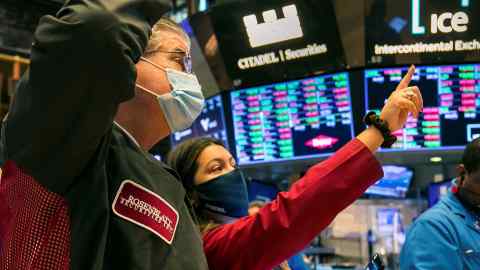 Meanwhile, futures markets pointed to a pullback for US stocks when trading begins on Wall Street later on Monday, with the S&P 500 expected to edge down 0.3 per cent.

In commodities, crude dropped after the Opec+ group of oil-producing nations failed to agree on whether to delay a planned supply increase ahead of an important meeting on Monday. Brent crude, the international benchmark, fell 2 per cent to $47.16 a barrel.