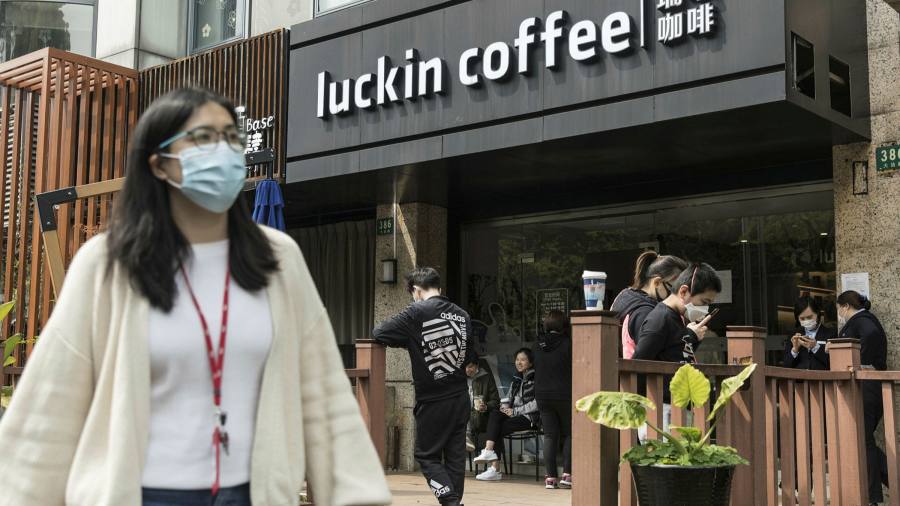 Goldman Sachs said it would seize and sell Luckin Coffee shares from the chairman of the scandal-hit chain after he defaulted on the terms of a $518m margin loan.

Luckin went public in New York last year with a lofty goal of displacing Starbucks in China but announced last week that its revenues had been manipulated, sending its shares down 80 per cent since then.

Goldman on Monday said it was seizing the shares as collateral on the margin loan facility to Luckin chairman Lu Zhengyao. It would then convert them into American depositary shares and sell them to recoup losses on behalf of a syndicate of lenders.

After the value of shares and ADS fell sharply again on Monday, the stake claimed by Goldman would be worth about $350m, implying a loss of about $168m.

An internal investigation into the Chinese group revealed last week that it had fabricated Rmb2.2bn ($310m) in transactions. The collapse in the share price that followed the revelation wiped out the value of the collateral backing the loan, leading the banks to call in the facility.

Goldman Sachs is the disposal agent for sale of the 73m in shares. The bank declined to comment further on the matter.

A full sale of the shares would not change Mr Lu’s voting rights in the company, Goldman said in its statement. However, the sale would significantly decrease the voting rights of Luckin chief executive Qian Zhiya, whose shares in the company were also pledged in the arrangement.

Mr Lu, who also goes by the English name Charles, founded the company in 2017 and rapidly grew the coffee chain to more than 4,000 stores by the end of 2019. He could not be reached for comment on Monday.

The expansion was fuelled by backing from a list of top private equity groups, including BlackRock, Singapore’s GIC and Centurium Capital Partners, an investment group founded by former Warburg Pincus China head David Li. Louis Dreyfus, one of the world’s biggest traders of orange juice and coffee, was also a backer.

The disclosure from the internal probe has cast doubt over the future of the company but Luckin on Sunday said its China operations were continuing as normal. China’s securities watchdog has said it will investigate the company.

Concerns over Luckin’s accounting were raised earlier this year when US short seller Muddy Waters made public an anonymous report pointing to possible fraudulent behaviour at the company.

The report stated that an anonymous research group had a team of more than 1,500 people monitoring the number of customers going to some of its outlets and found the company was overstating its business. At the time, Luckin denied the allegations, describing them as “misleading and false”.

Borrowing With Peer-to-Peer Loans: How It Functions

As of 2020, you will find 13 states through the entire USA that completely prohibit payday lending.