Hong Kong’s national legislators and policy advisers were called on to back the Hong Kong Special Administrative Region Government’s proposed amendments to the extradition laws on Friday.

Wang Zhimin, director of the Liaison Office of the Central People’s Government in the HKSAR, called out to Hong Kong deputies to the National People’s Congress, the country’s top legislature, and members of the Chinese People’s Political Consultative Conference, the nation’s political advisory body, during a meeting.

Wang explained that the amendments would help plug legal loopholes in Hong Kong over the surrender of fugitive offenders, Tam recalled.

Wang also said national legislators and policy advisers should support the SAR government in accordance with law, he noted.

The remarks came days after the liaison office and the Hong Kong and Macao Affairs Office of the State Council, respectively, voiced their support for the amendments.

During the 100-minute meeting, Wang told some 240 attendees that there are some “false accusations” about the bill in Hong Kong. These were being done to provoke antagonism in society, Wang said.

Hence, Wang called on them to take the initiative to help the SAR government explain details of the amendments to the public, Tam added. 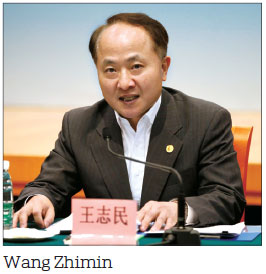 The proposed revisions will allow Hong Kong to surrender fugitive offenders to jurisdictions with which it currently does not have rendition arrangements. These include Taiwan, Macao, and the Chinese mainland.

However, opposition lawmakers have been obstructing the election of a chairperson for the bills committee by filibustering.

Because of the current deadlock in LegCo, Tam said dissolving the bills committee and tabling the bill straight to a full-member LegCo Council meeting is a possible solution for resuming the legislative process – although this is a rare practice. After all, it conforms with LegCo’s Rules of Procedure and lawmakers can also propose amendments to the bill, Tam said.

Starry Lee Wai-king, chairperson of the LegCo House Committee, said the committee would consider suspending operations of the bills committee.

A dedicated bills committee conducts scrutiny of a bill, while sparing time for the weekly LegCo meeting on Wednesdays, where plenary lawmakers meet for motion debates and questioning government officials, and the government table bills.