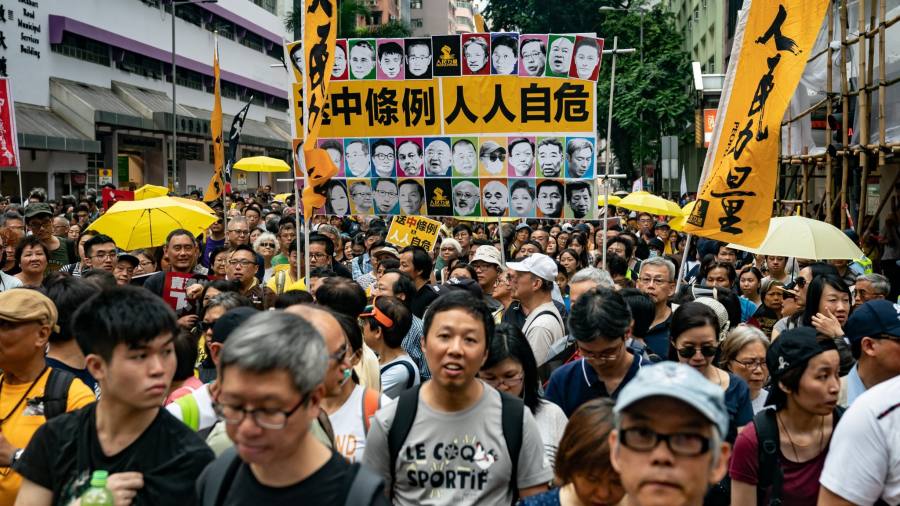 An amendment to Hong Kong’s extradition law to allow people to be sent to mainland China to stand trial has sparked uproar, highlighting concerns about the loss of freedoms in the international business hub as Beijing tightens its control.

After protests last weekend, which were the biggest in Hong Kong for five years, campaigners have vowed to step up street demonstrations to prevent the city’s government from meeting its aim of passing the amendment by July.

“If the government refuses to withdraw the [extradition] proposal, we will have no choice but to ramp up our actions and surround the Legislative Council,” said Figo Chan, a representative from the Civil Human Rights Front, the organiser of the rally.

The proposal comes amid concerns authorities are increasing curbs on what are known as Hong Kong’s “core values” — the freedoms promised to the semi-autonomous Chinese city when it was handed over to China in 1997.

The government has imprisoned activists and banned a political party and elected lawmakers have been ousted from the Legislative Council, the city’s representative body. Last week, another four leaders of the Umbrella Protest Movement, the pro-democracy mass demonstrations that shut down parts of the city in 2014, were sentenced to some of the longest prison terms of any participants in the movement.

Nobody who comes into Hong Kong will feel completely safe

Under the changes to the extradition law, the government wants to amend legislation that has long prevented the transfer of fugitives from Hong Kong to either mainland China, Macau or Taiwan. The government argues the amendment would plug legal loopholes highlighted by a murder case in Taiwan involving Hong Kong residents. Pro-Beijing lawmakers say these gaps have potentially made Hong Kong a “paradise for fugitives” accused of serious crimes.

“The government will try very hard to solve the dispute and allow the amendment to pass,” Hong Kong’s chief executive Carrie Lam said this week.

But critics fear the law could be misused by Beijing to detain for political reasons people who are living in Hong Kong or passing through the territory, one of Asia’s main hubs for business travellers. Foreign governments, especially those with existing extradition agreements with Hong Kong, have expressed concerns over the proposed amendment, including the US, the UK and the EU.

“Nobody who comes into Hong Kong will feel completely safe,” said the founder of Hong Kong’s Democratic Party, Martin Lee.

He compared last weekend’s protests with those in 2003 against the Article 23 bill, a proposed law to criminalise treason and subversion that was seen as draconian, when about 500,000 people took to the streets. Those demonstrations resulted in the government scrapping the plan and the resignation of senior officials.

Organisers estimated more than 130,000 people participated in Sunday’s rally, while police put the number at 22,800.

“This is more severe than Article 23,” he said, “At least [with Article 23] the trial would have been conducted in Hong Kong [rather than in China] and I have confidence in Hong Kong’s legal system.”

Research has repeatedly shown freedom is a “core value” of Hong Kong people, said Dixon Sing, a political-science professor at Hong Kong University of Science and Technology. The perceived threat to this value had triggered the large-scale protests on Sunday.

Regina Ip, a pro-establishment lawmaker, said people doing business in China would not be affected because “if they are really afraid of the legal system in the mainland, they will not do any business there”.

But a joint statement by news organisations alleged journalists have been charged on criminal offences including drug possession and bribery by Chinese authorities to obstruct reporting about activists or corruption.

Lam Wing-kee, a Hong Kong bookseller who marketed gossipy titles about Chinese leaders, fled to Taiwan last week and said he planned to seek residence there. He was abducted by Chinese security agents and held incommunicado for eight months before resurfacing in Hong Kong in 2016. Taiwan has expressed concerns about Hong Kong’s amendment to the extradition law.

“If the amendment is passed there would be no protection of my personal freedom,” Mr Lam told the Financial Times before he left the city. He said the Chinese police had issued a wanted notice for him.

The most effective way to fight the extradition law and an authoritarian government were street protests, said Avery Ng, the chairman of the League of Social Democrats, a pro-democracy party in Hong Kong and one of the protest’s organisers.

For Rachel Cheung, a primary school tutor who marched on Sunday dressed in a yellow T-shirt and holding a yellow umbrella, the evolution of the school curriculum has been a source of despair.

Her students in the predominantly Cantonese-speaking territory of Hong Kong were being told to speak Mandarin Chinese and, rather than learning important skills such as how to write well, were being taught to obey the government, Ms Cheung said.

“I was born in Hong Kong and I can see how much it has changed since the handover,” she said. “We are marching for the future of Hong Kong, for the next generation.”