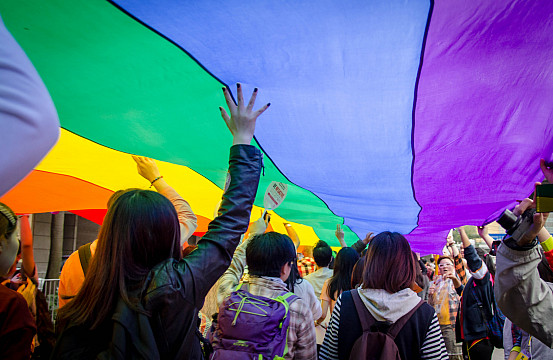 “It follows therefore that the ‘prevailing views of the community on marriage’ … even if this can confidently be gauged in the first place, are simply not relevant to a consideration of the justification exercise,” the ruling said.

Although same-sex marriage is not recognized in Hong Kong, the judgment appears to move the territory further in that direction. Last year, the Court of Final Appeal ruled that the same-sex partner of a British expatriate married abroad was entitled to the same visa treatment as a heterosexual partner under immigration law.

Angus Leung, a senior immigration officer who brought the case on behalf of himself and his partner, Scott Adams, said the ruling was the culmination of a stressful four-year process.

“We understand that it is just a small step for the equality in Hong Kong,” Leung told reporters as he and Adams held hands outside the courthouse. “We think that as a small citizen, we shouldn’t be going through such a process to fight for such a basic family right.”

Leung urged the government to rectify discriminatory policies and legislation so that other couples wouldn’t have to undergo the same legal process.

Tam also called on the government to review its laws, policies and practices to end all discrimination on the basis of sexual orientation, gender identity, and intersex status, saying, “No one should experience discrimination because of who they are or who they love.”

It isn’t clear what effect the ruling might have on private businesses and organizations, although some already offer benefits to same-sex partners as they compete for top talent in finance, marketing, and other fields for which Hong Kong is famous. In another sign of acceptance, the city of 7.4 million people is also preparing to host the 2022 Gay Games.

Last month, Taiwan became the first place in Asia to allow same-sex marriage when its legislature approved a bill codifying the legal rights for such couples. The vote came after a 2017 court decision that found same-sex marriage to be constitutionally required, and gave the legislature two years to change Taiwan’s laws accordingly. Hundreds of Taiwan’s same-sex couples rushed to get married on May 24 this year, the first day the new law took effect.

In mainland China, the Communist Party-controlled government has ruled out the possibility of same-sex marriage without ever hearing legal arguments on the matter and strictly limits the activities of gay rights organizations. While social acceptance of LGBT people and rights is growing, the government clamps down on gay rights advocates with the same heavy hand it uses to quell most forms of political activism. The Chinese government has accused LGBT event organizers of “colluding with foreign powers” and actively discouraged Chinese citizens from attending. Last year, two Chinese women seeking to join a gay pride event in Beijing were physically assaulted by security guards, apparently because they were wearing rainbow flag badges.

However, Hong Kong, a former British colony that returned to Chinese sovereignty in 1997, maintains its own Western-style legal system distinct from China’s heavily politicized courts. With its large semi-permanent foreign population, the city is also far more socially liberal than the mainland.

Still, Hong Kong’s High Court earlier this year refused to allow three transgender men to be recognized as males on their official identity cards because they have not undergone full sex-change operations.

By Katie Tam for The Associated Press with additional reporting by The Diplomat.