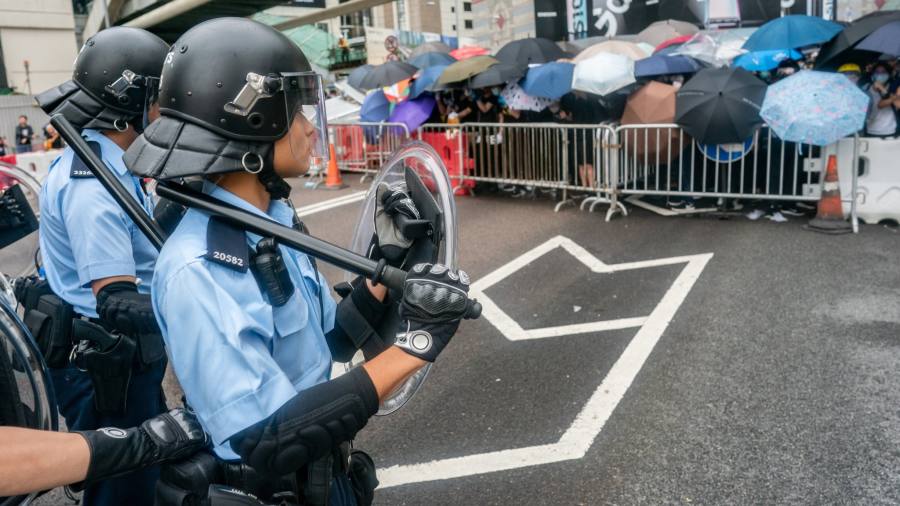 Hong Kong was forced to postpone debate of a controversial extradition bill on Wednesday morning after thousands of protesters gathered for the second time in days to oppose a law critics see as a fundamental threat to the territory’s civic freedoms and rule of law.

The government did not set a new time for the resumption of debate on the bill, which it says is needed to fill a legal loophole but which opponents say will allow China to bypass the territory’s legal safeguards and extradite political opponents or others from the city on potentially trumped up charges.

Carrie Lam, Hong Kong’s leader, has vowed to push ahead with the bill, ignoring a protest against the law on Sunday that was Hong Kong’s largest since its handover in 1997 to China from Britain, with an estimated 1m taking to the streets.

“Don’t underestimate the anger among average people. The young people are . . . the front line but actually there are so many people out there — middle class, working class — who are very, very angry,” said Charles Mok, a former IT executive who represents the sector in Hong Kong’s partially democratic Legislative Council.

“They are angry because the government isn’t listening to them.”

The “one country, two systems” framework agreed at Hong Kong’s handover was meant to guarantee the territory’s civic freedoms and legal system — unique in China — for 50 years. But critics argue these have gradually been eroded over the past five years, starting with a crackdown on pro-democracy Umbrella Movement protests in 2014.

The extradition law, which the government says is aimed at ensuring suspects accused of serious crimes do not use Hong Kong as a haven, is seen by critics as a fundamental threat to these freedoms. The territory does not currently have an extradition agreement with China.

Hong Kong’s Hang Seng stock index dropped 1.2 per cent in morning trade on the protests, in spite of the announcement that the debate in the legislature had been delayed.

“It’s not a success,” said a 30-year-old protester in reaction to the news of the delay, adding that the government could reschedule the debate for any time.

The demonstrators, mostly aged between 15 and 30, were wearing face masks for fear of prosecution. Their occupation of major roads prevented some pro-Beijing lawmakers from gaining access to the central government offices for the debate.

The government issued a statement early on Wednesday advising staff not to drive into work and to be mindful of their safety.

Drivers said they had been stuck in traffic for hours, although most added that they sympathised with the protesters.

The city’s police were out in force in anticipation of the crowds after students and small businesses said they would strike on Wednesday with calls to “picnic” in a park at the central government offices in opposition to the bill which would allow individuals to be sent to China to stand trial.

“The government wants this bill to pass as soon as possible to prevent further escalation of the protests which have already been very large,” said Samson Yuen, a political scientist at Lingnan University in Hong Kong.

The attempt to rush through the bill “really breaks the deliberative tradition of legislation in Hong Kong because even for any bill not as important as this one, it usually takes weeks or months to debate”, he said.

A 30-year-old swimming coach, who identified himself only as Ben, wearing safety googles and a mask said “I came out for the next generation . . . to keep Hong Kong safe for them”.

Mr Mok, of Legco, said: “It’s really not about the bill any more. If you can shove it down my throat like this time, what else will you do?”

The US state department expressed its “grave concern” over the bill on Monday, saying the proposal put Hong Kong’s special status at risk.

US House speaker Nancy Pelosi issued a statement late on Tuesday saying the proposed legislation “imperils the safety of the 85,000 Americans living in Hong Kong” and that she looked forward to a the introduction of a bipartisan “Hong Kong Human Rights and Democracy Act” in the coming days.