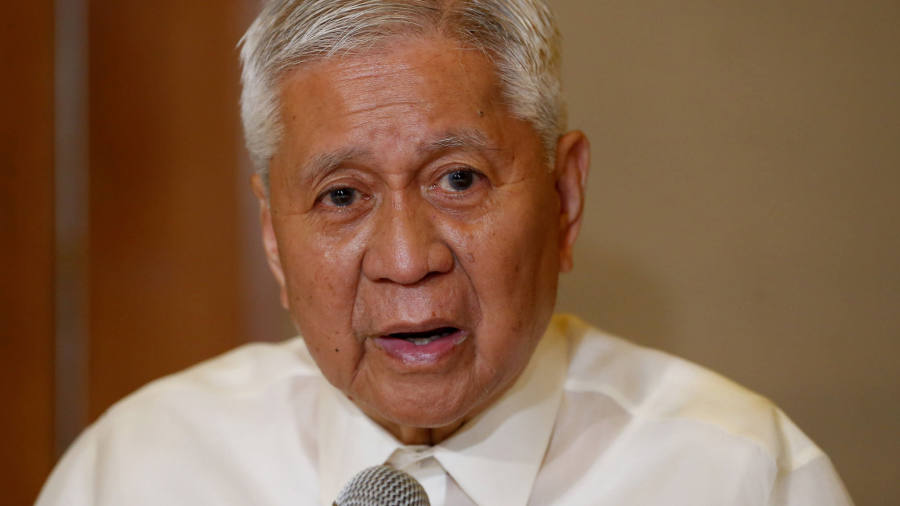 A former Philippine top diplomat who accused Chinese leader Xi Jinping of crimes against humanity was barred from attending a business meeting in Hong Kong on Friday, in an incident that will add to concerns over the freedoms of foreigners to do business in the territory if their views do not align with China’s.

Albert del Rosario had flown to Hong Kong to attend a board meeting of First Pacific, the investment management and holding company, where he serves as a non-executive director.

“Our CEO Manny Pangilinan just told us that Albert was denied entry to Hong Kong and is flying back this afternoon,” First Pacific told the Financial Times in an emailed comment early on Friday afternoon.

Mr del Rosario told the Associated Press that he was held for about six hours at an airport immigration lounge, then barred from entering Hong Kong on Friday despite holding a diplomatic passport. He said Hong Kong authorities said the refusal to allow him to enter was due to an “unspecified case”.

Hong Kong is a special administrative region of China which is supposed to enjoy autonomy under the “one country, two systems” agreement made at its handover from British colonial rule in 1997.

The 79-year-old former secretary of foreign affairs in March filed a complaint against Mr Xi and other Chinese officials at the International Criminal Court with Conchita Carpio-Morales, a former Philippine ombudsman, and a group of Filipino fishermen over China’s activities in the South China Sea, alleging Beijing should be held accountable for crimes against humanity.

China has an unresolved maritime dispute with the Philippines, and the ICC complaint claimed that China’s building of artificial islands and other activities were harming the environment and endangering fishermen’s livelihoods.

China is not a member of the ICC, and the Philippines said it was withdrawing from the UN court last year after it opened a preliminary probe into thousands of deaths during the country’s drug war.

Ms Carpio-Morales was denied entry to Hong Kong when she tried to visit last month.

Hong Kong’s refusal of entry to Mr del Rosario comes at a time of heightened tensions between China and the Philippines after the sinking of a Philippine fishing boat on June 9 by a Chinese vessel that pitched 22 sailors into the sea.

Last week Mr del Rosario called for China to be held responsible for the sinking of the vessel.

“The questioning of Carpio last month and del Rosario today suggests a pattern of harassment of Beijing’s critics in the Philippines at Hong Kong International Airport,” said Aaron Connelly, a research fellow at the Singapore office of the London-based International Institute for Strategic Studies.

“That’s a big deal for elite Filipinos in government and business, for whom Hong Kong has been a major offshore business hub and a nearby retreat, similar to Singapore for Indonesians.”

However, Mr Connelly added that the pattern had less to do with the fishing boat sinking than “a much broader, longer-term attempt to chill criticism of China by Philippine elites”.

“If I were del Rosario I would not have gone to Hong Kong because I’m sure I would be going through the same ordeal the former ombudsman did,” Salvador Panelo, who also serves as Mr Duterte’s chief legal counsel, said.

“Permission or denial to enter Chinese territory is entirely China’s sovereign right,” Mr Lu said, adding that such matters were legally addressed by the Chinese central government and the government of the Hong Kong special administrative region.

Mr del Rosario served as the Philippines’ foreign secretary in 2011-2016, under former president Benigno Aquino III, a member of the liberal political camp swept aside in an election three years ago by Mr Duterte, who has pivoted the country towards China.