Hong Kong grapples with its own, new Pandora’s Box

The myths of ancient Greece are so potent that thousands of years after they first circulated, they are still known today and are familiar even to Hong Kong schoolchildren. Such is the story of the Pandora’s Box, and the girl who couldn’t resist the temptation of opening it despite expressing instructions not to do so, only to find that she had unleashed upon the world every kind of trouble and unhappiness. It takes little imagination to believe that this is what has happened in Hong Kong.

Yuen Long in the northwest New Territories was, not so long ago, best known to Hong Kong people as the home of “wife cakes”, a favorite delicacy. In fact, it is a fascinating area with more complexities than that. Indigenous residents are proudly aware of their long history preserved in ancestral halls that are hundreds of years old, as well as ancient walled villages. This was the only part of Hong Kong that militarily resisted British colonization in a brief war in which the villagers were inevitably outgunned. Even so, their traditions were more important to them than the artificial new line dividing the Chinese mainland from Hong Kong and the chaos of World War II, the Japanese occupation, and the consequent lawlessness that allowed this area to re-establish its own way of doing things. More recently, its rural character was profoundly affected by the development of new towns and the Small House Policy, both of which added to the wealth of the district and of individuals. 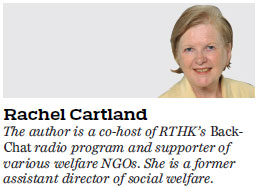 The characteristics of clannishness and suspicion of outsiders have, however, not been obliterated. It all makes for a powerful brew of a very special culture, some of which was captured in the local film Overheard 3. Equally interesting in a different way is the Fujian settlement at the eastern end of Hong Kong Island. In older times, there were more of these clusters of people from the same part of China, naturally gravitating toward others who spoke the same dialect. This particularly cohesive group successfully lobbied for old-age welfare benefits to be accessible to them even after a move back to their home province on the mainland, so strong is their identification with Fujian. These two groups, in very different corners of Hong Kong, used to be simply part of the rich mosaic of our community. Now, since the Pandora’s Box was opened by the confrontations over the extradition proposals, they stand accused of aggression toward the demonstrators.

The fact of the matter is that human beings love violence. If we were honest, most of us would have to admit that we like to counter life’s frustrations with punches, swearing and worse. Much of what we consider civilized society is an attempt to put a lid on that particular variant of the Pandora’s Box, constraining ourselves to accept the referee’s decision in all sorts of activities and restraining the powerful from lashing out just because they can. What happens when those restraints are removed? We have seen the effects over the last couple of months: plenty of injuries; a measurable rise in mental distress, even implicated in suicides; the trashing of property; and estrangement and alienation between family members and different groups. Anarchy is a bit like getting drunk: The first few drafts are delicious, but the hangover and the realization of the damage that has been done are horrible. It is also a trap. Once begun, with two sides pitched against each other, it becomes almost impossible to step down, only much easier, even if in reality more painful, to continue a cycle of retaliation until all is laid waste.

If Hong Kong schoolchildren know the story of Pandora’s Box, then they also know how it ended: When everything seemed completely disastrous, a tiny creature that had been overlooked emerged from the maligned box. This was Hope. Hong Kong has always been rather a hopeful place, its population’s roots including many who were willing to take chances and run risks to make a better life for themselves and their families. Even now, groups and individuals are actively talking and thinking about how to find a constructive way forward and away from the current crisis.

One of the most lauded historical events of the 20th century was the peaceful end of apartheid in South Africa, achieved without violence despite the years of hatred and oppression that had gone before. Nelson Mandela was acclaimed as a hero for his part, but the role of F.W. de Klerk, the then-president of South Africa, is sometimes given insufficient credit. An establishment figure all his life, he had to demonstrate graciousness and wisdom to negotiate with a former enemy in order to achieve the greater good for his country. Where are Hong Kong’s figures of comparable stature who will allow us to believe in Hope now?