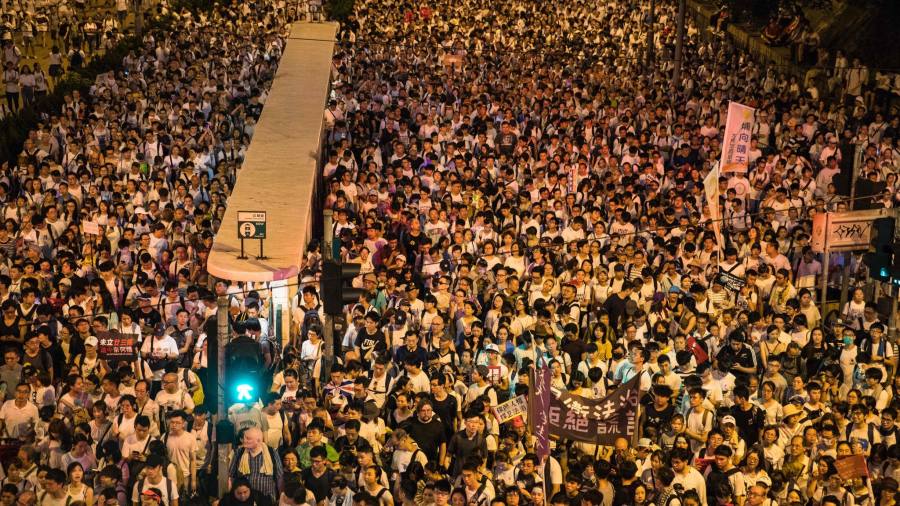 Hong Kong’s leader said she would press ahead with a controversial extradition bill that prompted hundreds of thousands of protesters fill the streets on Sunday over fears it would allow China to seize suspects in the territory.

Carrie Lam, chief executive, on Monday dismissed suggestions that she should step down and said the second reading of the bill would go ahead on Wednesday. She said the bill was designed to expand existing extradition agreements and denied it was a result of instructions from Beijing.

“This bill is not initiated by the central people’s government,” Mrs Lam said. “I have not received any instruction or mandate from Beijing to do this bill. We were doing it and we are still doing it out of our clear conscience for Hong Kong and our commitment to Hong Kong.”

Organisers estimated that 1m people joined Sunday’s march along a major thoroughfare on Sunday, while police said 240,000 took part. The demonstrators, who were mostly dressed in white and carried placards saying “No China extradition”, were still arriving at the end of the march almost eight hours after it began.

The bill, which if passed would allow China to request the extradition of anyone living or passing through the territory if suspected of a criminal offence, has been condemned by business groups and foreign governments.

Ms Lam said the bill plugs existing loopholes and that the government had drawn up additional human rights safeguards following feedback from the public.

“There is no question of us ignoring views in society,” she said. “But Hong Kong has to move on. There are severe deficiencies and gaps in our existing system to deal with cross-border and transnational crimes” she said.

Ms Lam acknowledged that the protest had been “generally peaceful and orderly” but said there had been violence at the end of the march resulting in injuries among several police and at least one journalist.