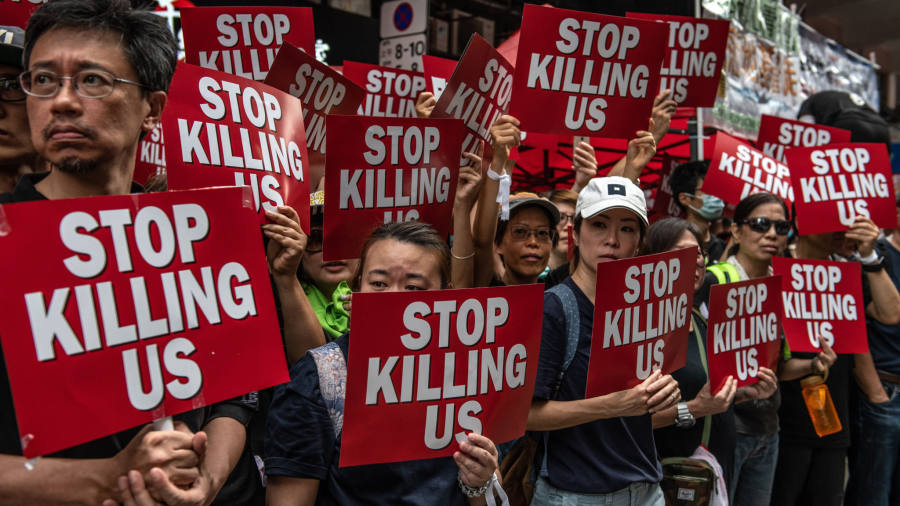 The courage of the people of Hong Kong has been vindicated. After up to one in seven of the population took part in protests against an ill-considered extradition bill — with many on Wednesday confronting attempts to disperse them with tear gas and rubber bullets — the authorities have backed down. Carrie Lam, Hong Kong’s chief executive, was wise to suspend the bill, but should scrap it entirely. She, and the Beijing government, should also be mindful in future of the resolve Hong Kong citizens have demonstrated to defend the rights enshrined in the agreement that handed the former British colony to China in 1997.

The bill was manifestly flawed and open to abuse. It would have allowed, for the first time, residents and even people passing through Hong Kong to be extradited to mainland China if suspected of serious crimes. That would have extended the reach of the Chinese judicial system, where the Communist party controls the courts, into Hong Kong, which has until now preserved an independent judiciary. Dissidents could have been rendered to the mainland on trumped-up charges.

The bill had severe implications, too, for Hong Kong’s role as a financial centre. City business people in disputes with mainland companies could have found themselves hauled before biddable Chinese courts. The legal certainty that attracts companies to use Hong Kong as a regional headquarters would have been undermined.

More fundamentally, Hong Kongers saw the law as the latest in a line of actions that have undermined freedoms guaranteed by Hong Kong’s basic law, just as President Xi Jinping has installed a more repressive system on the mainland. Leaders of the pro-democracy Occupy protests in 2014 have been sidelined or jailed, media outlets bought up by Beijing-friendly owners. The essence of “one country, two systems” — which allowed Hong Kong to maintain its own economic and administrative system for 50 years after 1997 — was seen as under threat.

Ms Lam insisted the extradition bill was prompted by the case of a Hong Kong citizen who could not be sent to Taiwan to stand trial for murder under the city’s existing laws. Few believe her claim that it was her initiative, not Beijing’s. Her decision to suspend it indefinitely appears aimed at saving face. While the suspension is welcome, the fact that it came only after Wednesday’s violent clashes, not after the peaceful march of hundreds of thousands a few days earlier, is regrettable.

To placate concerns of Hong Kongers — who demonstrated again in huge numbers on Sunday — that it could be revived, Ms Lam should withdraw the bill completely. City authorities should investigate, too, last Wednesday’s strong-arm police measures and reverse the designation of those protests as a riot, which leaves participants liable to prison sentences. While protesters are calling for Ms Lam to resign, however, that might risk Beijing replacing her with more of a hardliner.

In a world where might is increasingly seen as right, and the kind of amoral foreign policy espoused by US President Donald Trump appears in the ascendant, Hong Kong offers an example of moral and political boldness in the face of power. Western democracies should examine their own response. The UK has not been silent, but US politicians and institutions — if not Mr Trump — have responded more robustly, even though it was Britain that negotiated Hong Kong’s freedoms with Beijing. As a rising China looks to export its system and influence not just to Hong Kong but more widely in Asia, western capitals should stand up more vocally for democracies in danger.