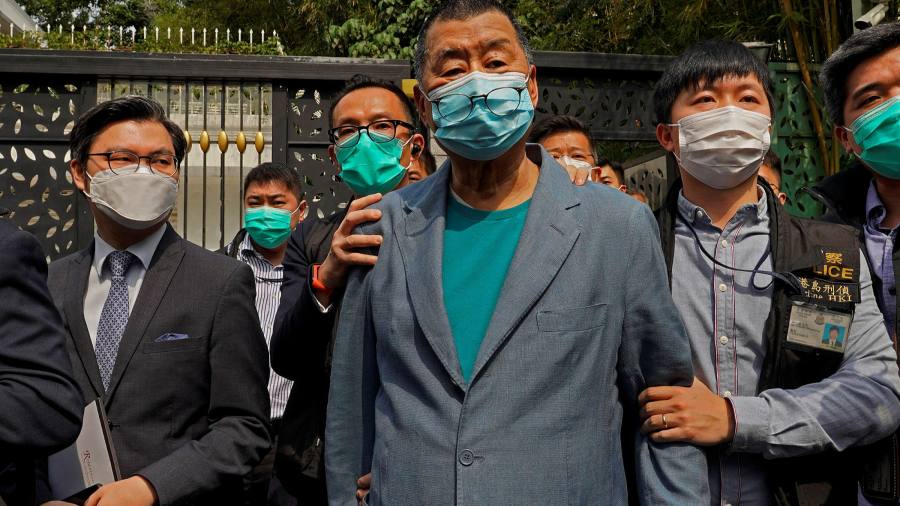 Police arrested 15 pro-democracy activists in Hong Kong on Saturday as Beijing seeks to reassert its authority after last year’s protests.

Martin Lee, an 81-year-old pro-democracy politician who helped write the city’s Basic Law and Jimmy Lai, 71, the founder of anti-Beijing newspaper Apple Daily were among those arrested. Both have been accused of being part of a “gang of four” targeting China.

The arrests followed allegations the activists were involved in organising unlawful assemblies and come as the city is distracted by coronavirus, which ended months of anti-government protests.

Sing Ming, a political scientist at the University of Science and Technology of Hong Kong said coronavirus could mean a weaker backlash against the arrests with the public preoccupied by concerns about job security and personal safety.

Beijing was also hoping to undermine the political resources of pro-democratic politicians ahead of the legislative council election scheduled for later in the year, Prof Sing said.

The UK foreign office said they were concerned about the arrests and urged Hong Kong authorities not to “inflame tensions”.

More than 7,000 people have been arrested for their involvement in the protests since June, many are charged with rioting which carries a maximum sentence of 10 years in jail.

Some of the group, including Mr Lee, were later released on bail. “I don’t regret what I’ve done. I felt proud, together with the young people of Hong Kong, to continue on the path of democracy,” he said.

The Basic Law, the semi-autonomous region’s mini-constitution, states that departments directly under the central government should not interfere in local affairs.

Opposition politicians have accused Beijing’s top office in Hong Kong of infringing on this framework which has granted the city autonomy from the central government since the handover.

Beijing’s top office in the territory then released a long rebuttal on Friday arguing that it was not restricted by the law to comment on Hong Kong affairs — taken by democrats as a sign China would take a more forceful role in local politics this year.

“When all countries are now busy combating coronavirus, the authoritarian regime of China is now clamping down on democracy movements in Hong Kong,” said Hong Kong Activist Joshua Wong on Twitter.