Hong Kong’s chief executive Carrie Lam has postponed elections for the city’s legislature, citing the coronavirus pandemic, in a move that drew swift condemnation from Washington.

The decision came a day after the government disqualified 12 pro-democracy candidates from contesting the election for the city’s de facto parliament, the Legislative Council, for reasons including their refusal to support a tough new national security law for the territory.

“If the election continues on September 6, it will not fit the requirements of a fair and open election. It will also put the health of voters, candidates, supporters and electoral staff at risk,” Ms Lam said. She invoked emergency powers to make the decision.

The territory’s pro-democracy parties had hoped to perform strongly in the poll, which will now be delayed for a year, after Beijing imposed the national security law.

The Trump administration condemned the decision to delay the poll and disqualify candidates, moves it described as “only the most recent in a growing list of broken promises by Beijing”. 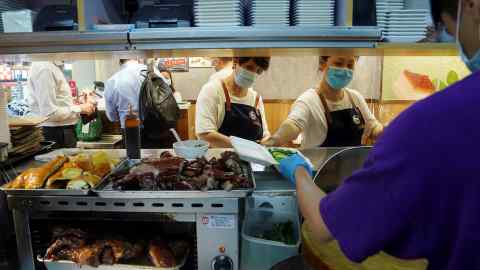 Jim Risch, Republican chairman of the Senate Foreign Relations Committee, told the Financial Times he was “deeply concerned” by the postponement of election.

“The Chinese Communist party set its sights on undermining these elections as soon as pro-democracy candidates swept the field in the last year’s District Council elections,” he said.

“The party is using its draconian national security law to crush Hong Kong’s autonomy in violation of an international treaty and suppress the rights of Hong Kongers. The US must continue to stand with and support the people of Hong Kong.”

Hong Kong was, until recently, praised for its handling of the coronavirus pandemic. But experts said the government’s introduction of an extensive system of quarantine exemptions, including for chief executives of listed companies, had led to a resurgence of the disease in the city.

The territory has been reporting record daily numbers of new cases during the past few weeks, bringing the total number of confirmed infections to 3,200 this week, with 27 deaths.

In a press conference, Ms Lam said the delay to the election was needed to meet social-distancing requirements and because many voters were in mainland China or overseas and would not be able to return in time to vote because of travel restrictions.

Hong Kong’s decision echoed recent comments by Donald Trump, US president, who has advocated delaying November’s US presidential elections because of coronavirus.

But critics of Ms Lam’s government said the delay to the Hong Kong election was part of a crackdown after Beijing abruptly introduced the national security law this month.

“No one believes that it is not politically motivated,” said Ma Ngok, a professor of politics at the Chinese University of Hong Kong. This was even more plain considering that the public were still going to work and using public transport, unlike in other countries, he said.

Hong Kong’s new security legislation makes crimes such as subversion, secession, terrorism and colluding with foreign elements punishable with up to life imprisonment. Pro-Beijing supporters have said it is necessary to end the protests of the past year, but critics argue that it undermines the autonomy promised to the city on its handover to China from the UK in 1997.

Authorities this week arrested four students, including at least one teenager, for forming a group to advocate for Hong Kong independence on social media, in the first such arrests under the legislation.

In what analysts said was a further sign of Hong Kong’s loss of political autonomy, Ms Lam said China’s national legislature, the National People’s Congress standing committee, would decide how to deal with any disruptions to the Legislative Council caused by the delay to the election.

Critics saw another worrying sign for Hong Kong’s legal system on Friday. Teresa Cheng, the secretary of justice, confirmed that the territory’s director of public prosecution, David Leung, had abruptly resigned. In a message to his colleagues labelled as “explosive” by one city barrister, Mr Leung said he did not see “eye to eye” with Ms Cheng.

The independence of the city’s courts is a chief concern of the international business community in the Asian financial hub.

Will a flurry of European bond sales disturb the summer lull?

China cleans up in Latin America as US flounders over coronavirus