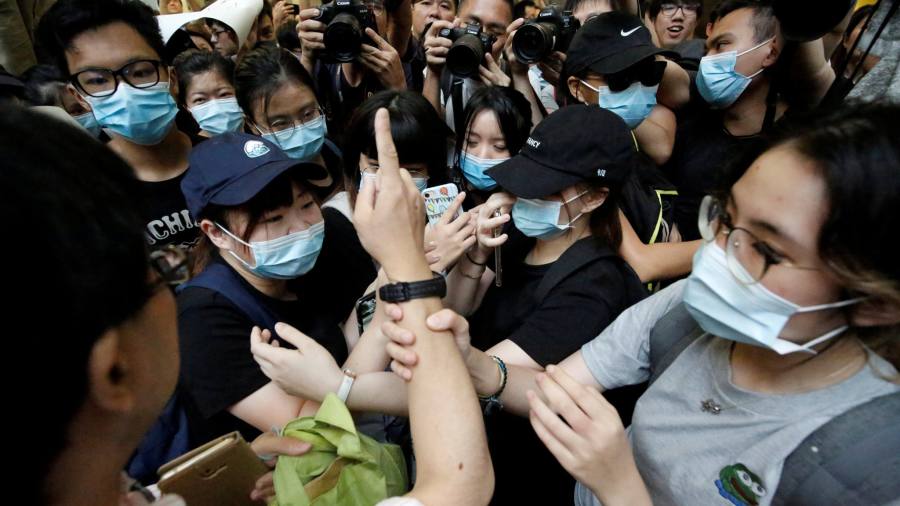 When thousands of young protesters dressed in black flooded a major road in Hong Kong to protest against the now suspended extradition bill, the legacy of an earlier uprising, the unsuccessful 2014 Umbrella Movement, was evident.

Demonstrators in their teens and early 20s swarmed the same road next to Hong Kong’s legislature that had been the focal point of the three-month-long occupation calling for universal suffrage in 2014. Again, supply stations offered snacks, anti-tear gas goggles and cable ties to build barricades. Calls for water from deep in the crowd were answered by bottles passed hand to hand, as if there were some sort of protest muscle memory. But this time around, protesters wore surgical masks to shield their identities — the 2014 leaders received prison sentences.

This June has seen some of the largest demonstrations in Hong Kong’s history: business groups, lawyers and mothers all spoke out against legislation that would allow the extradition of criminal suspects to China. Organisers claim that two peaceful weekend marches drew 1m and 2m people respectively.

But the June 12 protest at the legislature ended with police firing 150 tear gas canisters and rubber bullets. A few days later, protest veteran Christy, 22, told me she was using skills learned during the Umbrella Movement to help protect first-time demonstrators. “To me, tear gas and pepper spray are just a nuisance,” she said, explaining that less experienced participants had panicked in the clouds of gas and had to be pulled away to safety.

There are meaningful differences between this round of protests and 2014’s. Back then, demonstrators were directly challenging mainland China over the selection method of the Hong Kong chief executive. They feared the plan to have candidates screened by a nomination committee would limit the selection to pro-Beijing names. Then, the unsuccessful protests sought to expand democracy in the territory.

By contrast, the extradition bill that reawakened discontent in April was seen as a severe blow to existing freedoms that were supposed to be protected by the agreement that handed the territory to China from Britain in 1997. It was put forward by Hong Kong chief executive Carrie Lam, allowing officials in mainland China to distance themselves from the legislation once it proved unpopular.

Ms Lam initially refused to withdraw the legislation after the first peaceful march and stood by the police designation of the June 12 protest as a riot. She then backed down and “suspended” the extradition bill. That move only succeeded in drawing up to 2m people — more than a quarter of the territory’s population — out for a second Sunday of peaceful marches calling for her resignation.

Eva Chow, 62, was part of a group of current and former students of Ms Lam’s school who joined the second march. As they shouted “Carrie Lam, shame on you!” Ms Chow said she had little expectation of receiving a satisfactory government response. “This is what we can do for the time being, but we don’t know whether the outcome will make things better,” she said.

The protesters are continuing to build on the concept of civil disobedience spread by Benny Tai, a law professor who is still serving jail time for his part in the 2014 protests. The group motto, “Be water, my friend”, borrowed from martial artist Bruce Lee, is designed to express the fluid nature of the protests with the goal of keeping the public onside by limiting the impact on daily life — one criticism of the 2014 movement.

The demonstrators have also been bolstered by last week’s release from prison of Joshua Wong, the face of the Umbrella Movement. But his role may be more limited this time — so far, the anti-extradition bill protesters are making decisions after group consultations and distributing them through messaging apps. “It would be the same mistake if we had a leader we could blame; it’s better to follow our own will and make our own decisions,” Christy explained.

For now, they have scored a limited victory: shelving the bill simply maintains the status quo. The lessons of 2014 suggest that holding on to freedoms will be a more difficult battle.