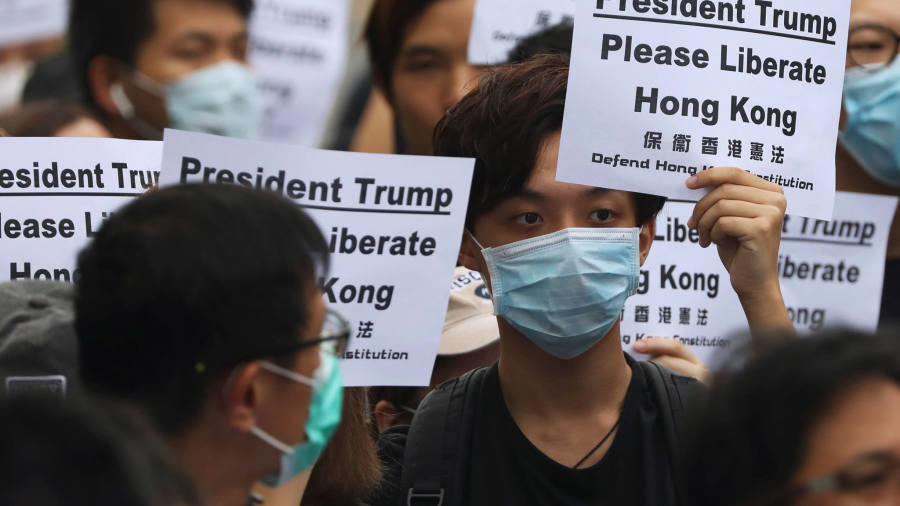 Hundreds of protesters in Hong Kong delivered petitions to the consulates of G20 members asking the countries to defy China at their meeting this week and insist on discussing the recent mass protests in the territory.

Beijing said on Monday that it would not allow the topic to be raised at the conference. However, Mike Pompeo, US secretary of state, said last week that he expected the protests would be among the issues US President Donald Trump would discuss with his Chinese counterpart Xi Jinping when they meet at the G20 in Japan.

Demonstrators wearing T-shirts bearing the phrase “Liberate Hong Kong” started their march at the US consulate where they delivered their letter calling for American support.

The action is the latest in a series of mass protests against a controversial law proposed by the Hong Kong government. If passed, the proposed law would also apply to foreign nationals in the territory and allow extradition from Hong Kong to China for the first time.

In response to the mass protests — an estimated 1m and 2m people joined consecutive Sunday demonstrations earlier this month — Hong Kong’s government suspended attempts to get the bill through parliament, but stopped short of withdrawing it.

The letter delivered to the US consulate called for Mr Trump’s “urgent intervention” to persuade authorities in Hong Kong to withdraw the extradition bill. It also requested international backing for an independent investigation into the use of tear gas and rubber bullets by police to disperse protesters on June 12.

“We would greatly appreciate an intervention, in the hope of a complete withdrawal of the extradition bill and an independent, open investigation on the possible use of excessive violence by the Police Force against us,” the letter signed by Hong Kong citizens, said.

Separately, Jeremy Hunt, the UK foreign secretary, on Tuesday said the country would not issue export licences for crowd control equipment to Hong Kong until a “robust, independent investigation” into the violence. Mr Hunt added that the results of that probe would “inform our assessment of future export licence applications to the Hong Kong Police”.

Chemring Group, a British defence company, earlier this month confirmed it had an export licence with Hong Kong after campaigners claimed an N225 CS grenade made by the manufacturer had been used by officers at the protests.

The Civil Human Rights Front, an organiser of earlier massive rallies, has called for protesters to reassemble for a “G20 Free Hong Kong” demonstration on Wednesday night in the centre of the city.

Activists had raised HK$6.7m ($858,302) by Tuesday to buy advertising space in international newspapers to publish an open letter outlining their concerns over the bill to coincide with the G20 meeting.